Like everyone else in the world (and how odd for that not to be hyperbole, though our timelines have differed) I have spent the past week adjusting to the unprecedented risks and disruptions created by the spread of COVID-19. Friday March 13 began as a more or less ordinary day of classes: the cloud was looming on the horizon, reports were coming in of the first university closures in Canada, and we had been instructed to start making contingency plans in case Dalhousie followed suit. But my schedule that day was normal almost to the end: I had a meeting with our Associate Dean Academic to discuss my interest in trying contract grading in my first-year writing class; I taught the second of four planned classes on Three Guineas in the Brit Lit survey class and of four planned classes on Mary Barton in 19th-Century British Fiction. The only real break from routine was a brisk walk down to Spring Garden Road at lunch time to pick up a couple of items I thought it might be nice to have secured, just in case: Helene Tursten’s An Elderly Lady Is Up to No Good for my book club, which I knew had just come in at Bookmark, and a bottle of my favorite Body Shop shower gel (satsuma! it is such a sunny fragrance)–hardly essential, but potential pick-me-ups for hard times to come.

Just before my afternoon class, however, we got the news that classes were being suspended as of Monday March 16: it’s a measure of how distracted I actually was, despite the veneer of normalcy, that I didn’t quite process the details and thought for a while that we would still be in classes at least until Wednesday (which is the date the memo told us to have our detailed plans ready for the rest of the term). The first scheduling casualty was the department talk scheduled for that Friday afternoon: I was supposed to be introducing what I’m sure would have been a very interesting talk from Tom Ue on ‘Gissing, Shakespeare, and the Life of Writing,’ but though Tom had come out from Toronto already, the decision was made not to go ahead with it. I suppose it’s true it would have been hard for people to settle down and pay attention, under the circumstances, not to mention inconsistent with the escalating imperative to ‘social distancing.’

So I packed up and went home–but still, I realized later, without having quite focused on what was happening. For example, I brought home not just the books we were in the middle of but the books that are (were) next on the class schedule, because it still seemed plausible that we would be doing something like actually finishing the courses as originally planned. And I did not bring home a stack of books that it might just be nice to have copies of at home–any of my Victorian novels, for instance. I own around a dozen copies of Middlemarch, and right now every one of them is out of reach! We are still allowed into our building, and I’ve been thinking I should go get one, and maybe some Trollope. I can’t tell if this really makes much sense, though. I mean, it’s not like I don’t have a lot of books to read right here with me, and I also have e-books of a lot of 19th-century novels because when I bought my first Sony e-reader, years ago, part of the deal was a big stack of free classics to go with it. So what if I don’t like reading long books electronically: I could get used to it. It would be a pretty low-risk outing, given that the campus is basically a ghost town at this point, but I think it’s really psychological reassurance I would be seeking, not reading material, and what are the odds that seeing familiar places I can’t really go back to for who knows how long would actually be comforting?

Anyway, it quickly became clear that the right strategy (and, to their credit, the one our administrators have been urging) is not to try to replicate electronically all of our plans for the last few weeks of term, including the final exam period, but to smooth students’ paths to completion as best we can: dropping readings and assignments and giving them options including taking the grade they have earned so far but still also allowing another chance to do better in as painless a way as we can think of. I think the options I came up with for my classes are pretty good, in these respects, but it may be that they don’t go far enough, because this is all turning out to be so much harder than it sounded a week ago–and of course however we might (or might not!) be managing, our students have their own specific circumstances which may make even the most “reasonable” alternatives too much. I have been feeling a lot of regret about the books we won’t get to, especially The Remains of the Day, which I was increasingly excited about as the capstone text for the survey class–what a good book to read right after Three Guineas! As for Three Guineas itself, I was so excited about teaching it for the first time. It’s definitely going back on my syllabus the next time it fits the brief. Sigh.

One of the most emotionally painful parts of all of this has been the abrupt severance of personal relationships, which is what teaching is really all about. I have put course materials together to get us to the end of our current texts, but it is much less rewarding scripting them than it is taking my ideas and questions in to meet them with and seeing what comes of our encounter. Sure, it doesn’t always go swimmingly, but that just means you try again, or try something different. I know there are ways to include more personal and “synchronous” interaction (as we’ve quickly learned to label it!) in online teaching, and of course as someone who spends a lot of time online I already believe that you can cultivate meaningful relationships without meeting face to face. There just isn’t time for that now, though, and also the demands those tools put on everyone to be available and attentive at the same time are all wrong for our immediate circumstances. It isn’t just about finding ways to get through the course material together either: there are students I have been working with for years who it turns out I saw in person for maybe the last time that Friday without even knowing it. I have been thinking about them, and about all of my students, so much since that hectic departure from campus and hoping they know how much I have valued our time together and how much I already miss them! 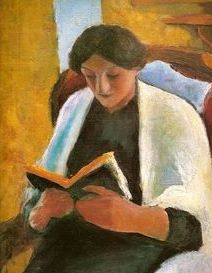 And now, I guess, it’s time to settle in to what people keep euphemistically calling “the new normal.” Here in Halifax we are under strong directions for social distancing; I’ve heard rumors that something more rigorous might be coming, in the hope of really flattening that infamous curve. There are lots of wry jokes and memes about readers or introverts or others whose habits and preferences mean they have been “preparing for this moment our whole lives.” We live a pretty quiet life ourselves, so to some extent this is true of us as well (though not of Maddie, who like many young people is going to be very well served by the various ways she and her friends can stay in touch virtually). It’s pretty different having to stay home, though, and also worrying whenever you go out, even if it’s only for essentials. It’s also not spring yet here–I envy my family in Vancouver the softening weather that makes walks and parks and gardens good options. I am grateful, though, that we are comfortable and together and, so far, healthy. I am also glad I did pick up An Elderly Lady Is Up to No Good, because I finished reading it this morning and it is a nice bit of twisted fun…about which more soon, I hope!

I’m thinking about all my blogging and Twitter friends a lot too and I am so glad we have these networks to keep us connected. May we take strength and comfort from each other even from our usual distance!

4 thoughts on “This Week In My Classes: Going Remote”