It hasn’t been a good stretch for me in my romance reading. I haven’t read anything since Love Lettering that I expect to re-read, which for me is the real sign of success: since I found my groove as a romance reader (nearly a decade ago, now!), romance has filled a nice niche for me as my go-to genre for incidental reading, books that divert, distract, and cheer me when I don’t have the time or am not in the mood for heavier options. I don’t mean to belittle the genre at all with this characterization. I have always read and reread books in that spirit, but they used to be mostly ‘light’ mysteries (Dick Francis, for instance) or relatively undemanding but satisfying general fiction (Anne Tyler, Joanna Trollope). I still reread old favorites in those genres too, but now my interstitial reading (as I have come to call it) also includes Georgette Heyer and Loretta Chase, Courtney Milan and Kate Clayborn.

What is it that makes rereading–sometimes frequent rereading–pleasurable? Why do some books invite and reward it and others not? I reread for a living, of course, and for the books I teach the answer usually has to do with complexity: with layers of meaning and intricacies of language or form. Books teach well that don’t reveal themselves completely on a first try–otherwise what is there to talk about, after all? The better you know a book like that, the more you appreciate on each reading: the pleasure itself gets more complicated and multidimensional. That’s not (or not quite, or not usually) the same with the mysteries or romances I reread, though–or with writers like Anne Tyler, whose novels are many good things, including smart, touching, and subtle, but not particularly layered or complicated. You might notice more details on rereading, or see some connections or patterns that you missed the first time through, but for me anyway, rereading these books is about familiarity, not novelty, about confirmation rather than revelation. The pleasure comes from watching things unfold again as you already know they will, and enjoying again what you enjoyed before, whether it’s witty banter, angst-ridden suspense, sparky sexual tension, or whatever genre tropes the novel is built around. 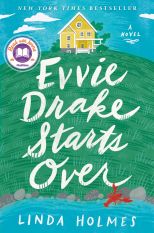 But not every romance novel inspires rereading for me, even if I enjoyed it just fine the first time. Sometimes there’s an obvious problem–stilted prose, unconvincing characters, a plot that feels too utterly contrived, leaden dialogue–but others fall flat for no reason I can really put my finger on. The recent string of books that prompts this post included just one of the first kind (Tessa Dare’s The Wallflower Wager, which felt creaky from the get-go and then lumbered predictably along while trying to be spritely and witty, which is the worst effect for me) but mostly books of the second sort, where nothing was overtly wrong but they still didn’t do much for me. Get A Life, Chloe Brown was like that–it was perfectly fine, sometimes even charming, but when I was done, it went straight into the ‘donate’ pile. Ditto Mhairi McFarlane’s Don’t You Forget About Me, and Lucy Parker’s Headliners, and Alyssa Cole’s A Duke by Default. This morning I finished Linda Holmes’s Evvie Blake Starts Over and overall I enjoyed it the most of this recent batch–though I’m not 100% sure it qualifies as romance. (It sits on the fuzzy line between contemporary romance and “chick lit” or “women’s fiction,” especially as it doesn’t quite serve up the requisite HEA–its ending is a very nice happy-for-now one.) If I went back a couple of months, I could give a much longer list of titles–very few of them actually bad but also few of them particularly good. (In romance as in all reading, of course, YMMV, and these are all books others have enjoyed a lot. Love works in mysterious ways, I guess! As we say on Twitter, “don’t @ me.” 😉 )

When I mentioned my discouraging string of “meh” romance reads on Twitter, Liz (who, more than perhaps anyone else, got me into reading romance in the first place!) commented that she “might be off romance for good.” It’s not (I am sure she meant) that she has lost respect for or interest in the genre overall, but that it gets tiring (and boring) having to read through so many to find the ones you like. This is certainly true of my own experience of romance, at any rate. There are lots of contributing factors to the skewed hit-to-miss ratio: the sheer quantity of books, for one thing, and the equally wide-ranging variety of readers and tastes they serve. Marketing–covers, blurbs, hype–makes useful discernment a challenge (this is true of all the genres I read, but the problem feels more pronounced with romance), as does the (perfectly understandable) desire of romance readers and writers to support each other and the genre they love, which is so frequently reviled and misrepresented.

Although my relationship with romance has come a long way since my first skeptical and ill-informed attempts at reading in the genre, I do sometimes get fed up. As I mentioned in that Twitter conversation, I “DNF” romance novels far more often than books of any other kind, and while it’s possible that this result is mostly about me (as a reader or a person, who knows) it’s hard not to think it also says something about the genre, though what exactly that is, I’m not sure. But it’s also true that most romance novels are relatively fast reads, which is why I can get through so many of them in such a short time. Perhaps, proportionally, the hits and misses are not really that out of line with the rest of my reading–they just stack up more quickly! That also means that each romance novel on its own is a fairly low risk endeavor (certainly compared to, say, Ducks, Newburyport, which so far I dislike much more intensely than any of the romances I have picked up and put down without finishing, and which will require a vastly greater investment of time and effort to get the rest of the way through). Moreover, when I do find a romance novel I really like, the pay-off is disproportionately large because of how often I am likely to end up rereading it. I have now read all three of Kate Clayborn’s ‘Chance of a Lifetime’ trilogy three or four times each, for example, and will no doubt reread them again before too long; the same is true of Cecilia Grant’s ‘Blackshear Family’ series, the first one of which, A Lady Awakened, I recently reread with great pleasure. There are even some individual scenes that make the whole exercise worthwhile! Sometimes I pick up Heyer’s Devil’s Cub just to reread the chapter in which Mary, all unwitting, tells the Duke of Avon about her misadventures with his wayward son Vidal: it’s the perfect antidote for a fit of gloom, a reliable dose of “restorative pork jelly” (an allusion other Heyer readers will appreciate!).

Discovering that, if it’s the right one, a romance novel is the best bookish friend imaginable–always there when you need it and sure to cheer you up–is the happiest result of my now decade-long romance reading adventure. In the end, that’s what keeps me trying again and again even when it starts to seem that the ones I really like are few and far between: when I do find them, the rewards outweigh the accumulated tedium of the many others that weren’t for me. If that balance ever tips too far the other way, I too might go off the genre, though I can’t imagine clearing out my collection of favorites, which is a sign of much I have come to value romance as part of my reading life. It feels apt (if a bit trite!) to point out that my optimistic pursuit of just the right book for me is a bit like the stories romance novels themselves tell–which I guess means it’s rereading that turns out to be the real HEA!

6 thoughts on “Romance and Re-Reading”