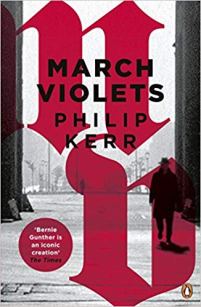 I didn’t much like March Violets–it just didn’t work for me. I should perhaps have anticipated this: in general, noir fiction isn’t really my thing. But I didn’t expect Kerr to go all in on his imitation of Raymond Chandler. Stylistically at least, I think I would have liked it better if he’d gone all in as the next Dashiell Hammett. I have to grit my teeth to get through the metaphorical excesses of The Big Sleep, and Kerr’s, while less florid, also seemed less poetic and a lot more forced. I also think there’s no excuse for perpetuating the sexism of classic hard-boiled detective novels in a contemporary pastiche. In fact, while I find Philip Marlowe’s misogyny disturbing, I give Chandler credit for showing the price Marlowe pays for it, in his embittered isolation, while Bernie Gunther’s sexism (“Her breasts were like the rear ends of a pair of dray horses at the end of a long hard day”) serves only to show off Kerr’s own hard-boiled credentials. (“There’s only one thing that unnerves me more than the company of an ugly woman in the evening, and that’s the company of the same ugly woman the following morning.”)

There were certainly things about March Violets that I thought were well done. The historical setting is one: Kerr really effectively conjures up the atmosphere of 1936 Berlin–the violence and brutality, the pomp and posturing and power-brokering, the shady corners and the moral gray areas. The plot was pretty convoluted, but that’s authentically Chandleresque, for better and for worse. I was amused by the metafictional interlude with the SS officer who is a crime fiction aficionado. “Part of the image, eh?” he says to Bernie when he takes a refill of schnaps:

“And what image would that be?”

“Why, the private detective of course. The shoddy little man in the barely furnished office, who drinks like a suicide who’s lost his nerve, and who comes to the assistance of the beautiful but mysterious woman in black.” 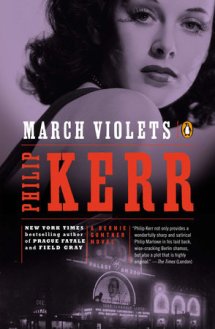 When Bernie gets smart with him, the officer observes that “the ability to talk as toughly as your fictional counterpart is one thing … Being it is quite another.” I can’t imagine any reader of March Violets needing any such overt signals of Kerr’s knowingness about genre conventions, as there’s nothing subtle about his attempt to recreate the feeling and many of the themes of his hard-boiled predecessors, but it was still a nice light moment in an otherwise dour novel.

Something that really didn’t work for me was the episode in which Bernie goes “undercover” at Dachau. One problem, I thought, was that Kerr handled it badly: it seemed obvious that he took the responsibility of writing about Dachau seriously and the result was a tonal shift and some sudden onset “info-dumping” as Bernie turned from cynical private eye to eloquent witness (“Work sufficient to destroy the human spirit was the aim of Dachau, with death the unlooked-for by-product”). The whole sequence (which was also wildly implausible) felt like a device, a gimmick to give Kerr the opportunity to include Dachau in his scene setting–and that, in turn, felt tasteless to me.

Kerr’s concept–to revisit Chandler’s “mean streets” in the context of fascism and the fear and instability it brings, when everyone might be an informer and nobody’s life (or death) is really worth inquiring into very closely–is a really good one, and Bernie’s attempt to negotiate this world while being (in Chandler’s terms) “neither tarnished nor afraid” sets up what I can imagine become a lot of morally interesting scenarios as the series goes on. I didn’t enjoy reading March Violets, though: its tone just didn’t suit. I finished it thinking that rather than reading any further in this series, I’d rather read more of Maurizio de Giovanni’s Commissario Ricciardi series. They too take us down the mean streets of fascism, but they have a gravity to them–an elegance, almost, and a sadness–that I find more appealing than Kerr’s noir nastiness.