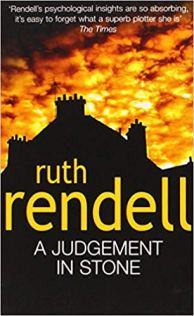 In those moments the words they cried and their pleas passed over her almost unheard, and by some strange metamorphosis, produced in Eunice’s brain, they ceased to be people and became the printed word. They were those things in the bookcases, those patchy black blocks on white paper, eternally her enemies, hated and desired.

“Eunice Parchman killed the Coverdale family because she could not read or write” is the chilling first line of Ruth Rendell’s 1977 thriller A Judgement In Stone. I’m not sure “thriller” is the right word, but “mystery” seems wrong, as obviously it is not a whodunit–and if you take that opening sentence at face value, it is not a “whydunit” either, as Rendell immediately gives away both the name and the motive of her murderer. The only suspense in A Judgement In Stone comes from wondering exactly how the massacre will happen, and it is a testament to Rendell’s skill as a storyteller that the novel is in fact gripping in spite of our already knowing who, what, when, and why.

A Judgment In Stone relies heavily on narrative devices that could easily turn into gimmicks: dramatic irony and foreshadowing. Rendell uses dramatic irony to cast a grim shadow over the lives of the Coverdale family: one of the most effective things about the novel, I thought, is how we read it doubly, as a very ordinary story of a well-to-do English family going about their privileged but otherwise basically inoffensive lives. There’s handsome George, “as trim of figure as when he had rowed for his university in 1939”; there’s Jacqueline, his second wife, “fair, slender, a Lizzie Siddal matured,” unfortunately for all of them overwhelmed with the work of maintaining Lowfield Hall; and there are the children of this blended family, including eccentrically bookish Giles and sweet-tempered Melinda. They all contribute to their eventual violent deaths by the way they treat Eunice Parchman when she becomes their housekeeper, but until the very last minute–their very last minutes–we are the only ones who know how it will all end. The effect is to infuse their commonplace activities–shopping, dining, listening to music, going to parties–with pathos, to make their cheerfully unexceptional characters accidentally tragic. “I’ll be two minutes,” says George as he goes to check what the noise is in the kitchen;

He went to the door where he paused and looked at his wife for the last time. Had he known it was the last time, that look would have been eloquent of six years’ bliss and of gratitude, but he didn’t know, so he merely cast up his eyes and pursed his mouth before walking across the hall and down the passage to the kitchen.

Rendell adds extra shots of menace occasionally with moments of explicit foreshadowing. When her parents have offended Eunice by banning her only friend from visiting Lowfield Hall, for instance, Melinda decides to intervene by being kind:

So that evening Melinda began on a disaster course that was to lead directly to her death and that of her father, her stepmother and her stepbrother. She embarked on it because she was in love. It is not so much true that all the world loves a lover as that a lover loves all the world. Melinda was moved by her love to bestow love and happiness, but it was tragic for her that Eunice Parchman was her object.

There is so little out of the ordinary about the Coverdales that they could hardly be the subject of fiction if it weren’t for what happens to them. Shortly before their deaths, they eat out, and “afterwards the waiters and other diners were to wish they had taken more notice of this happy family, this doomed family.” 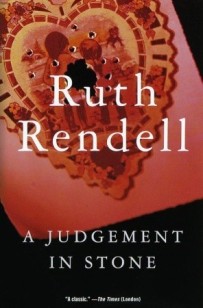 Is it true that Eunice Parchman–and her accomplice, the same friend the unknowing Coverdales tried to keep away from their home–killed this hapless family “because she could not read or write”? Rendell’s striking opening is as much provocation as declaration, I think. It is certainly true that Eunice’s illiteracy haunts, shames, and distorts her life. It is easy to imagine a version of her story in which, as a result, we pity her and direct our antipathy at a society that repeatedly fails her–fails to educate her, fails to support her, fails to make it safe for her to overcome this debilitating disadvantage–while she retreats into the safety of suspicious solitude:

When she was a child she had never wanted to read. As she grew older she wanted to learn, but who could teach her? Acquiring a teacher, or even trying to acquire one, would mean other people finding out. She had begun to shun other people, all of whom seemed to her bent on ferreting out her secret. After a time this shunning, this isolating herself, became automatic, though the root cause of her misanthropy was half-forgotten.

There are lots of painful and potentially poignant scenarios as which she struggles to hide her inability to read the family’s grocery list or to identify which papers George needs sent from home to his office. There’s something sad, too, about her absorption in the television the Coverdales provide for her room. She’s finally happy there:

She drew the curtains, put on the lamps and then the television. Her evenings were hers to do as she liked. This was what she liked. She knitted. But gradually, as the serial or the sporting event or the cops and robbers film began to grip her, the knitting fell into her lap and she leant forwards, enthralled by an innocent childlike excitement.

It’s not much, but it’s all she wants.

But this sad story is not quite what Rendell gives us–and surely that’s as it should be, unless we really do believe illiteracy leads inexorably to homicide! Instead, Eunice is a completely unsympathetic character. It’s not just the shell she has withdrawn into for fear her inability to read will be discovered. By the time she starts work at Lowfield Hall she has already committed murder: she killed her own father, who was taking a bit too too long to die: “She took one of the pillows from behind her father’s head and pushed it hard down on his face. He struggled and thrashed about for a while, but not for long.” It’s the combination of her heartless personality with the shame and anxiety of her illiteracy that’s toxic–that, and the influence of her friend Joan, who is out and out deranged, “daily growing more and more demented.” I think I would actually have liked A Judgement In Stone better if it vested responsibility for the Coverdales’ deaths squarely in Eunice and explored the ramifications of her illiteracy in a more nuanced way, rather than having it shade into moral and psychological deficits. Joan’s role is especially disappointing in this respect, as there is no “good” explanation for her behavior, no cause beyond her own unreason for the violence she instigates. 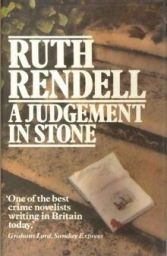 Rendell’s opening line is thus a bit of a feint, I think: it seems to set up a novel about the consequences of social and educational failures, but unlike, say, Dickens’s account of Magwitch’s history in Great Expectations, she doesn’t really account for Eunice’s criminality on those terms alone, leaving us to point the finger at ourselves for creating an uncaring system that generates criminals where there should have been (and still could be) a caring human being. Eunice seems irredeemable; Rendell doesn’t make a convincing case that she would have been a different person–and the Coverdales would have lived–if only she could read the printed word. It’s hard to be sure, though, and maybe that’s the question Rendell means to leave with her readers.