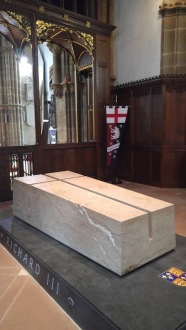 The George Eliot Bicentenary Conference was the main reason for my recent trip to England, but of course I took advantage of having crossed the pond to do a bit of sightseeing. I spent a couple of days in London on either side of the conference, and I also traveled to Leicester a day ahead of time so I could visit the Richard III Visitor Center and Richard’s new tomb in Leicester Cathedral.

My 2012 essay “All the World to Nothing” in Open Letters Monthly explains my longstanding fascination with Richard III and includes a delightfully (or mortifyingly) geeky photograph of a much younger me beside his statue in 1986. I could not quite recreate that picture on this trip, but I did take a selfie next to the model of his head made by experts in facial reconstruction after his skeleton was discovered under a parking lot and then confirmed as his. (It’s a remarkable story; the documentary about it is available here if you’re interested.) The excavation site was protected when the parking lot was repaved and you can see where he was actually found, under the floor of the long-gone Grey Friars Church. Even the intrusively chatty volunteer stationed by it could not completely dispel the haunting feeling of actually standing where his ruined body had lain for 500 years. (Bless her heart, she was just enthusiastic, but she would keep telling me things I already knew!)

I expected to be moved by seeing Richard’s grave, and I was. It has been a long time since I felt the warm partisanship on his behalf that Tey’s The Daughter of Time once sparked: it wasn’t fervent Ricardianism in real time that made this visit emotional so much as being reminded of how ardently I was once involved in it all and feeling connected, through these remarkably concrete (no pun intended!) links between past and present, to my own history. Walking through the exhibit, viewing the burial site, visiting the Cathedral–I was paying my respects to Richard’s memory but also to the person I used to be. It renewed a kind of personal continuity that can seem, living as I do far from my family, away from the sites and landmarks of my own past, disconcertingly fractured. “Where did she go, that girl?” I sometimes wonder; perhaps oddly, there among the stones and relics of a place even further from my old home, I felt sure she was still there. 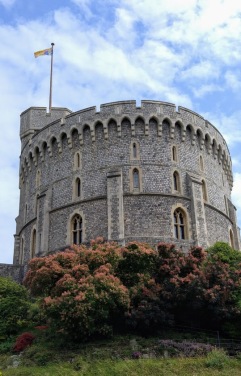 That sense of reconnecting with my former self is part of what always makes time in London feel so special to me. After my trip there in 2009, I also remarked that I felt “renewed” by the experience. This time too I was, as I wrote then,

most moved by those [sights] that most vividly reminded me of Carlyle’s words about Scott, that he had “taught all men this truth … that the bygone ages of the world were actually filled by living men, not by protocols, state papers, controversies and abstractions of men.”

On this visit I returned to some of the same places I went to in 2009 and also in 2011, when I was in England for a conference in Birmingham–including (of course!) most of the same bookstores. I especially enjoy wandering the streets and squares of Bloomsbury, which in their shabby elegance feel strangely homey to me: it’s easy to imagine not just Woolf and her cohort but Brittain and Holtby striding along or settling on a shady bench deep in conversation. I visited Windsor Castle for the first time on this trip, and it is grandiose and impressive; it was thrilling to walk between the towering walls that housed so many historical icons and breathtaking to look down in St. George’s Chapel and see that Henry VIII was buried below my feet. But it felt more personally meaningful just to sit in Gordon Square and be myself for a while, temporarily unencumbered by external obligations or expectations about who I am or what I should be doing, now or next. That freedom is one of the great luxuries of any holiday, of course, and it’s as risky as it is easy to fall into the fantasy that if you could only stay somewhere else, you could magically be someone else, someone you might like a little better, someone who lives (and writes) better than the person you are when you’re at home.

One of the repeat visits I made on this trip was to the Dickens Museum, which I had visited with my mother in 2009 but not since. I wanted to go back because in the intervening decade I have spent so much more time reading and thinking about Dickens’s novels. In the meantime, too, the museum has acquired the writing desk Dickens used in his house at Gad’s Hill Place: 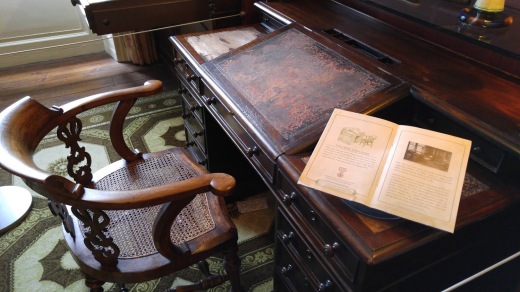 To many of us, this desk and chair are familiar from Luke Fildes’ “The Empty Chair,” painted in 1870 after Dickens’s death:

Seeing this desk was the first of what turned out to be several occasions when I found myself unexpectedly tearing up. Another was when I stumbled across some original monthly issues of Bleak House at the V&A: 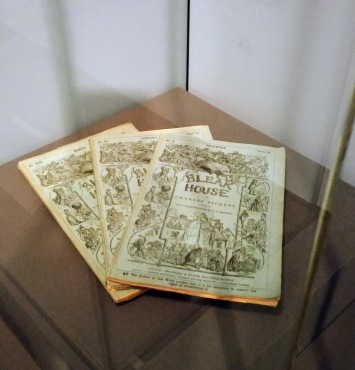 Another was as I strolled the lovely grounds of Arbury Hall, the manor house on the estate George Eliot’s father Robert Evans managed:

We visited other places on our George Eliot tour–a highlight of my trip overall–but for some reason this was the one I responded to most emotionally.

But why? Not just why did seeing Arbury Hall move me so much but why was I so emotionally susceptible to seeing those bits of Bleak House or standing next to Dickens’s desk? I am used to feeling excited when I see things or visit places that are real parts of the historical stories I have known for so long, but I have not previously been startled into poignancy in quite the same way. Is it just age? I do seem, now that I’m into my fifties, to be more readily tearful, which is no doubt partly hormones but which I think is also because of the keen awareness of time passing that has come with other changes in my life, such as my children both graduating from high school and moving out of the house–an ongoing process at this point but still a significant transition for all of us. Also, as I approach twenty-five years of working at Dalhousie, and as so many of my senior colleagues retire and disappear from my day-to-day life, I have had to acknowledge that I am now “senior” here, and that my own next big professional milestone will also be retirement–it’s not imminent, but it’s certainly visible on the horizon.

Perhaps it’s these contexts that gave greater resonance to seeing these tangible pieces of other people’s lives, especially people who have made such a mark on mine. Though I have usually considered writers’ biographies of secondary interest to their work, there was something powerful for me this time in being reminded that Dickens and Eliot were both very real people who had, and whose books had, a real physical presence in the world. People sometimes talk dismissively about fiction as if it is insubstantial, inessential, peripheral to to the “real world” (a term often deployed to mean utilitarian business of some kind). But words and ideas and books are very real things, and they make a very real difference in the world: they make us think and feel differently about it and thus act differently in it. Another of my London stops this time was at The Second Shelf , where I held first editions of Silas Marner and North and South in my hands (very carefully!). I described this on Twitter only slightly hyperbolically as the closest thing I could have to a religious experience. In the presentation I gave at the conference, I quoted from George Eliot’s poem “O, may I join the choir invisible”:

O, may I join the choir invisible
Of those immortal dead who live again
In minds made better by their presence …

There’s no question that she lived up to this wish. It’s hard for me not to feel a bit as Dorothea does, though with a more deserving object: “what a work to be in any way present at, to assist in, though only as a lamp-holder!”

Even so, I’m still not entirely sure why it kept making me cry to be in proximity to what one person I spoke with about it aptly called the “materiality” of these writers’ lives. But it seems right to give Dickens the last word on this: “Heaven knows we need never be ashamed of our tears, for they are rain upon the blinding dust of earth, overlying our hard hearts.”

8 thoughts on “Crying Over Bleak House: My Sentimental Journey”