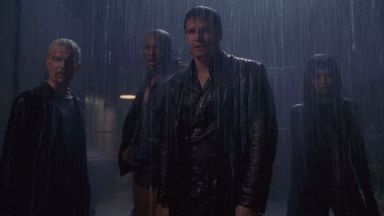 I recently finished my first complete run-through of Angel. I can tell that, as has already been the case with Buffy, re-watching will complicate my response to particulars as well as to the show overall. It’s interesting to me, though, that I can already imagine watching it again (though maybe not all of it, especially not the second half of Season 4, which I really did not enjoy). Like Buffy, Angel seems to do things that are worth taking another look at after the dust has settled, after you know the answer to “what happens next?” There are ideas at stake in it, sometimes confused or swamped by the action, but at other times driving it towards moments of real insight. Unlike the other shows I happily rewatch in order to bask in their familiar pleasures, Angel and Buffy are shows that seem to change, and often deepen, when you go back to them. 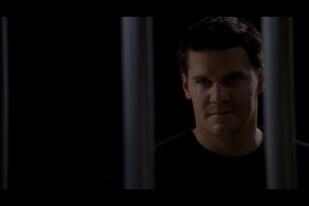 My initial thought at this point is that overall, while I like Buffy the series better than Buffy the character, I like Angel the character more than Angel the series. I would happily watch another two or three (or more!) seasons about Angel, despite how dreadful Angel occasionally was, because I find him complicated and fascinating, whereas Buffy (though she does develop over the course of her series) always seems somewhat two-dimensional to me. I suppose this is a version of the age-old artistic problem that virtue is intrinsically less interesting than vice, except that of course with Angel we’ve got the best of both worlds: good and evil in unending tension, Angel and Angelus distinct but never entirely separable. Buffy, on the other hand, has a clear and singular role to play: while she sometimes rebels against it, when things turn bad she always, always, rises to the occasion — which is great and inspiring, because she’s strong and principled and brave and autonomous, but also somewhat predictable.

Angel is quite limited in Buffy, too: I was actually startled, in the early episodes of Angel, to see him laughing and talking and generally interacting with people, and with the world, like a real person, rather than just brooding in his crypt. (I’m not sure I ever saw Angel really smile in Buffy, never mind sing or dance — though I suppose that’s just as well.) I loved the way Angel made a running gag out of his broodiness, rather than romanticizing it,  and I appreciated that the other characters and also many of the plots that unfolded over the series challenged him to think about his life and choices in varied and often quite ethically complicated ways. His role as a “champion” is never as straightforward as Buffy’s, because he carries Angelus with him, with all the baggage of his past sins but also the lurking possibility of reverting to evil. In some ways I think that gives his moral choices more weight than Buffy’s can ever have, because she’s never actually going to do the wrong thing, and when Angel does the right thing (like destroying the Gem of Amara) it’s often at considerable cost to himself. 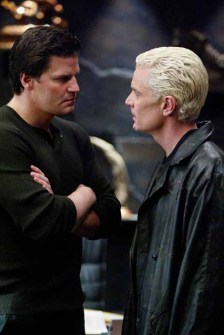 This is one reason I liked it so much when Spike joins Angel: their different paths to the same place become so mutually illuminating. Spike made a deliberate decision (and went to considerable pain and trouble) to get his soul back, and that heroic quest makes him more noble in some ways than Angel, whose transformation was involuntary. But Spike has nothing like Angel’s experience of repentance. As Spike eventually says to Angel, “I never looked back at the victims,” and in that respect Angel, who has suffered years of tormenting guilt and chosen over and over to seek redemption, has something of a moral lead. “I spent a hundred years trying to come to terms with infinite remorse,” Angel expostulates; “you spent three weeks moaning in a basement and then you were fine.” (Spike’s entrance into the show also, as that line shows, brought back the wonderfully comic quality that Season 4 is mostly missing, and that keeps the show from falling into self-importance. Here’s an entertaining compilation of some funny Angel-and-Spike moments. 🙂 )

I enjoyed the noir atmosphere of the earlier seasons, with its blend of superhero crime fighting and hard-boiled private eye investigations: it’s Batman meets Philip Marlowe. I can see, though, how that genre could lose momentum: while having a vampire as the investigator is initially a cool twist, it could easily have become just a gimmick. So it makes sense that they moved the show away from that episodic approach towards larger arcs in which Angel’s ongoing fight for redemption, and the overarching conflict between good and evil in the world, gave it purpose and depth. (This is how Buffy develops too, with the first season — as others warned me when I first started watching it — following pretty tedious “monster of the day” plots and then later seasons taking on more ambitious unifying themes and story lines.) I know that I’m not alone in feeling that in Angel the result can sometimes be terrible (did I mention that I don’t really want to watch Season 4 again?), but a show with a reach that exceeds its grasp is still preferable in lots of ways to one that doesn’t even try. And even the worst story lines in Angel sometimes yielded great moments. I hated everything about the way Jasmine came into the show, for instance — parts of that plot were truly abhorrent — but the episode in which she finally faces off against Angel was both dramatically satisfying and philosophically significant. 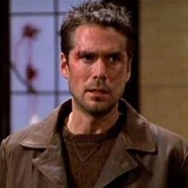 I didn’t like the Angel ensemble as much as the Scoobies in Buffy, but another thing Angel and Buffy have in common is that they both show individual characters transforming in ways that leave them astonishingly far from where they started but that somehow happen in utterly believable ways. Other long-running shows I’m familiar with put fairly consistent characters into lots of new situations, but what happens with Spike in Buffy happens with both Cordelia and Wesley in Angel. If you’d told me while I was watching Buffy that one day Wesley would make me cry, I would not have believed you! As for Cordelia, I couldn’t possibly do better than Jennifer Crusie at explaining how good her character becomes and how terribly she is ultimately treated. Kudos to the actors, of course, as much as the writers. As for our new friends, Gunn was good; I found Lorne a bit bland and Fred annoying ditsy — until she wasn’t any more. 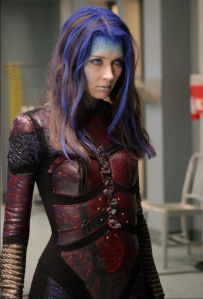 Since I’ve only seen them all once so far, I can’t really say much in detail about individual episodes, though there are a few that do already stand out in my mind, including “I Will Remember You,” “Epiphany,” “Reprise,” and “You’re Welcome.” (Oh, and “Smile Time,” of course — though I still haven’t decided if it’s awful or brilliant. Maybe it’s both? Ditto “The Girl in Question,” which was almost too hilarious.) I also thought the final episode of Season 5 was quite wonderful: each character chose to have a day that beautifully represented who they were. My favorite bit there was Spike reciting his poem: what a nice return to our love-lorn William. When the season, and the series, was over, I felt satisfied with the way it went out, but also bereft because now there’s nowhere new left for me to go in this imagined universe that, to my surprise, I have ended up enjoying so much.

After I finished watching Buffy I discovered this excellent series of episode guides, which includes a pretty smart one called “Why You should Watch Buffy the Vampire Slayer.” I knew from watching that video that if I watched the matching one about “Why You Should Watch Angel” I might inadvertently pick up some spoilers from the illustrative clips he uses, so I didn’t watch it until I’d seen the whole series. I’ve watched it now, and like the Buffy one, I think it makes a pretty good case, as well as offering some insights into the plots, characters, and themes of the show.

11 thoughts on “Slaying the Dragon: First Thoughts on Five Seasons of Angel”