The final exams for my classes were last Friday and Saturday, both at 8:30 a.m., both in Dalplex, our main athletics facility, which is converted during the exam period into, well, this: 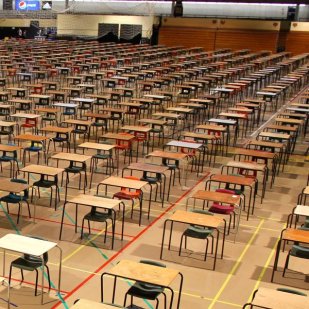 Looks depressing, doesn’t it? And it is, but it is also efficient: a cadre of assistant invigilators patrols the aisles, helping to bring extra exam booklets or escort students to the washroom, while an appointed Chief Invigilator works out the seating plan, makes announcements, and keeps track of the time. Though in some ways I prefer being in a smaller room alone with “my” students, the impersonality of this set-up is not all bad. And I always put out candy (toffees, this year), which I hope is at least very mildly cheering. (I was always too nervous to eat before exams, which meant my blood sugar would crash in the first half hour or so: a toffee or two would have really helped me out, which is why I do this. That, and because despite any rumors to the contrary, I’m a friendly person!)

Anyway, the consequence of having both exams back to back like this and quite late in the exam period is that I went from being completely caught up on work the previous Thursday night to having approximately 120 exams to mark. I decided not to start on them until Monday — I’m trying to reclaim my weekends, which is rarely possible during the term when you have a Monday morning class, but it seems like a good principle as far as work-life balance goes. So Monday morning I settled in, and Friday around mid-day I filed the second set of final grades.

It was not a pleasant week, and as usual it raised all kinds of questions for me about final exams. This is such familiar territory on this blog now that I’m reluctant to rehash the arguments for and against them. I wish I could do without them altogether, but experience teaches me that I can’t, at least not in classes that aren’t as self-selecting as 4th-year seminars (where I have never given exams). I’m almost as tired of fretting about exams as I am of marking them! The solution that seems most reasonable to me at this point — since the chief purpose of them in lower-level classes is to motivate work and attention during the term — is to change the kind of exams I give to make them less laborious for me to mark. I’ll be thinking more about that when I work out the assignment sequences for my next classes … which won’t be for months, because I’m on sabbatical as of the end of December!

Yes, that’s right, I have made it through to another teaching-free term. I was on sabbatical when I first started this blog, in 2007, then again in 2011. I got a lot done both times, but in somewhat miscellaneous ways. This time I am determined to be more deliberate about how I use my time, to get less distracted by small projects (essays and reviews that aren’t really part of anything, even if individually I’m proud of them). It has been very intellectually stimulating paying more attention to “that tempting range of relevancies called the universe,” but this sabbatical is about my “particular web” — which, yes, means that George Eliot book I keep talking about but not actually writing.

Actually, that’s not quite fair, since in the summer I wrote a kind of prospectus for the book — and since the five essays I’ve written on George Eliot (for Open Letters and the Los Angeles Review of Books) are all, in a way, trial runs at the kind of criticism I want the book to represent. That’s a long way from producing something longer and more unified, though, and I have been realizing how long it has been since I really thought on a larger scale than “essay” or “article.” I haven’t really worked at anything book-length since I turned my thesis into my first book; my second book was an edited collection, for which I did a great deal of work and wrote an introduction, but that’s not at all the same thing! The first challenges for me, then, are both conceptual and logistical. The prospectus really helped me with the former; now I have to face up to the latter by breaking down a large and still fairly vague plan into manageable first steps. And I have to make sure that I don’t let myself get too tempted away from this still frighteningly open-ended project to more concrete things I can finish up now. The short-term sense of accomplishment is like psychological toffee, really: you get a useful little sugar rush from it, but it won’t serve you well in the long term.

And that’s one reason I’m going to block off further thoughts, meditations, plans, and preparations for next fall’s classes. I love drafting syllabi! Choosing reading lists is fun! Even building Blackboard sites has its satisfactions, because it involves many discrete tasks that can be neatly itemized and checked off — but they really do not need to be done now. If you catch me working on them before July 1, when my sabbatical ends, rap my virtual knuckles, please! (Well, I will have to submit course descriptions and book orders in March or April, I think, but anything beyond that is not allowed!) I think this blog shows how seriously I take my teaching and how much time I put into it, but the point of a sabbatical is that you focus on the other things you’re supposed to be doing as a scholar.

Something I think may help me maintain a different kind of focus next term is spending less time in my office. We’ll see: it can be a very quiet, productive space for me. But it has been an emotionally very up-and-down term for me, especially where thinking about work is concerned, and there have also been a lot of specific work-related stresses. As a result, I’ve been feeling a strong desire to put a little distance between myself and the campus. I had been imagining I might take my laptop to our new library, which has finally opened to the public. But although it does seem to be a very exciting, vibrant space, my two visits so far have been discouraging about it as a potential workplace for me. We live close to the Atlantic School of Theology, which has a library with a pretty nice view; my guess is that it’s pretty quiet, so I might give it a try. Even just fixing on a different campus location for writing might be enough to break the mental cycle of weariness and discouragement.

The other thing I’m committed to is signing up for Jo VanEvery’s “Meeting With Your Writing” — for which, it occurs to me, I’d best be in my campus office, so I have a landline, but that’ll be fine for such a specific purpose.

So! That’s this term put to bed and next term planned out — in theory, at least. But now I’m taking a break to read, bake, and generally unwind and enjoy our quiet holiday traditions.Inspired by Howards End, I’m rereading A Room with a View, which I love as much as always; I’ve got a mental TBR list yards long; and I see several book-shaped parcels under the tree, which is always exciting. I’ll also be putting up a couple of year-end round-up posts here soon (here are last year’s).

4 thoughts on “Last Week In My Classes: Exams and What’s Next”