I complain a lot about living in Halifax, but when spring finally arrives out here, the city has some redeeming features. This bright, beautiful morning, I enjoyed one of my favourite Halifax things: a trip to the city’s Victorian Public Gardens.

First opened in 1867, the Public Gardens feature the most spectacular rhododendrons I’ve ever seen, as well as formal flowerbeds, a gazebo (with band concerts on Sunday afternoons), a large duck pond (with abundant ducks) and all manner of fountains and statues. It’s a green oasis in the middle of downtown: you can barely hear the hum of traffic, and as you stroll the well-kept walkways (no dogs, no joggers, and no bicycles allowed!), you can easily feel as if you have stepped back into a Victorian fantasyland.

There’s a Boer War memorial fountain, and a fountain commemorating Queen Victoria’s Diamond Jubilee. Even the swans are named ‘Horatio’ and ‘Nelson.’ 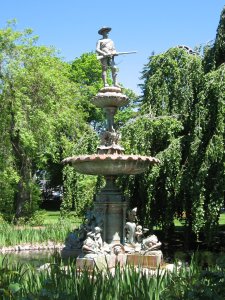 When Hurricane Juan struck Halifax in 2003, the Public Gardens were hit hard (though not with quite the devastating results seen at nearby Point Pleasant Park, which lost an estimated 70% of its trees). Since then, the Gardens have been beautifully restored. Here are a couple more pictures from today’s trip, including a shot of the bust of Walter Scott that used to be right outside the front gates (during the restoration, it was relocated to just across the street, near the statue of Robbie Burns–we’re not called New Scotland for nothing). 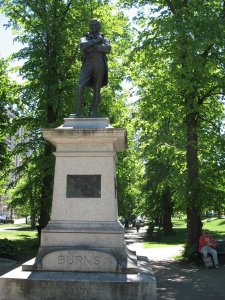 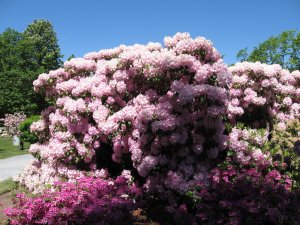