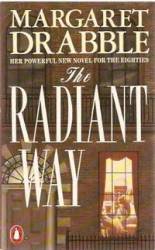 Margaret Drabble makes it pretty obvious that she intends The Radiant Way as a continuation of the 19th-century novel tradition. Like Jane Austen, she focuses on a few interconnected families whose personal lives are fodder for her wry wit and social satire, but The Radiant Way is also very much a social problem or ‘condition of England’ novel, full of details about the political and economic circumstances that shape and often distort its characters choices. Austen’s fiction is of course highly political, but most often in implicit or subtle ways. You never get passages like this one in an Austen novel:

On a more public level 1980 continues. The steel strike continues, a bitter prelude to the miners’ strike that will follow. Class rhetoric flourishes. Long-cherished notions of progress are inspected, exposed, left out to die in the cold. Survival of the fittest seems to be the new-old doctrine. Unemployment rises steadily, but the Tory Party is not yet often reminded of its election poster which portrayed a long dole queue with the slogan ‘Labour isn’t working.’ People have short memories, many of them are carried along with the new tide. They are fit. The less fit get less and less fit, and are washed up on the shore. 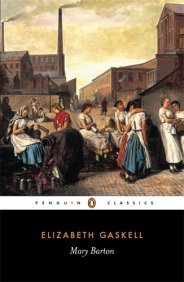 As this passage illustrates, The Radiant Way is about the condition of England in the 1980s, and its treatment of that era matches, rather than counters, what it suggests is the spirit of the age: it is (mostly) satirical, snide, cynical, bitter. I wonder if that is why it seemed to me so much more dated than, say, Mary Barton, with its heartfelt appeals to our common experiences and better natures. There is something naive, of course, about Gaskell’s novel, and many of her attitudes are outdated. Maybe I just prefer her kindness and optimism to Drabble’s somewhat ruthless explication of people’s weaknesses and compromises. The extent to which her analysis is still painfully current, too, shows that if anything she was prescient about the corrosion of the welfare state, the devaluation of art and education, and the instability of love as a foundation for happiness. Maybe I just wish it were dated. 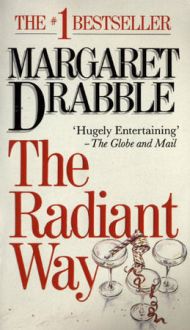 I read The Radiant Way for my book club (it’s our follow-up to The Group). I’ve read it once before, years ago, but I barely remembered it, and most of it felt quite unfamiliar to me this time. The one aspect that came rushing back to me as soon as it was mentioned was the bizarre subplot about the “Hampstead Horror.” Why should this novel feature a serial killer? The murder in Mary Barton is integral to its story about class conflict; its consequences and its resolution are both devices for addressing the underlying social and moral problems Gaskell suggests need fixing. I find it harder to reconcile the melodrama of the Hampstead Horror with the rest of Drabble’s novel, even though eventually it does become part of the main plot. What kind of device is it for her–what thematic purpose does it serve? I expect this is something we’ll discuss.

Overall I didn’t much enjoy The Radiant Way, but I did appreciate how wordy it is, and how crafty Drabble is with words. Her prose is dense but still very rhythmic; it is self-conscious and sometimes arch, but also kind of stabby, in a pleasurable way. She’s very good at families and their discontents; there’s a dinner scene in which the conversation is brilliantly awkward. What was missing, for me, are the qualities I like best in the tradition she is at once invoking and updating: warmth, kindness, pathos, good humor. In this respect it reminds me of David Lodge’s Nice Work, an even more explicit homage to the 19th-century condition of England novel that I also, on rereading, found clever but dated. For better and for worse, I find more of what I want in the earlier books…which I suppose explains why Victorian, not modern British, fiction is my area of specialization!

(The title of this post is a play on the title of the course I teach frequently on “The Nineteenth-Century British Novel from Austen to Dickens.”)