One of the things (OK, the many things) I can be persnickety about is what to call whatever it is that I write here when I write about books. I call the results “posts,” not “reviews,” not because I consider a book review a limited or limiting form (not by definition, anyway, though in practice published reviews are very often limited, in scope if in nothing else) but because when I’m writing what I think of as a review I feel  accountable, both to the book and to the implied audience. As a bare minimum, that accountability means reading every word in the book scrupulously, and then crafting a narrative about it that is very carefully considered. No review is authoritative in any absolute sense, of course, but when I’m wearing my Official Reviewer hat I aspire to a certain kind of confidence in my understanding of the book I’m writing about.  Here, in contrast, I can write whatever I want, no matter how inadequate my understanding might be. My blog posts are narratives of my own reading experience, and so I’m answerable only for being honest and thoughtful about that.

This is probably a lot of unnecessary fuss about terminology. I don’t disagree at all with Dorian that a review is really just any “reckoning with a text.” Yet, however irrationally, the label I use matters to me because giving myself permission to write has always been a challenge. I know it is for many academics, because we are trained to be pretty sure we know what we’re talking about before we say anything. Up to a point, or in the right context, this is as it should be, but it’s also really inhibiting–and contributes to the epidemic of imposter syndrome, I’m sure. Blogging has helped me get comfortable with writing that is exploratory, not necessarily assertive, and certainly not authoritative. Many of my favorite posts were written when I didn’t understand what I’d read or couldn’t make sense of a reading experience. I don’t have to work through those limitations before writing a blog post (something I would try to do before writing a review)–I can work through them in a blog post.

That’s an awfully long preamble to these remarks about Mary McCarthy’s The Group, which my book club met yesterday to discuss. As you might have predicted, I was putting off getting to the book until I’d said all that other stuff because I did not do a good job reading it, and as a result I wasn’t sure I should write about it. But then I remembered that I was blogging about it, not reviewing it, and so it’s okay for me to admit that and write about it anyway! If you want commentary by someone who is much better informed about The Group, I highly recommend this series of posts by Andrew Seal (a former Valve colleague of mine); I also really liked this article on McCarthy by B.D. McClay, which was actually one of the reasons I suggested The Group for my book club in the first place.

I didn’t hate The Group. Well, actually I did, at first: on Twitter I called it “nearly unreadable,” and that accurately describes how I felt about the first few chapters. It was a combination of the tone, the claustrophobic social setting, and the dense, unbroken paragraphs. Everybody I met in the novel seemed profoundly unpleasant; I thought I might be driven to complaining that nobody in the novel was “relatable” … the horror!

I never had a conversion moment, but I’m glad I persisted with my reading, not just because it meant I could show my face at my book club but also because the book did turn out to be better than my first impressions of it. My experience improved as I got more used to the style–but I also gave myself permission to skim some of the relentless cascade of details that made up so many of those dense paragraphs. I understand that this may seem precious coming from a Victorianist! I tried to put my finger on what made McCarthy’s exposition seem so long and unpleasant to me in spite of my love for long and excessively detailed 19th-century novels, and I think it’s the same thing that made me recoil from most of her characters: she treats everything, and everyone, so coldly. Ultimately a lot about The Group is very sad, in some cases even tragic, but the novel has none of the humanity, none of the compassion, that its own stories could reasonably summon up. The word ‘sociological’ came up a lot in our book club discussion, and by and large we’d all found her depiction of her women’s lives interesting. But there’s something clinical about each of the women’s stories, with McCarthy observing them shrewdly, scrupulously, often wittily, but never sympathetically. 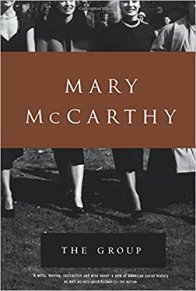 I’m not sure if I liked the second half of the book better than the first because I adjusted to (or compensated for) McCarthy’s prose or because I liked the later characters better. Libby’s story was the first one that really engaged me, for the not especially good reason that I’m interested in writing and publishing, and that whole world has a sordid kind of glamour to me as a result. At my book club we were unanimous in liking Polly’s story the best; her relationship with her father is perhaps the only tender one in The Group, and her marriage also seemed like a respite from the acidity of the novel’s other relationships. (I should say that overall everyone else was quite enthusiastic about the novel–listening to them explain why helped me appreciate it better.) Kay’s reappearance in her story in a very different situation made me rethink my earlier reactions to her and her marriage, and the novel’s ending also made me realize that I had missed something of the forest because I was focusing too hard on the individual trees.

So. This (therefore) will not have been a book review, but it is something of a reckoning with my experience of reading one particular, unexpectedly ornery book.