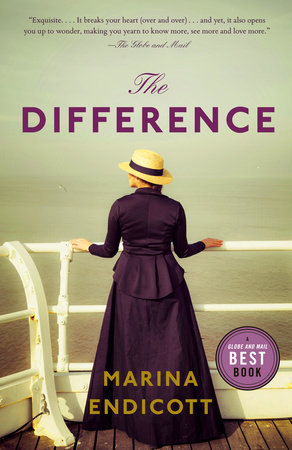 ‘Still, was it right, to take a child from his people?’

Thea shook her head and got up from the rocker. ‘You make me tired, Kay,’ she said. ‘You have a way of simplifying an argument that ignores the complexity of life.’

Marina Endicott’s The Difference was a near miss for me. It has a lot of elements and qualities that I usually enjoy, and that I mostly did enjoy in this case. It is meticulous historical fiction–though ‘meticulous’ is not my highest term of praise because it rightly implies that the novel made me a bit too aware of the care with which it renders its imagined version of a particular time and place. I prefer more exuberance, and The Difference as a whole only occasionally risks more expansive expressiveness.

When it does so, it is around the wonders of the sea and its creatures: it is very much a sea-faring novel, and while (again) this meant it was filled with good things, things I usually like (like vivid descriptions of water and light and dolphins, and plenty of neepery about sailing) often it felt to me as if we were proceeding at a speed a bit too close to real time on the Morning Light‘s voyage from Yarmouth to the South Pacific and around again. For over 250 pages (so, much more than half of the novel) The Difference seemed to be going nowhere in particular except on that literal voyage, which provides a deliberate, well-crafted, but rather protracted set-up for the problem that is supposedly the crux of the story and its themes.

The Difference tells the story of Kay, her half-sister Thea, and Thea’s husband Francis, the ship’s captain, as they travel the ocean on Francis’s trading route. Endicott’s account of both the trip and their many varied stops are full of fine detail and Kay is a well-developed character: young, thoughtful, unconventional (of course – she has to be, I guess, to be a protagonist), excited to be tutored in Greek.

Part of the backstory for both Kay and Thea is their father’s work at an “Indian” school, where conditions were harsh and the treatments punitive for the pupils who were taken away from their own families and cultures. It’s clear that Endicott means this large-scale wrong as a counterpoint to the specific wrong on which the book’s plot eventually pivots: about half way through the book, off the coast of a small island called Pulo Anna, the ship encounters boats full of men eager to trade – including, it turns out, one of their own number, a young boy whom they leave on the Morning Light in exchange for four pounds of tobacco. Thea, who has had multiple miscarriages, essentially adopts the boy, whom they call “Aren”; she delights in being his “mother,” and Kay embraces her role as his big sister. Aren adjusts with seeming ease to his new life but becomes ill with TB, and they end up stopping in New York so he can recover. 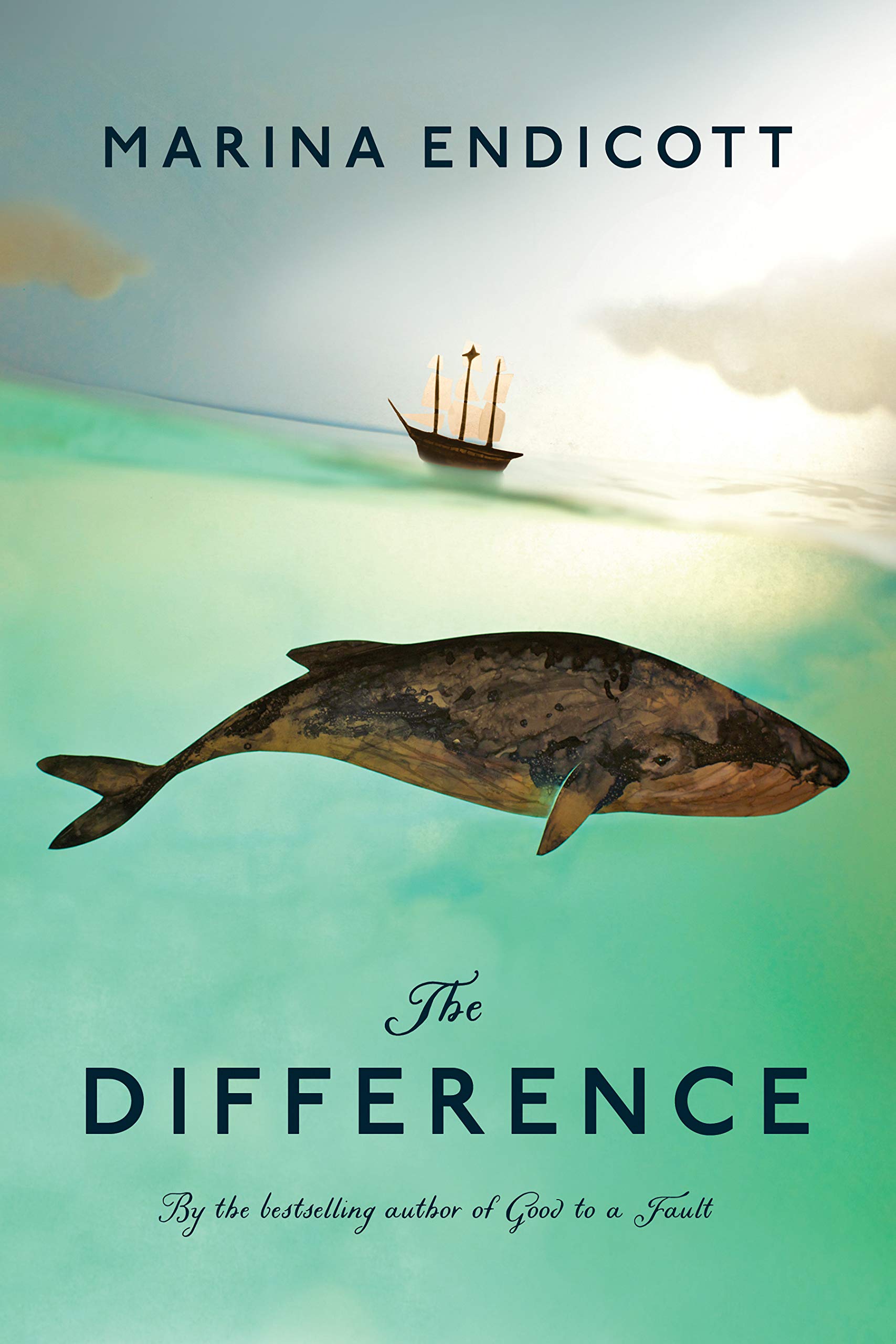 We pick up again about a decade later and much has changed. Most importantly, Aren has left his adopted family and is living a bit of a rough life in Halifax. Distressed and frustrated, both on his behalf and her own, Kay comes up with a plan to take him “home” to Pulo Anna. Once more we find ourselves on board ship and traveling across the seas. Although the next part of the book is as carefully and thoughtfully crafted as the first part, as I made my way through it, and even more so at the end of the novel, I found myself preoccupied with what Endicott had left out by not addressing the intervening years: a lot was missing, I thought, that would have illuminated both the action and, more importantly, the meaning, of the novel’s resolution.

The moral heart of the novel is the question of whether, as Kay very belatedly asks, it can have been right for them to take Aren away with them. Near the end of the novel, Thea reveals in a letter to Kay that when Aren was very sick, he yearned for his original family to “come to get me.” This is the first and almost the only explicit evidence we get that Aren did not in fact accept his new situation as placidly as it seemed, and while perhaps it should go without saying that his experience was traumatic, I can’t understand why that truth (assuming it is supposed to be the truth) was so completely suppressed in Endicott’s story-telling. Perhaps the point is to indict both Kay and Thea for taking his contentment for granted – an assumption as reductive to his humanity as the more overtly racist things people say to him or about him after he has joined their family – and thus to indict us by association if we haven’t questioned their points of view. Still, it seems odd to make the alternative perspective – a potential source of significant moral conflict – not just elusive but invisible almost to the very end.

It’s Kay who has the most chance to be a figure of resistance and an ally for Aren, as she is set up as a bit of a maverick or nonconformist from the start, but she doesn’t express any concerns until that late and quite muted confrontation with Thea, and her relationship with Aren is genuinely affectionate, and (as far as we are ever shown) mutually so. Only her tutor, Mr. Brimner, shows any shock at the crude transaction these kindly people have engaged in. “We’ll leave Thea to tell the tale of her purchase of this little fellow,” Francis says lightly, at which

Mr. Brimner’s eyes snapped up to Francis’s face, as if he checked for a jape or jollity, but he schooled his expression quickly to one of objective interest.

His reaction does cast a skeptical shadow over the family’s own account, which casts them as benevolent saviors (“One could not credit how desperate the people were,” Thea explains to Mr. Brimner), and perhaps that is supposed to be enough to drive a wedge between us and them, even though the novel proceeds to depict both them and Aren as carrying on quite happily together.

I wonder if Endicott decided not to show the actual years Aren spends with his adopted family (skipping ahead as she does to his eventual alienation and departure) because that actually avoids treating Kay’s question as one that presents a genuine moral problem. Is the idea that we should not even try to weigh the life he had against the life that, in some sense, he should have had, or that at any rate he would have had, if his brother (as it turns out) had not so cavalierly traded him for tobacco? If the question of whether he might not, by some measures, have benefited from the trade is simply inadmissible, than I can see that it would be wasted time, argumentatively at least, to lay out the results as if there is any value or meaning in doing so: as if the specifics of his experience of being raised as  part of Thea and Francis’s family could possibly make any difference to the absolute moral wrong of his having been take away in that way from his own home. (Does he consent? What would count as consent, for a child and in those circumstances? Would it matter if he did?)

Taking that initial trade as a kind of original sin, from which no good can come, there is a certain simplicity, rather than complexity, to the novel’s moral framework: no matter how kind you are or how good your intentions, you have no right (to answer Kay’s question) to take a child from “his people.” If that is the novel’s point, it approaches it quite circuitously and by omission, rather than inquiry or dramatic enactment. Why not more directly expose the inadequacy of Thea’s version of the story, for one thing? (“A benevolent God,” she thinks, “had given her the chance to save this one soul at least from poverty and starvation,” and she considers this repayment for, not duplication of, “the deaths of all those poor Blade Lake children.”) Why not show us, too, what exactly Aren gave up, what the loss is to him, which remains not just abstract but actually a bit hard to take for granted, because something else we learn on that final voyage is that “his people” have not survived: war and then famine have wiped them out. If he had never left, he would presumably have died with them; his body might well have been one of those found “littering” the beach. I guess what I missed as I finished the novel was clearer evidence of how (or, I guess, whether) the novel thought we should wrestle with these alternatives. Is the news of the island’s catastrophe actually evidence of complexity after all, because it is hard to say for sure whether Aren was, ultimately, better off for being spared this fate? Or, again, do the terms of his “adoption” make any further moral considerations moot as there’s nothing that can possibly compensate for or mitigate that harm?

Endicott’s acknowledgments suggest she intends the latter. The Difference was inspired by real events, and she says that she “heard Miss Ladd’s story of the boy bought for four pounds of tobacco with an instantaneous feeling of revulsion.” She also makes explicit the connection I alluded to between Aren’s story and “the terrible legacy of residential schools in Canada.” Kay and Thea both carry profound guilt with them for how their father’s pupils suffered; it is surprising that they do not more readily make this connection themselves, though Kay moves closer to it by the end. One of the reviews quoted on my edition of The Difference says that the novel shows “how many mistakes can lead to kindness.” To me, the thrust of the novel seems rather to be “how many intended kindnesses can lead to mistakes.” I just wish the novel had been more direct about both dramatizing and philosophizing about – making the arguments for – that theme.

8 thoughts on ““The Complexity of Life”: Marina Endicott, The Difference”