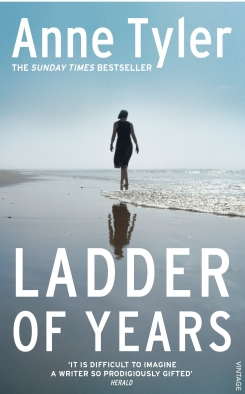 There was a hashtag going around on Twitter today for people sharing the titles of books they read over and over–#GroundHogDayBook, in honor, of course, of Groundhog Day. That’s a funny sort of meme for those of us who read professionally, since I reread as much as I read, maybe more. So it doesn’t seem quite right to point to Middlemarch or Jane Eyre or Great Expectations in response, even though I do reread them at least yearly, and love to do so. What about books I reread for no other reason than because I want to? As it happens, I’m rereading one of those today: Anne Tyler’s Ladder of Years.

What is it about Ladder of Years that I like so much? It is one of my longstanding comfort reads (along with Alison Lurie’s Foreign Affairs and Joanna Trollope’s A Village Affair). It’s not that it’s a mindlessly soothing book, or an altogether cheering book. It’s the story of a woman who has become somewhat disoriented in her own life. This is a familiar figure in Tyler’s novels–Back When We Were Grownups, for instance, opens with the beguiling line, “Once upon a time, there was a woman who discovered she had turned into the wrong person.” Who hasn’t felt that way occasionally? In Ladder of Years, Delia feels adrift in her family: she’s not sure her husband ever really loved her (in her darker moments, she suspects he chose her to be sure he’d get her father’s medical practice), her children are teenagers and older and have little time for her, and in general she feels hectored, ineffectual, and unappreciated. One day, on their family vacation, entirely without premeditation–barely even with conscious intent or agency–she walks away along the beach and doesn’t turn back. She gets a ride out of town and goes as far as the small community of Bay Borough, where she rents a room in a boarding house, gets a job, and starts a whole new life.

That’s probably a pretty common fantasy for anyone with a life that feels, as Delia’s does, cluttered rather than meaningful, busy but not fulfilling. It’s a quiet kind of mid-life crisis: an attempt to recapture some essential self, some connection to the world that isn’t overwhelmed by other people–by how they see you, what they want from you, what they say about you. For Delia, her resettlement is a purification: sitting in her barren rented room, she reflects with some satisfaction that she can “detect not the slightest hint that anybody lived here.” “I’m here,” she writes to her tactfully inquring mother-in-law, “because I just like the thought of beginning again from scratch.” Her new life is entirely uncluttered: no family, no friends, no emotional attachments.

But Tyler knows (and so does Delia, deep down) that it’s just a fantasy. Life disentangled is no life, really, and Tyler’s are novels of reconciliation, not alienation. Friends and feelings and connections accrete even around Delia’s stripped-down existence in Bay Borough. Reading Carson McCullers’s “A Tree, A Rock, A Cloud” right after accidentally adopting a cat, Delia realizes she has begun again on the sequence of loving: “First a time alone, then a casual acquaintance or two, then a small, undemanding animal. Delia wondered what came after that, and where it would end up.” We know it can only end up back in the life Delia really lives, but from her time alone and what follows from it, she gains the strength and clarity to return to it as herself–and to accept her own changing place in it, and on the ‘ladder of years.’

Much as I vicariously enjoy Delia’s escape and the cool, unsentimental way she sets about reinventing herself, it’s her return that makes the novel calming, something I turn to when I’m feeling fretful in my own life. We don’t really want to abandon the people we love, no matter how difficult or annoying or distracting they can be; without the elements we sometimes chafe against as complications or impositions, our lives would be thin and bare and joyless, like Delia’s spartan rented room. Delia tries to walk away, not just from her life, but from life itself. The novel unassumingly, with Tyler’s characteristic dry whimsy, returns her, and us, to where we belong.