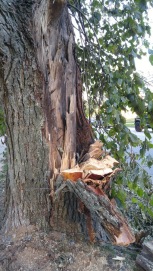 It hasn’t been stormy in my classes so far–in fact, we have barely had a chance to meet because of the literal storm that passed over Halifax this weekend. Hurricane Dorian churned up the east coast of the United States, and unlike most of the other big storms that head towards us it neither cooled off into an unpleasant but basically harmless rainstorm nor turned out to sea.

Dorian is the second hurricane to make a direct hit on Nova Scotia since we moved here: Hurricane Juan made landfall more squarely on Halifax itself in 2003. There has been much discussion about how the two storms compare. Certainly our personal experience is that Juan was more destructive in our immediate neighborhood: we live quite close to Point Pleasant Park, where 70% of the trees came down, turning what was once basically a forest into, well, not a forest! Juan also knocked down most of the lovely big trees that once lined our street: perhaps it pruned away the vulnerable ones, because although there were a lot of limbs strewn about after Dorian, things didn’t look that bad–until we walked a bit further and saw scenes like this: 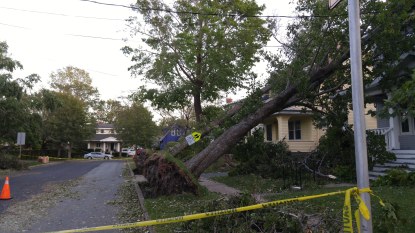 Other areas of the city saw much more damage, as did other parts of the province and the Maritimes more generally as Dorian crossed over Prince Edward Island and then finally left us alone. Piles of debris lined the streets I drove along to work, and looking down the side streets I could see that some of them are still in really bad shape. We were fortunate to lose power for only about 36 hours–enough to be inconvenient and (once it got dark) fairly boring, and actually longer than we lost it after Juan, but not in the end a crisis.

The clean-up and repair work continues around the city but in our lives things are getting back to normal. Dalhousie was closed Monday, so one of my own storm-related tasks was to figure out how to adjust my class schedules to take the cancellations into account. One advantage to losing a class early on is that you have lots of classes remaining to play with, but the down side is that in my first year class we hadn’t had a chance to develop a routine or build up any momentum yet, so it felt almost as if we were starting all over again this morning. Last week Pulp Fiction met just once as a whole class and then once in tutorials, so we’d barely introduced the basic concepts of the course. We covered more ground in Women & Detective Fiction, because in an upper-year course logistics are simpler and there’s no need for ‘intro to university’ stuff: in addition to setting up the basic framework for the course, I gave my one and only lecture for the term, as the course is otherwise a seminar, laying out a standard history of detective fiction along with some key points about its conventional forms and conventions are gendered, so that everyone in the class has a common set of contexts for the more specific readings and discussions to come. 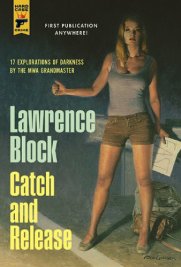 I decided to bump the scheduled classes along a day in Pulp Fiction and make up for it later, so today we picked up right where we left off last Wednesday, with the idea of “pulp fiction” and assumptions about differences between genre fiction and literary fiction. Then we turned to our first reading, Lawrence Block’s creepy little story “How Would You Like It?” It’s a story that doesn’t quite fit into any of the genres we’re actually studying–I suppose it is a kind of crime story, but it isn’t a detective story. It’s an attention-getting story, though, or at least I hope it is, and it’s useful for starting conversations about point of view, tone, and varieties of narrators, including unreliable ones. I wasn’t sure students would be willing to talk in class, given its relatively large size (120) and the rather formal lecture hall, but a lot of hands seemed to be going up, so I’m encouraged. I wonder if my using a microphone helps keep people involved because everyone can hear what’s happening: I am trying to be scrupulous about repeating students’ questions before I answer them, and also since it is wireless I can move around the room, including going up the stairs. 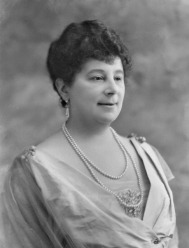 In Women & Detective Fiction, I decided we would stay on schedule: Monday’s class was supposed to be spent discussion a cluster of ‘classic’ detective stories to provide touchstones for our often subversive takes on classic tropes: I’d assigned “The Purloined Letter,” “A Scandal in Bohemia,” and Hammett’s “Death & Company,” one of his Continental Op stories. I think we can hit the main points about these quickly at the start of today’s class, and then return to them through comparisons with today’s assigned readings: Baroness Orczy’s “The Woman in the Big Hat” (one of her Lady Molly of Scotland Yard stories) and Susan Glaspell’s “A Jury of Her Peers.” Both of these stories begin our term’s work of highlighting the ways gender matters to fundamental questions in detective fiction, including who has the expertise and authority to solve the crime and what “justice” means in a context where women’s experiences in particular and a broader context of sexism mean that the law may not provide it.

So that’s what’s up this week! It was a somewhat turbulent start to the term but it’s not as if there’s anything I could have done about that, and things are settling down already. We’re also still in the deceptively calm period before much marking has to be done, so I’m not feeling overwhelmed … yet.

2 thoughts on “This Week In My Classes: Stormy Weather”