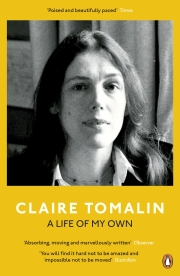 I don’t read a lot of memoirs, or a lot of biographies. The autobiography of renowned biographer Claire Tomalin, however, was so interesting that it made me think I should read more widely in both genres–starting, perhaps, with some of Tomalin’s own biographies, none of which I have read. Recommendations, anyone? I’m thinking perhaps The Invisible Woman, her book about Dickens and Nelly Ternan.

I did not initially find A Life of My Own that engaging. Tomalin’s account of her parents and her childhood was fine, but it seemed somewhat perfunctory, and in fact throughout the book, with rare exceptions, I was frustrated at the “one thing after another” minimalism of it: events unspooled steadily and were recounted without much commentary and in a consistently even (I might even call it flat) tone. This coolness was particularly jarring to me when Tomalin got to the details of her marriage to journalist Nick Tomalin. Nick was not always faithful, but he expected Claire to behave otherwise and reacted badly when he learned she had “embark[ed] on an affair”:

I was standing alone in the kitchen one evening when he came in and advanced angrily with clenched fists raised to punch me in the face. I ducked. His blow broke the wooden bar that held the roller towel on the larder door, where I was standing–I have kept it ever since as a reminder.

“After this,” she remarks laconically, “I had to expect violence from Nick when he was angry,” and a few pages later she recalls an occasion on which “he hit me so hard across the face with the back of his hand…that I needed stitches in my lip for the cut made by his heavy wedding ring.” Perhaps it’s unreasonable for me to expect these shocking details to sound more shocking in the telling, rather than quite so matter of fact. Claire and Nick did separate, but they also got back together eventually, and when she talks about his death (he was killed by a Syrian missile while on assignment in the Golan Heights in 1973) the good memories certainly seem to outweigh the bad for her: “Whatever the failings of both of us in our marriage, it felt now as if the sun had been eclipsed.” Relationships are complicated, and people’s choices often reflect those complications. Maybe Tomalin downplayed the violence (though obviously she did not omit it) because she had, much earlier, made the choice not to let it define their marriage.

Tomalin’s personal life was complicated in other ways too. She and Nick had four children. The youngest, Tom, was born with spina bifida. One of their daughters, Susanna, fell into a deep depression during her first year at college. “The transformation in her was unfathomable,” Tomalin writes:

The child who had amazed and delighted me for twenty years seemed as though she had been wrung out until almost nothing was left but a small husk of herself. Nothing in her life had prepared us for the change. Susanna had always delighted in the world and expressed her joy in every discovery she made, whether it was a new landscape or a new food, a freshly encountered poem or a painting. Now she seemed almost to have forgotten who she was or how to be.

None of the warnings I had been given were enough. Clearly she needed much more care than we were able to give her, and to be watched over in a way that I had not done, nor perhaps would I have been able to. Now I know we should have protected her fiercely, and that had we been given more and better advice, we might have saved her.

She writes at length about Susanna’s strength and beauty and pleasures, as if to counter the tragedy of her daughter’s death with the many other facets of her life: “She lit up our lives with her intelligence and generosity.” 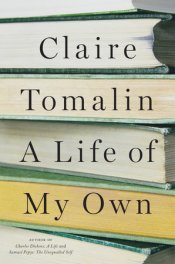 Tomalin’s personal life is only one aspect of A Life of My Own. Through it all she’s working, making her way through the literary world. Much of this material is, again, a somewhat perfunctory rehearsal of what happened when, with a lot of names dropped (which is totally fair, of course, since what’s she going to do, not mention the many famous writers who were in her orbit?). I was always glad when she let herself be a bit more expansive about her work as a writer and editor. About her aspirations as literary editor of the Sunday Times, for instance, she writes:

I knew that literary pages are supposed to make bestsellers, but I wanted mine to cut across the bestseller culture, to draw attention to the unexpectedly good, the unknown writer with something new to say, the odd, the difficult but worthwhile. And whatever passion was left in me, I was passionate about making our book pages the best in the business.

After she left the Sunday Times writing biographies became her main occupation. “Working on a biography,” she comments,

means you are obsessed with one person and one period for several years. Another life is bound up with yours and will remain so for the rest of your own life–that at least is my experience. You have gone in too deep to cast them aside. You will have looked into the context of their lives in every aspect, examined their family backgrounds, their beliefs, their tastes, their eccentricities, their friends and enemies, their ambitions, achievements and failures, their quirks and mysteries, their betrayals and unhappiness, their political allegiances, their medical histories, their finances, their children, their reputations both in life and posthumous. You will have been surprised by them, maybe disappointed, amused, amazed. Your interest is so strong it can be called a passion.

These were the parts of the book I liked the best: there is an energy to them that just seemed missing from the more straightforward autobiographical parts. I would have liked more sense of passion from her own story–I wonder if it comes through more strongly in her biographies of other people. It may also be that the book of hers I should actually follow up with is not The Invisible Woman or another biography but Several Strangers, which is a collection of her literary writing.

From a more personal standpoint, what resonated most with me in A Life of My Own is Tomalin’s comment about how late she actually began focusing on the biographical work for which she is now best known. “My story should be cheering,” she says, “to anyone who is finding it hard to establish a career they find congenial. . . . I was in my mid-fifties before I could concentrate on full-time research and writing.” Obviously she had a very significant career up to that point, and the experience and perhaps especially the connections she made working at the heart of London’s literary scene not only counted for a lot in themselves but meant she was exceptionally well positioned for a next phase that would probably be much more difficult for someone else. Still, it is indeed cheering, as I look towards my own “mid-fifties,” to think that what feels like a plateau might in its own way, for my own life, actually be a launching pad for some new work I have yet to do.

10 thoughts on “Claire Tomalin, A Life of My Own”