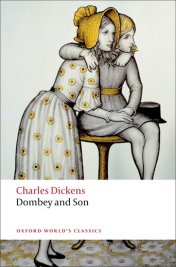 They had been married ten years, and until this present day on which Mr. Dombey sat jingling and jingling his heavy gold watch-chain in the great arm-chair by the side of the bed, had had no issue.

–To speak of; none worth mentioning. There had been a girl some six years before, and the child, who had stolen into the chamber unobserved, was now crouching timidly, in a corner whence she could see her mother’s face. But what was a girl to Dombey and Son! In the capital of the House’s name and dignity, such a child was merely a piece of base coin that couldn’t be invested–a bad Boy–nothing more.

I have finished making my way through Dombey and Son. I admit, it was a bit of a struggle at times–not (or not just) because it is, indeed, very long, but because I read it cold, without critical preparation. This is my preference for most books on a first read, so that I avoid carrying someone else’s interpretation with me, but it is also a calculated risk because interpretive expectations provide guidance and filters. For Dombey and Son, which is diffuse and stuffed full of characters whose purpose or importance is often not clear at first meeting, I think a bit of preparation would have helped me, even if it might also have spoiled some of the effects. My experience with the novel actually reassured me, in fact, that my own pedagogical approach to door stoppers of this kind is probably about right: I do my best to set up patterns and themes for my students to follow, so that they can sort and focus, but I also try not to give the game away, so that they can still enjoy figuring things out and also being surprised by what happens next. 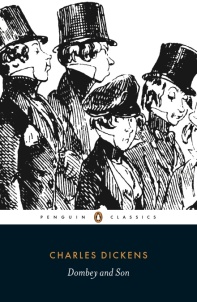 That said, I think that if Dombey and Son were a better novel, I might have been fine on my own and not fallen, as I sadly did, into occasional fits of boredom, impatience, or irritation. Though obviously a first read is almost by definition an imperfect one, some books nonetheless make their greatness clear pretty promptly, and I didn’t think Dombey and Son ever did. It lacks the joyousness of David Copperfield: its children have all the pathos and none of the fun, its villains are more cardboard, its eccentrics are less quirky and more repetitive, its heroes and especially its  heroine are much duller (imagine, a heroine who makes Agnes look subtle and complicated!). Though there is something impressive in the portrait of Mr. Dombey and the destructive vortex of his pride, Dickens does not take that critique and radiate it outward with anything like the breathtaking audacity of Bleak House, with its many variations on its central themes. The fairy tale quality of Florence’s story, with its long emotional exile as she is, so paradoxically, held captive by her father’s neglect, loses a lot of its impact as it drags on with its one repetitive idea: Louisa Gradgrind’s story has some of the same qualities but is so much more intense, and also so much more interesting because, unlike Florence, Louisa is capable of anger.

Edith, on the other hand, seemed to me a worthy cousin of both Louisa and Lady Dedlock: she sees who she has been made into and by what and for whom, and her furious rejection of it all gave the book some welcome drama. The high register of her part seemed almost incongruous, given how much of the rest of the novel consists of moping of one kind or another, but in her carefully cultivated value as a material acquisition she functions as a good foil to Florence, whose true value her father only very belatedly is able to acknowledge. Still, their actual relationship did not reverberate thematically the way Esther’s and Lady Dedlock’s does in their novel. Similarly, Walter and Florence’s romance was sweet, if painfully obvious, but didn’t seem to mean much. The business aspect and especially the recurrent emphasis on modernization was interesting, but Little Dorrit seems to me to do more thought-provoking things with commerce and innovation. 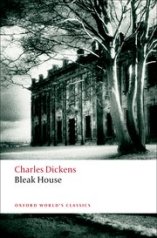 And so it went for me, really, throughout Dombey and Son: it kept reminding me of other Dickens novels but the comparison was never in its favor. I flagged a lot of bits I liked, and over its 900+ pages there were certainly moments I found sad or funny or even great in that way that only Dickens can be great. I was pretty fond of Captain Cuttle by the end! But at the same time, overall it felt cluttered and it took (yes) a bit too long to get us to the one result that really mattered, namely Mr. Dombey’s realization that his daughter was always already the child he needed. In Novels of the Eighteen-Forties Kathleen Tillotson notes that “Dombey and Son stands out from among Dickens’s novels as the earliest example of responsible and successful planning; it has unity not only of action, but of design and feeling.” I suppose, then, that you could consider it practice for the masterpieces that would follow, a lesser but valuable trial run. I can’t imagine choosing it as a teaching text over any of the ones I usually assign.