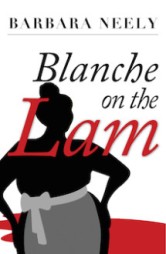 Men like Nate and women like her were the people, the folks, the mud from which the rest were made. It was their hands and blood and sweat that had built everything, from the North Carolina governor’s mansion to the first stoplight. They ought to have been appreciated for being the wattle that held the walls together. Instead, they were expendable, interchangeable, rarely missed, hardly regarded, easily forgotten. Not this time!

Barbara Neely’s Blanche on the Lam (first published in 1992) is the first of four novels she wrote featuring Blanche White, professional cleaning woman and amateur detective. The series was out of print the last time I taught ‘Women and Detective Fiction’ so although I was aware of its significance in the history of African American crime writing, I didn’t pursue it very far. Now that the books are available again, I thought I should check it out, and I’m glad I did: I think (logistics permitting) I will put Blanche on the Lam on the syllabus. It’s a brisk, entertaining read that is also sharp and self-conscious about the difference race makes to all aspects of the mystery genre, from the literal risks to black Americans in any kind of encounter with the police, to more abstract thematic questions about authority, evidence, and justice.

Blanche begins the novel in trouble for passing bad checks; the judge doesn’t care that she would have been able to cover them if her (white) employers hadn’t gone out of town without paying her on time. Right away, then, both race and class are highlighted. Amidst a disruption at the courthouse, Blanche escapes from custody, and then she takes advantage of the fact that “women like her” are indistinguishable to the wealthy white families they work for to slip into a housekeeping job that takes her–safely, she thinks–out of town for a while. It turns out, however, that she’s traveling right into more trouble, and eventually into real danger. From the start she doesn’t trust her employers, Grace and Everett, especially Everett:

He was a rich white male. Being in possession of that particular set of characteristics meant a person could do pretty much anything he wanted to do, to pretty much anybody he chose–like an untrained dog chewing and shitting all over the place. Blanche was sure having all that power made many men crazy.

As Blanche tries to figure out what is going on with these two, and with drunken Aunt Emmeline, who is confined to her upstairs bedroom, she learns more about the family from their long-time retainer Nate, who tells her stories about, among other things, how as a child Grace saved him from a roving band of KKK thugs. Although she’s upset at the first suspicious death in the novel, it’s Nate’s subsequent death that makes her particularly determined to bring the murderer to account.

Blanche also befriends and bonds with Grace’s cousin Mumsfield, a young man with Down Syndrome. I expect that his characterization and role will provoke some discussion. For Blanche, the key to their relationship is that neither of them is regarded as fully human by Grace and Everett–or, really, any of the white adults in the story. “She understood,” she thinks, that his condition

made him as recognizably different from the people who ran and owned the world as she. It was this similarity that made him visible to her inner eye and eligible for her concern.

Crucially, in terms of the unfolding mystery, nobody really listens to Mumsfield, and Blanche eventually realizes that she too has not really been paying attention to him even though he has been dropping clues for some time–without himself quite understanding what has actually happened. Blanche feels affection for him and protective of him, but she also wonders how far her identification with him can really go: “For all his specialness and their seeming connectedness, Mumsfield was still a white man.” She is wary of accepting a “mammy” role, serving as a caretaker for someone “whose ancestors had most likely bought and sold her ancestors as though they were shoes or machines.”

I already see a number of ways Blanche on the Lam will connect with–and make us look differently at–other books we’ll probably be reading. For instance, Blanche’s work as a detective has some interesting continuities with Miss Marple, who in her investigations relies on the ways people underestimate her, and on the invisibility that comes with her age. In a similar way, Blanche takes advantage of the access she gets to people’s private spaces and conversations because her race and role in the household make her unimportant to them. Being seen as “the help” is a specific kind of anonymity, insulting to her personally but also a tool she can use, as is the cheerful subservience she puts on as a mask when dealing with racism and snobbery. They both also know their way around a kitchen, and in both cases this “feminine” domesticity can be useful, though at the same time there are important differences in the ways that it defines their identities. The novel is told in close third person: I think it might have been even better in first person, but we get a lot of Blanche’s inner commentary on people and events and her voice still comes across very clearly. Although in this novel they are of necessity at a distance, because she’s in hiding, Blanche’s family and close friends are also important in establishing her character, and another point of connection to Miss Marple is the extent to which “gossip” or intimate storytelling among women is a vital element of the case.

Like other crime writers who emphasize social justice (such as, in this course, Sara Paretsky) Neely is also clear that the resolution of the specific case has done little if anything to fix the larger problems it has highlighted. At the end of the novel Blanche is moving from North Carolina to Boston, but not with any hope that it will be a safe space for her. “It seemed,” she reflects, “that enemy territory was all there was in this country for someone who looked like her.” The satisfaction she finds is individual, not systemic. “She would always be a woman who’d come too close to murder,” she thinks, but

she would also always be a woman who’d fought for her life and won. That woman, no matter how much she’d changed, was still capable of negotiating enemy territory–even without a reference from her most recent employer.

5 thoughts on ““Not This Time!”: Barbara Neely, Blanche on the Lam”