There was, of course, her diary. For two days after Cliffie’s mishap, and Bobby Kennedy’s death, Edith felt quite unsure of herself, unsure of the rails on which she moved–giving George his meals and taking sheets to the launderette and all that. So she wrote at greater length, voluptuously and voluminously, but still carefully in her big diary.

Edith’s Diary is not a very good novel. It pains me to say this, because right there on the cover is a blurb from the TLS declaring it “a masterpiece,” and if you can’t trust the TLS, really, who can you trust? 😉 It’s not terrible–in fact, considering how plodding the writing is and how painfully slowly it moves, it’s pretty readable. But the writing is plodding, very little happens but at great length, and many of the details seem strangely random, such as the incident (if you can call it that) when the protagonist Edith’s wastrel son Cliffie comes home when she’s listening to Fauré’s Requiem and she turns it off because Cliffie’s presence spoils the experience for her. That could have been a telling moment if it had been prepared for, but its extreme specificity seemed pointless to me. There’s also a lot of political discussion that contributed (I suppose) to Edith’s characterization but seemed disproportionate.

The novel’s premise is a pretty good one, though. Edith is an extremely ordinary woman living an extremely ordinary life. The one oddity of it is Cliffie, who is lazy, self-centered, and mildly sociopathic. One reason the novel kept my interest is that I kept waiting for Cliffie to blossom into a full-fledged evil-doer–but he stays just this side of true villainy. As a child he is trouble; as an adult, he is creepy. Fairly early in the novel Edith’s husband Brett leaves her for his secretary; Edith is left to cope alone with Cliffie and with Brett’s aged Uncle George, who spends the rest of the novel getting gradually more decrepit and demanding. 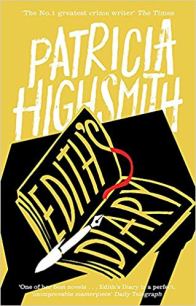 Edith’s real life gets more and more disappointing, but the life she “records” in her diary is quite different: there, Cliffie gets accepted to Princeton instead of cheating on his admissions tests; he marries, has children, travels, and excels professionally, instead of hanging around home moping, drinking, harassing Uncle George, and getting in trouble. “Splendid day,” Edith writes; “Long letter from Cliffie. . . . D. [Cliffie’s imaginary wife] phoned. She considers going out to join C. when the baby is a few months older. I really think she should.” It is sad as well as deranged: Edith’s reality is not great, after all, and the novel’s one strength is how subtly Highsmith has Edith’s grasp on it deteriorate (at one point she almost says something to the real Cliffie about the family she has concocted for him). Here too there is some suspense: as Edith’s friends and family start to worry about her, trying to get her to acknowledge that all is not well, it seems all too possible that the fissure between truth and lies will lead to some dramatic crisis.

It doesn’t, though: like Cliffie’s rotten character, Edith’s fantasy life never quite becomes anything: the reckoning, when it comes, fizzles out in anticlimax. Maybe that’s the point of the novel: maybe it’s best read as realism about the dreary horrors that lie behind seemingly ordinary lives and I was misreading its signals because it is by Highsmith and so I expected something different, something more sly and dangerous. Edith’s Diary, it turns out, is not a psychological thriller; it belongs with other period pieces about women’s domestic discontents. But I don’t think it’s a very good example of this kind either. I’d never heard of it before I happened upon it in the bookstore. It’s exciting to “discover” a lesser-known title, and we like to think the filtering process for literary fame is arbitrary, but sometimes the truth is that books are obscure for a reason.

4 thoughts on ““Unsure of the Rails”: Patricia Highsmith, Edith’s Diary”