Seating himself in the long chair, his thin hands gripping the arms, he seemed to relax watchfulness. Tired, I thought, and noticed the hint of purple in the shadows of the deep-set eyes, the tension of flesh across narrow cheekbones. Then, quickly, hailing into my mind the scarlet caution signal, I banished quick and foolish tenderness. Dolls and dames, I said to myself; we’re all dolls and dames to him.

I learned from A. B. Emrys’s afterword to the Feminist Press edition of Laura that Vera Caspary deliberately applied “the Wilkie Collins” method to her novel: her use of multiple narrators was inspired by The Woman in White in particular (although elsewhere Emrys makes the case that The Moonstone was also an influence), and her “fastidious, fascinating, and fat villain” is based at least in part on Count Fosco. Knowing this doesn’t make Laura better or more fun to read, of course: it just confirms that my taste is consistent, because I love The Woman in White and I also loved Laura.

I read Laura sort of in case it was a good fit for Women and Detective Fiction but more because I would like to switch out The Maltese Falcon in Pulp Fiction. I had resolved to assign In a Lonely Place, but when I started rereading it and was reminded just what a creepy experience it is to be immersed in the point of view of a serial rapist and murderer, I reconsidered: that’s a lot to put on first-year students, and after all, I wasn’t entirely convinced myself when I read it before that it succeeds in exposing misogyny rather than wallowing in it. At this point I am thinking of putting Hughes’s novel on the syllabus for Women and Detective Fiction, which is a 4th-year seminar populated by students who I think will be better prepared to have that interpretive debate themselves. Laura, however, just might do for Pulp Fiction–though I have yet to find out if our bookstore can get it in sufficient quantities (all of our first-year classes next year are capped at 120, which I find both distressing and daunting). 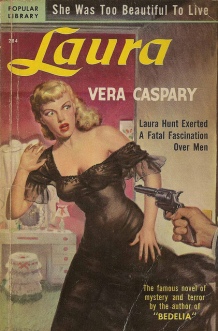 Laura would pose some pedagogical problems of its own, not because it’s creepy (though it is deliciously twisty) but because its first narrator, Waldo Lydecker, is completely insufferable. I actually didn’t know when I began the novel that it would have multiple narrators and I wasn’t sure I was up for 200 pages of his self-conscious pomposity. “I am given,” he tells us,

to thinking of myself in the third person. Many a time, when I have suffered some clumsy misadventure, I am saved from remorse by the substitution for unsavory memory of another captivating installment in The Life and Times of Waldo Lydecker. Rare are the nights when I fail to lull myself to sleep without the sedative of some such heroic statement as “Waldo Lydecker stood, untroubled, at the edge of a cliff beneath which ten thousand angry lions roared.”

Will the students be able to find him funny as well as pathetic and irritating? Of course, once Laura’s story has fully unfolded there are also plenty of clues to the mystery in the way he talks: the trick of teaching the novel, as with teaching The Moonstone (which, after all, opens with a couple hundred pages of Betteredge being stuffy), would be to make sure we have prepared for it by talking about dramatic monologues and the ways people reveal themselves through their language. If, as I am currently contemplating, we read True Grit rather than Valdez Is Coming as our sample Western, we will have practiced that at length with Mattie.

In addition to the clever plot and the pleasures of the multiple narrators, Laura seems to me particularly interesting for (no surprise!) Laura herself, and for the way the other characters attempt to fix her identity in a way that accords with their assumptions about women. Hard-boiled or noir fiction famously tends to limit women to specific roles: victim, dame, femme fatale. Caspary and Laura are both aware of the way women get cast into roles that restrict their individuality and define them in relation to men; Laura’s resistance to this is one of the factors that puts her life in danger. “You are not dead,” another character says to her at one point; “you are a violent, living, bloodthirsty woman.” How much of that sentence is true? It depends, quite literally, on whose story you accept.

Laura is also self-conscious about the conventions of detective novels. Waldo hates them:

I still consider the conventional mystery story an excess of sound and fury, signifying, far worse than nothing, a barbaric need for violence and revenge in that timid horde known as the reading public. The literature of murder investigation bores me as profoundly as its practice irritated Mark McPherson [Laura‘s detective].

“I offer the narrative,” he goes on, “not so much as a detective yarn as a love story”–another clue, though we might think, by the time we finish Laura, that he draws too fine a distinction–and that Caspary is nudging us to think about the ways stories of “violence and revenge” are usually gendered. “In detective stories,” Laura herself remarks, “there are two kinds [of detectives],

the hardboiled ones who are always drunk and talk out of the corners of their mouths and do it all by instinct; and the cold, dry, scientific kind who split hairs under a microscope. . . . Detectives aren’t heroes to me, they’re detestable.

Is Mark McPherson the hero of Laura? Again, it depends on which version of the story you accept, or on what you think actually does constitute heroism.

There’s a lot going on in Laura that I think would be fun and productive to work through. It certainly has as much literary flair as anything I’ve read by Hammett or Chandler, and it pulls off its tricks without glamorizing violence (as Hammett especially often seems to) and with a woman at its center who is herself, not just an object for male fantasy. I think it’s the first noir novel (Emrys calls it “new woman noir”) I’ve ever straight up enjoyed reading. Cross your fingers that it turns out to be an option for my class!