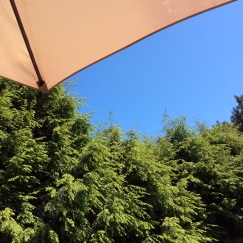 Here in Halifax we have been socked in with fog and cloud a lot lately, and the last two days in particular have been relentlessly overcast and muggy. The humidity alone is demoralizing, and the absence of sunlight just compounds the gloom. Happily we’re supposed to see at least some sun later today–but most of the rest of the week is forecast to be pretty grey. This kind of disappointing weather is typical of May and June here, but by July we’re usually enjoying a bit more brightness! As our long-awaited and always too-brief summer slips away, it’s hard not to feel a bit depressed, especially as constant construction noise in our usually tranquil neighborhood has made even the few really nice sunny days harder to enjoy. I have hardly spent any time reading on the deck, which is the one summer activity I really look forward to!

My mopey mood has not been helped by the constant barrage of bad news, or by the ceaseless cascade of angry responses to one thing after another on social media. My twitter feed yesterday was heavily dominated, for example, by people being angry about a terrible “take” on libraries and an ill-conceived hit job on Wuthering Heights. I didn’t disagree with (most of) the complaints: I love libraries as much as the next person in my feed, and though Wuthering Heights is hardly my favorite novel either, if for some reason I felt like making a big public statement about that, I would at least try to explain myself without insulting either the book or those who admire it–and I would certainly make a good faith effort to know the novel better and acknowledge its strengths as part of the project. But eventually I had to wonder who these declarations were really aimed at, since the pieces’ authors are almost certainly not going to see or be persuaded by them. I know it feels good to vent, and we all (myself certainly included!) use Twitter for this some of the time, but after a while the anger seems largely performative, and I’m increasingly inclined to see the compulsion to join the chorus of outrage as a problem in itself, not any kind of solution–though, having said that, I do realize that there can be both comfort and political value in asserting solidarity with other like-minded people. My least favorite genre of tweet is “you’re doing Twitter wrong,” so what I need to do is keep working on managing my own experience of Twitter–which I still find a vital lifeline to relationships and conversations and ideas I value–so that it is on balance more engaging than stressful.

On the bright side, I just finished reading a pretty good book, Sarah Moss’s Names for the Sea, which I will write a bit more about here soon. I also really liked Kathy Page’s Dear Evelyn, which I just finished writing up for Quill & Quire, and now I’m focusing on a short essay on Carol Shields’ Unless, a novel that has come to be one of my very favorites. I also feel good about my piece on “Reading Trollope in the Age of Trump,” which ran last week on the TLS Online–it was a treat to be writing about a Victorian novel again, and it was an interesting challenge to see if I could highlight its contemporary relevance while still mostly focusing on its particulars, keeping it “more Trollope than Trump,” as my editor and I agreed. It was also nice not to be behind their paywall for once!

I’m sure I will perk up soon. The sun is already trying to burn its way through today’s fog, and in the meantime I have plenty to do. Days–and moods–like this, though, which are pretty common for me in the summer, are why I don’t 100% look forward to this season, and why I kind of hate the well-intentioned “how’s your summer going?” questions from the few people I run into, most of whom really only want or expect me to say “fine.”