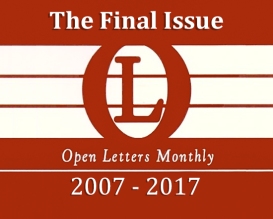 I have often but not always marked the occasion of a new issue of Open Letters Monthly here. The thing about publishing on the first of every month, regular as clockwork, is that it seemed predictable enough that people who cared shouldn’t have any trouble remembering the schedule and finding the new issues on their own! I feel as if I should not let the December 2017 issue go by without acknowledging it, however, because as some of you already know from our announcements on Facebook and Twitter, it will be the last one.

We’ve made our official statement about this on the site itself, and I’m not going to say more here about the collective discussion that brought us to this point. Speaking just personally, I feel a potent mixture of regret and relief. Open Letters Monthly is pretty venerable in internet years–it was founded in 2007–and has had a very good run. Indeed, I think it’s fair to say that at its best Open Letters Monthly was as good as any literary journal you’ll ever read, and I will always be very proud to have been part of it. It has also always been a lot of work, all of it challenging and most but not all of it rewarding. Though I feel ready to move on from it, I also know that I have OLM to thank for where I am now as a writer and critic, and thus for the new opportunities I hope to keep reaching for. I learned an enormous amount from my co-editors and from our contributors–about writing and editing above all, from the intense hands-on experience, but also about books and criticism, and about literary culture more generally and how I would like to participate in it.

For our final issue, we opted to highlight some of our favorites of the many essays and reviews we have both written and edited over the past decade. The result is a sampling that I think truly epitomizes what we always hoped Open Letters would be: a place that showcases smart, engaged writing on a wide range of topics, writing that is detailed and probing but also has plenty of personality. It is our plan to keep Open Letters available in its entirety so that people can still browse and enjoy its rich archive. We will all also still be reading, writing, and talking about books in a range of venues, so keep your eyes open for us!

On that note, I should add that I have no plans to give up Novel Readings, which actually predates my own association with Open Letters Monthly by a couple of years. I moved the blog from its original location to the OLM site in 2010. I always find change difficult, and I remember very clearly how anxious I felt when I made that decision. I feel a bit anxious now too, but as we all know, change is the only real constant! So as OLM winds down, so too will new posting at the OLM address, and this will become the only current home for Novel Readings.

2 thoughts on “A New (and Final) Open Letters Monthly”