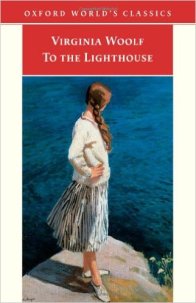 I’m reading To the Lighthouse for the first time. I know, I know. I also know that I should love it, because it is beautiful and moving and brilliant and original — and I sort of do, so far, except when I don’t. I am not a particularly good reader of Woolf’s fiction: it was only a few years ago that I finally read Mrs Dalloway, and I “succeeded” in that only when I stopped working so hard and let myself “fall under the spell of the language, which is beautiful and languorous but shot through with moments of startling clarity and, sometimes, brutality,” as I said at the time. The same is true of the language of To the Lighthouse, though at this point in my reading it’s that very languorous beauty that’s interfering, perhaps paradoxically, with my pleasure in the novel. It is making me impatient, faintly fretful, with its self-conscious artistry. The novel is not opaque, the way late Henry James novels are, but for all its meticulous attention to the mundane, such that everything everyday becomes somehow transcendent, it feels strangely detached from the reality it explores with such nuance.

These are just early impressions, and of a first reading, at that — and I’m also not finished the novel. So don’t think the worst of me! I will learn more as I read on, and more still as I reflect and reread. It’s a good thing, really, to read a novel that doesn’t fit easily into the grooves of my mind. It’s good for my mind, I mean. Already, To the Lighthouse has me thinking — not just about what I want from my reading and why, but about fiction and realism, about mothers and children, about husbands and wives, about lighthouses visited and not, literal as well as metaphorical.

The part I’ve liked least so far is Part II, “Time Passes.” But even though I found it excessively mannered, with its calculated parentheticals, it does wonderfully evoke both the long sweep of time and specific moments and details of change that seize our particular attention:

The house was left; the house was deserted. It was left like a shell on a sand-hill to fill with dry salt grains now that life had left it. The long night seemed to have set in; the trifling airs, nibbling, the clammy breaths, fumbling, seemed to have triumphed. The saucepan had rusted and the mat decayed. Toads had nosed their way in. Idly, aimlessly, the swaying shawl swung to and fro. A thistle thrust itself between the tiles in the larder. The swallows nested in the drawing-room; the floor was strewn with straw; the plaster fell in shovelfuls; rafters were laid bare; rats carried off this and that to gnaw behind the wainscots.

“Time passes.” It’s such a neutral-sounding phrase, almost like a stage direction, one that requires all the director’s ingenuity to show us its truth without taking us through the whole chronology. It’s an obvious truth, one we’re all perfectly well aware of, but we feel it deeply only during what George Eliot calls “one of those rare moments of experience when we feel the truth of a commonplace,”

The immediate context of that quotation is Mr Casaubon’s confrontation with the reality of death in the great 42nd chapter of Middlemarch, but that isn’t all that different, when you think about it, from our confrontation with the reality that time passes. You can’t stop it. It’s inexorable! It stops, for each of us, only with death, which is thus rightly pervasive in the “Time Passes” section of To the Lighthouse.

Funny little things can really bring home the reality that time passes. I don’t mean just obvious chronological markers like birthdays. They do remind us, but they don’t surprise us: they just keep coming round again on their predictable dates. I’m thinking more about things like my embroidered series of Henry VIII and his wives. And if that seems like an unlikely connection, that’s exactly my point: when it occurred to me that it might be nice to do some work on these cross-stitched portraits again, I didn’t expect to end up contemplating either the relentless passage of time or my own mortality, but that’s what happened. 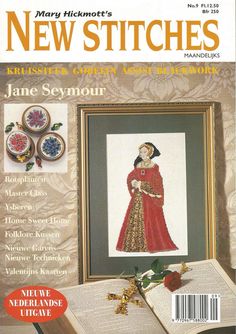 You see, I’ve been working on these off and on since 1993. I was newly married then and still not quite accustomed to the amount of golf my husband likes to watch on TV every weekend. Since it was hard to get away from the TV in our small apartment, and it didn’t seem very friendly (or very practical) to absent myself from home altogether, I decided to take up some hobbies that would keep my hands busy and give me a sense of accomplishment while I watched golf with him. A long-time reader of Tudor fiction, I was also working on a dissertation about Victorian historical writing, including Agnes Strickland’s Lives of the Queens of England— one way or another, Henry VIII and his wives had been in my life a long time. My thesis also included a chapter on the symbolic significance of needlework in Victorian historiography! So I was pretty excited when I chanced on a pattern in New Stitches magazine for Katherine Howard (wife #5, beheaded, in case you can’t keep them all straight). and even more excited when I realized it was part of a series and I could order the back issues, which I did. Over the next few years I completed four of the queens (Katherine Howard, Anne of Cleves, Katherine of Aragon, and Anne Boleyn). Just two wives were left, plus Henry himself.

After we had children, though, I found it almost impossible to work on these patterns, which are quite fussy and require both close attention and a minimum of interruptions if you’re not going to lose your place. Also, embroidering on white fabric means keeping your work area, your hands, and anything that might touch the work very clean: you can’t just put your hoop down any old place and grab it up again when you’re back. Even when it started to seem possible in theory to go back to these patterns in the evenings, I discovered that multi-tasking at the necessary level had become much harder: keeping track of the pattern and of the plot in a gripping HBO drama, for instance, was too much for me. The long and short of it is that poor Katherine Parr has been malingering in the drawer, barely half-finished, for years now.

What inspired me to take her out? Mostly that I’ve been experimenting with audio books for a while and though I do enjoy coloring as I listen, I thought I might get more satisfaction out of doing something with more tangible results, and especially out of finishing this series. I hoped that my current audio book (Eloisa James’s Three Weeks with Lady X) would entertain me without overtaxing my poor brain while I followed the design. And in fact it seems just right as a combination of activities — except that I couldn’t help noticing that since the last time I worked with the pattern, it has somehow shrunk so that it’s much harder to see! (Well, OK, actually my eyes have gotten weaker.) Also, the needles: were they always so hard to thread? So those were two blunt reminders that time had passed. And they got me thinking about how much harder this kind of finicky work is going to get as I keep aging, which got me thinking that I’d better not wait another decade before starting (or finishing) Henry and Jane Seymour, because even if I am very lucky and stay healthy and safe from accident or catastrophe — even then, who knows how much more time I’ve got to work on them?

Suddenly, I feel the truth of a commonplace indeed: time passes. 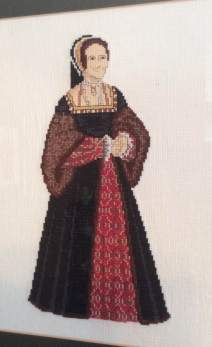 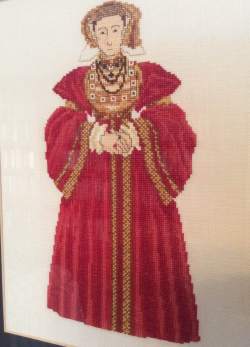 Update: Lest y’all doubt my Woolf credentials, here’s one of the bravest (for me) pieces I’ve written for OLM – a literary essay in appreciation of one of the great literary essayists. Or you could check out the entries in the ‘Woolf, Virginia’ category. I think she’s a genius. It just occasionally occurs to me that she’s not my genius.