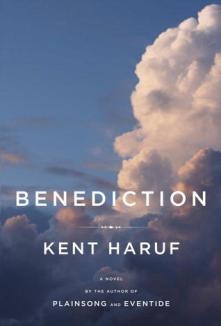 A friend of mine highly recommended Kent Haruf’s Plainsong, but when I looked for it at the bookstore they didn’t have it, so instead I brought home his more recent novel Benediction. It seems to me to have been a happy enough substitution: Plainsong may yet turn out to be better, but I thought Benediction was very good.

Benediction is a quiet novel on a small scale, written in the kind of deliberately understated prose that sometimes makes me impatient but in this case felt just right. The sentences are short and simply structured, mostly plain statements of fact without embellishment:

She got up and went to the house. It was cool inside, the kitchen very clean and neat. there were starched curtains at the windows. The little bathroom was off the kitchen, it was clean and neat too, with a picture of a red flower framed on the wall.

It’s like that all the way through — I chose that example literally just by opening the book to a random page. That kind of absence of style of course is itself a style, a “plain” style, an anti-literary style. It’s terse in the way that Hemingway or Hammett is terse, though without the underlying tension that makes their minimal prose almost melodramatic.

There is drama in Benediction, though; it just lies in the feelings, not the words, and in the overall concept of the book, which is indicated by its title. It’s the story of a dying man, Dad Lewis, of the small cluster of people who are close to him as he dies, and of one person — his estranged son — who is and remains far away. This is a scenario devised, clearly, to prompt reflection about what makes a life meaningful, and about what we might regret or be glad of in our last days. Dad is a man who has done both harm and good: he is far from a saint, but his wife loves him faithfully and his community respects him. His situation and even his character are in some senses generic, but Haruf makes him specific enough that his failings and his efforts to atone have their own particular pathos. 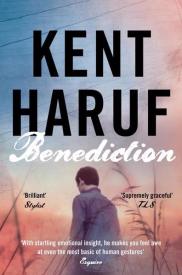 Dad is at the center of Benediction, but the novel’s attention radiates out from him to the small struggles and successes of those around him. Notable among these is the town minister, Rob Lyle, who has been sent to the town of Holt after causing trouble in Denver — trouble he ends up reiterating in Holt because (as he says in his own defense) “I had to say it . . . It’s the truth.” The truth he preaches is love, which sounds common enough except that he suggests people should really mean it, not just pay lip service to it:

And what if we tried it? What if we said to our enemies: We are the most powerful nation on earth. We can destroy you. We can kill your children. We can make ruins of your cities and villages and when we’re finished you won’t even know how to look for the places where they used to be. . . .

Even though his sermon begins with a passage from the Sermon on the Mount, his message is heard as radical, revolutionary, treasonous. “Are you crazy?” calls out an angry member of his congregation; he is shunned and assaulted; he is voted out of his position. “Did you actually think they’d agree with you?” demands his angry wife. “No, I didn’t think that,” Lyle says, “I had to say it anyway. . . . Because I believe it.”

Lyle’s message of love is a religious one in context, but of course it doesn’t have to be, and neither does the notion of a blessing, or of grace. In the novel, grace is found in what Lyle calls “the precious ordinary”: the novel, like the larger world, is full of people suffering, but it’s also full of “the sweet kindness of one person to another.” Benediction is composed of vignettes of either pain or kindness, moments of action or of memory strung along the connecting thread of Dad’s last few weeks. It offers no epiphany, no great revelation, just the quiet conviction that if we can manage it, forgiveness is our best option, and that forgiveness, and thus peace, is made possible by love, which is “patient and boundless and right-hearted and long-suffering.”

It’s a testament to Haruf’s skill that he manages to makes this message seem true and important, rather than trite. And it’s a sign of his underlying optimism, I think, that he ends his novel about death with the image of a lost child who “found her way home in the dark . . . and so returned to the people who loved her,” and with a reminder that death ends a life, but not life itself.

One thought on ““The Precious Ordinary”: Kent Haruf, Benediction”