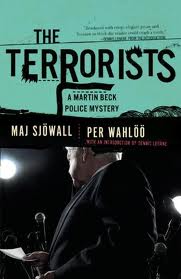 I’ve just finished reading three more of the Martin Beck books by Maj Sjöwall and Per Wahlöö: The Abominable Man, Cop Killer, and The Terrorists, which are, respectively, numbers 7, 9, and 10 in the series. There are now only two I haven’t read (The Man on the Balcony and The Locked Room)–not by design but because they haven’t turned up in the library or at any of the used bookstores I haunt. I think that the eight I’ve read have given me a very good idea of the series as a whole, and my interest in and respect for what Sjöwall and Wahlöö do in it has only increased as I’ve read along. By the end of the final book the scope and intensity of their critique of contemporary Swedish society has finally become explicit. It is even, finally, articulated at length, rather than gestured at through repeated jabs by the characters and in the narration or through the accumulating examples of incompetence, hypocrisy, and stupidity we got in book after book. It’s interesting that it’s a relatively peripheral character who finally voices the most sustained piece of social criticism in the series. It is carefully prepared for, in The Terrorists, by the juxtaposition of an “actual” terrorist cell that engineers two political assassinations (one of which is ultimately unsuccessful) with a very different kind of attack by someone who, as her lawyer argues, may have committed murder but is best understood as a victim. The terrorists’ attacks are not glorified: in fact, we get a rare close-up of brutality from one of the main characters when two of them are finally cornered (I’m trying to avoid really explicit spoilers, as it is quite a suspenseful story!):

He felt the hatred welling up inside him, a wild, uncontrollable hatred against these people who killed for money without caring who they killed and why. . . . [he] proceeded to smash his opponent’s face and chest repeatedly against the wall. On the last two occasions, [the man] was already unconscious, his clothes soaked with blood, but [he] kept his grip and raised the large limp body, ready to strike again.

“That’s enough now,” says Martin Beck, but there’s no sign that anyone, including Beck, is surprised or moved in any way by the violence shown. In contrast, the alt-assassin is treated sympathetically–during her initial interrogation (which even seems the wrong term to use) Beck offers her food, proposes that they resume after she’s had a rest, and generally gives her every consideration. There’s no question that her action is political, in the broadest sense of the word. She aims (pun intended!) at the head of a state that has shown her only indifference or hostility through its pervasive but ineffective bureaucracies. Nobody in particular has done her any harm: the problems and injustices she faces are systemic. What recourse does one individual have, in such a situation?  “She realized,” her lawyer explains, “that someone must bear the responsibility”–and so she has acted, with a slightly pathetic naïveté. ‘It does seem a bit pointless,” one policeman remarks; “They’ll find another one just like him inside half an hour.”  But her lawyer suggests, that “she is wiser and more right-thinking than most of us.” It’s almost a call to revolution, except that it’s so carefully embedded within the particularities of the case and of the wind-bag lawyer that its risk is contained. Still, it’s out there, as an idea, and the direction of our sympathies towards someone who has basically turned political terrorist because of the repeated small ways she has, in her own private life, been terrorized, is consistent with the overall message of the series that violence generates violence, and that we should not be too quick to equate legality with justice.

There is quite a lot of violence in The Terrorists, some of it quite gruesome. The tone is never sensational, though, only dispiritedly matter-of-fact, even when a head decapitated by an explosion strikes an officer in the chest. The grim potential of these moments is also leavened by Sjöwall and Wahlöö’s characteristic dry humor, which perfectly conveys the attitude of rueful stoicism shown by most of the police officers. The one who is struck in the chest, for instance, is immediately upset about his nice suit. Later the head of a decapitated dog is displayed as evidence and the annoyingly smarmy and incompetent Superintendent, Stig Malm, “at once threw up on the floor,” a moment which gave me more gratification than it probably should have because his bad police work has cost a lot of lives across the series. The cynicism that drives the series is also on full display, as when the proceedings against the apprehended terrorists are described as “among the most farcical that had even been enacted in any Stockholm courtroom.” If we had any lingering idealism about the system that has failed the first accused assassin, it’s dispelled here. After the case and the evidence against the men has been presented, we get this:

“I oppose the arraignment,” said the defense counsel.

“Why?” asked the judge, a flash of genuine surprise in his voice.

The defense counsel sat in silence for a moment, then said, “I don’t really know.”

With this brilliant remark, the proceedings collapsed…

We end the book, and the series, on an ambivalent note. On the one hand, we settle down for a pleasant evening with four of our main characters,

just the kind of evening everyone hopes for more of.  When everyone is relaxed and in tune with themselves and the world around them. When everyone has eaten and drunk well and knows they are free the next day, as long as nothing too special or horrible or unexpected happens.

If by “everyone” we mean a very small group of humankind.

Four people, to be exact.

The restoration of order and domestic harmony promised by the form of the detective novel is offered but promptly rejected or subverted. Even if that harmony is achieved, it is only for the fortunate few, and even they enjoy it only precariously, only until it is broken once again. In the Martin Beck books, such happy moments actually happen often, but it seems to be a law that the more comfortable you are with your aquavit and your book, or your lover, the more likely it is that the phone will ring and pull you back into the corrupt world. What hope does one individual have against all the wrongs, all the injustices, all the stupidity? The one person who has taken a stand in this book has been labelled insane and locked away, destroyed, not helped. Martin Beck’s long-time partner, Lennart Kollberg, offers his friend some consoling perspective: “Violence has rushed like an avalanche throughout the whole of the Western world over the last ten years. You can’t stop or steer that avalanche on your own. It just increases. That’s not your fault.” “Isn’t it?” asks Beck. “Kollberg … looked at Martin Beck and said, “The trouble with you, Martin, is just that you’ve got the wrong job. At the wrong time. In the wrong part of the world. In the wrong system.” “Is that all?” Becky drily responds.

The final word of the series goes to Kollberg, and, as has been widely noted, is “Marx.” Certainly there’s plenty of disgust expressed for capitalism, by characters but also through theplots of the  novels and their typical allocation of guilt and innocence. The Terrorists even has a long screed against Christmas, which “had changed from a fine traditional family festival into something that might be called economic cheapjackery or commercial insanity.” The defense lawyer’s statement explicitly condemns the way “large and powerful nations within the capitalist bloc have been ruled by people …  who from a lust for power and financial gain have led their peoples into an abyss of egoism, self-indulgence and a view of life based entirely on materialism and ruthlessness toward their fellow human beings.”

Clearly these are books with a political agenda, and moments like these are didactic, riskily so. I think they are dramatically effective, however, because they are rare, and because the series shows no crusading or utopian zeal. In its world, systems are necessary. Bureaucracies are imperfect but essential. Some good police work is better than none; trying to find a just outcome is better than not trying. Change is slow. Work is hard. Patience is a virtue. Life is bleak, but there are small pleasures, like dinner with friends. Martin Beck has no illusions, but he still shows up every day and does his job. It’s an unimpressive but ultimately quite moving form of moral heroism.

I think I may choose The Terrorists for my class in the fall. Usually when approaching a series I assign the first one, as it often makes most obvious what is going to be different, how this author will bend and reshape the conventions of the genre. That also gets me out of the awkward backstory problem (teaching Gaudy Night, I’m always tempted to [and often do] interject with context from the previous books). But here, though I think all the ones I’ve read are outstanding, and Roseanna would be a really interesting book to read right after studying hard-boiled detective fiction and then Ed McBain, I think this one makes the political work Sjöwall and Wahlöö are doing most evident, and that is something that really does make their series distinct. It shows a conviction (one often echoed by today’s practitioners of the genre, such as Ian Rankin) that the detective novel really be both artistically effective and ideologically significant, and not just as a means for celebrating and protecting the status quo. That doesn’t mean Sjöwall and Wahlöö are necessarily successful or persuasive in every aspect of their project, but I think it will give us a lot to talk about.

10 thoughts on “Sjöwall and Wahlöö, The Terrorists”