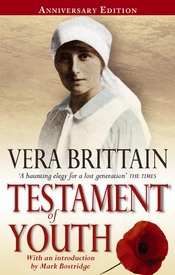 Now that I’ve finished reading Testament of Youth, I am most impressed by it as a testament to Brittain’s determination to understand and give meaning to the war. Though the book is often very poignant (as in the excerpt I posted last time), it’s not, ultimately, an emotional book so much as it is an intellectual book. I like the book better for that commitment to thought over feeling, or to thought about feeling, and I admired Brittain, too, for facing up to what she felt was her responsibility to those who had died by doing something more than grieving for them. “How like we were,” she thinks at one point, “to the fighters of those old wars, trusting to the irresponsible caprices of an importuned God to deliver us from blunders and barbarisms for which we only were responsible, and from which we alone could deliver ourselves and our rocking  civilization.” Her lack of religious belief turns her away from such a passive response toward attention to the human and historical causes of the devastation she witnesses. Returning to Oxford after the Armistice, she turns from her study of literature to history, economics, and politics:

Henceforward . . . people will count only in so far as they recognize their background and help to create and change it. We should never be at the mercy of Providence if only we understood that we ourselves are Providence; our lives, and our children’s lives, will be rational, balanced, well-proportioned, to exactly the extent that we recognize this fundamental truth. . . . I don’t know yet what I can do, I concluded, to help all this to happen, but at least I can begin by trying to understand where humanity failed and civilisation went wrong. If only I and a few other people succeed in this, it may be worth while that our lives have been lived; it may even be worth that the lives of the others have been laid down.

The final section of the book chronicles her attempts to achieve this understanding and then act on what she has learned through her lectures, journalism, and political activism. How much more impressive this is than falling back on wishful platitudes about the inscrutability of God’s plan or the better place where the dead now reside. It’s appropriate that she returns a few times to her reading of George Eliot, who had very much the same insight about our relationship to what we call “Providence,” and the same sense that from it comes a duty to ourselves and others every bit as challenging and more morally elevating than obedience (under the promise of reward and the threat of punishment) to religious authority.

Brittain is similarly rational and deliberative in her approach to marriage, which seems to her not at all a desirable end in itself and, potentially, a threat to everything she works for as a feminist:

In spite of the feminine family tradition and the relentless social pressure which had placed an artificial emphasis on marriage for all women born, like myself, in the eighteen-nineties, I had always held and still believed it to be irrelevant to the main purpose of life. For a woman as for a man, marriage might enormously help or devastatingly hinder the growth of her power to contribute something impersonally valuable to the community in which she lived, but it was not that power, and could not be regarded as an end in itself. Nor, even, were children ends in themselves; it was useless to go on producing human beings merely in order that they, in their sequence, might produce others, and never turn from this business of continuous procreation to the accomplishment of some definite and lasting piece of work.

When marriage becomes a specific possibility rather than a theoretical issue (the courtship is, aptly, conducted largely by correspondence, through shared reading and writing and argumentation), she continues to worry, not just about whether it might compromise her political and professional commitments but also about whether she can marry and yet keep faith with those who died in the war. Marriage represents an emotional severance of the past from the present: “so long, I knew, as I remained unmarried I was merely a survivor from the past. . . . To marry would be to dissociate myself from that past, for marriage inevitably brought with it a future.”  Waking from a troubling dream in which her dead fiancé returns, facing her with an anguished choice between him and her new love, she remembers

with a startling sense of relief, that there was no resurrection to complicate the changing relationships forced on men and women by the sheer passage of earthly time. There was only a brief interval between darkness and darkness in which to fulfil obligations, both to individuals and society, which could not be postponed to the comfortable futurity of a compensating heaven.

Repeatedly through these years of her life Brittain faces what George Eliot calls “the burden of choice.” The courage she has to find is not the same as that shown by the young men (including so many she knew and loved) who faced death in the trenches, but it has its own dignity and significance. Even her decision to marry is part of the war she is fighting. Against the expectations that marriage ends women’s participation in a wider social and political life, she hopes to demonstrate that the experience of marriage and children “rendered the woman who accepted them the more and not the less able to take the world’s pulse, to estimate its tendencies, to play some definite, hard-headed, hard-working part in furthering the constructive ends of a political civilisation.”

The demonstration would not, I was well aware, be easy; for me and my contemporaries our old enemies–the Victorian tradition of womanhood, a carefully trained conscience, a sheltered youth, an imperfect education, lost time, blasted years–were still there and always would be; we seemed to be for ever slaying them, and they to be for ever rising again. Yet even these handicaps I no longer resented, for I was ceasing at last to feel bitterness against the obstacles that had impeded for half a lifetime my fight for freedom to work and to create. Dimly I perceived that it was these very handicaps and my struggle against them which had lifted life out of mediocrity, given it glamour, made it worth while; that the individuals from whom destiny demands too much are infinitely more vital than those of whom it asks too little. In one sense I was my war; my war was I; without it I should do nothing and be nothing. if marriage made the whole fight harder, so much the better; it would become part of my war and as this I would face it, and show that, however stubborn any domestic problem, a lasting solution could be found if only men and women would seek it together.

This may seem an elaborate rationalization of a decision she longs to make for other highly personal reasons. To me, though, it’s precisely the conversation a thoughtful woman had to have (possibly, still, has to have) about entering into an institution that for so long turned that personal relationship into one with so many complicated and disadvantageous legal, political, economic, and social consequences for women–at the time she writes about, for instance, a Matrimonial Causes Bill was debated and finally passed, “and for the first time in England the rights of men and women were equal with regard to divorce.”

I expected to be moved to tears by Testament of Youth. I was, but it matters more to me, and seems more fitted to Brittain’s own aims and accomplishments, that I was moved to great respect for her. I’m looking forward to starting Testament of Friendship soon.

One thought on “An Examined Life: Vera Brittain, Testament of Youth”