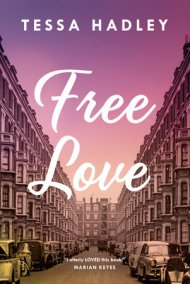 Phyllis felt after this meeting with Nicky that she had crossed a line, like being on board a ship where there were certain ceremonies for when you crossed the Equator. It wasn’t only that Nicky spoke as if they might go out together and she could meet his friends, gain entry to a whole new world of social relations. It was that she knew nothing about this world of his. Everything she’d ever known had been nothing: she might as well scrape away all the things she’d taken for granted all her life, to begin again. She seemed to watch herself undressing, in that room of Nicky’s with no accretions of furniture or domesticity, dropping the pieces of her clothing one by one onto the bare floorboards, leaving her old self behind, climbing into his bed, weightless and transparent as a naked soul in an old painting.

If you like the passage I took as my epigraph for this post, you’ll probably like Free Love overall, or at any rate you will like it more than I did, which wasn’t much at all. Since I finished reading it, I have puzzled over why I disliked it so much. None of the reasons I came up with are faults in the novel itself, I don’t think, although I suppose you could construe them that way if you take it as a ‘fault’ to be a certain kind of novel. But why would you? (Why would I?) The house of fiction has many windows, etc.

I’ll comment on a few of the things I disliked about the novel, while acknowledging that some of them are idiosyncratic and others probably evidence of inadequate attention, and also that I was just generally out of sorts the day I finished reading it. (And yet the right book can change my mood, so that can’t be all that was going on.) First of all, it’s more or less all like that passage: meticulous, well-crafted (almost too conspicuously so), analytical, unemotional. Free Love has the kind of flat affect I associate with a lot of contemporary writers, which always seems pitched to the kind of reader that considers “unsentimental” high praise. It is full of well-observed details, but they felt well-observed to me: I could never lose myself in the descriptions, or feel something emerging from beyond them—something you might call theme,  or meaning. Even though the novel deals a lot in people’s inner worlds, it always felt superficial, never immersive. The way prose reads to us can be so idiosyncratic, though: perhaps other readers are carried away by Hadley’s style, or perhaps this is not something they want from her, or from anyone. 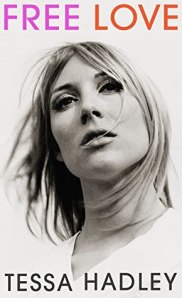 The novel turns on a dramatic act of rebellion: suburban housewife Phyllis leaves her home, husband, and children to move in with her lover (who, spoiler alert, turns out—in what felt like a completely unnecessary plot wrinkle—to be her husband’s son by another woman). It’s a decision that should have felt weighty, dramatic, consequential, but it did not feel well motivated: it’s impulsive, and it’s only after the fact that Phyllis really begins to understand the social upheavals that she asserts interest in. If she has an epiphany, it’s an unconvincing one, and (maybe this is just my Victorian moralist showing up) yet Phyllis ups and walks away from people who love and need her, as if duty doesn’t mean anything in the face of desire. I found her both uninteresting and unsympathetic, a bad combination, and the novel just presents her, so I was never really sure whether I was supposed to feel differently.

I could go on about the other characters I didn’t care about, but that’s no fun, and also it might make it sound as if I require “relatable” characters to like a novel, which is not true. (It may be more true about what I require from the implied author.)  My impatience with Free Love was more to do with my impression that it carefully depicted a moment in time but did not bring a novelistic sensibility or perspective to that depiction that I could get a grasp on. What’s the point of all of it? (And by the end, it did seem like there was a lot of it.) Maybe I haven’t read the right other books to appreciate it (Dorian mentioned that he liked it as a spin on Doris Lessing, for example, and I wouldn’t know). Hadley mentions having immersed herself in writers from the period, including Margaret Drabble—but I haven’t had the same stifled reaction to Drabble’s novels. I reviewed Late In the Day for the TLS and was a bit lukewarm, which should maybe have been a caution. Frances Wilson reviewed Free Love, I think admiringly, though actually the review (not unlike my earlier one) is noncommittal about evaluation and admits Hadley’s “cold eye.” Is that praise or criticism? Maybe neither, but it’s accurate, and it’s as good an explanation as any other one I have for my negative reaction.