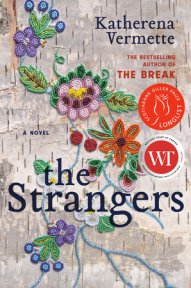 That’s what everyone became, small stories, tiny really, to explain their whole lives. Those too-short lives.

Margaret used to think this was normal, that all families were made up of so many sad stories. But as she got older, it seemed only Indians, Métis, who had sorrow built into their bones, who exchanged despair as ordinarily as recipes, who had devastation after devastation after dismissal after denial woven into their skin. As if sad stories were the only heirloom they had to pass on.

This excerpt from Katherena Vermette’s The Strangers perfectly captures the kind of book it is: it is a collection of the sad stories that make up the family the novel is named for. They are sad stories indeed—and sometimes also infuriating or horrifying—and they are important stories to tell. The value of that project makes The Strangers a difficult book to criticize—but on the other hand, if all I wanted was information, I would choose a documentary form, not fiction.

The challenge of writing a highly topical novel is to make it compelling as art. Vermette did this brilliantly with The Break, which used the structure and momentum of a whodunit to explore complicated and ultimately far-reaching questions about guilt, responsibility, and social justice. By the end of The Break it is obvious that knowing who committed the specific assault that launches the novel’s plot is not going to fix anything that really matters about the world Vermette has shown us. The world of The Strangers is the same one—it is not so much a sequel as a companion to its predecessor. But it lacks the feeling of urgency that made The Break so readable: it just plods unhappily along. Even as time passes in it, The Strangers doesn’t seem to be going anywhere. It ends on a faintly hopeful note, but the conclusion doesn’t feel like a resolution: it’s just the next thing that happens. Like The Break it has an array of voices and an intricate narrative structure, with multiple timelines and perspectives interwoven; in The Strangers I often found the shifts in time or point of view confusing, rather than thought-provoking, and the characters blurring into one another. It feels awkward to say this about this particular novel, given the stories it specifically tells, but it just wasn’t very interesting to read qua novel.

It’s certainly possible that I’ve underestimated The Strangers, and also that the degree to which I kept comparing it to The Break as I read put it at an unfair disadvantage. It’s not that I object in principle to novels that have what we might broadly call sociological or political aims, or aims to give voice or space to stories that are too often denied them: Gaskell fan here, after all! But Gaskell knew well the importance of plot, of drama, even of melodrama, for carrying her vision outwards. Vermette, on my reading, does not create memorable or impressive fiction out of her sad stories this time—she just tells them, and in the end that isn’t quite enough.