I shook mightily, casting the grime from my feathers. Then I rose, bringing my wing tips together with a terrific burst of claps. The air above me was deformed, chaotic, utterly disordered by the detonating shells. I found still air, and I dug my wings into it. I found billows of heat, and I rode them up. . . In moments of extraordinary difficulty, one rises above oneself: one becomes an aura, overcast and vaporous. Above the ooze and above the bursts, above the horizontal hailstorm of bullets from the hills.

One reason I relished Cher Ami and Major Whittlesey so much is that the novel could easily have been a disaster. Its whole concept is hugely risky, and instead of rising above the difficulties it creates, as she (more or less) does, Rooney could well have ended up with something twee or cutesy or wretchedly sentimental. Instead, she has somehow written a touching and (mostly) believable novel in which the narrating voice alternates between Charles Whittlesey–gay, wry, upright, and heroic–and Cher Ami, a smart, affectionate, heroic nonbinary homing pigeon, now stuffed and in the Smithsonian.

Cher Ami and Major Whittlesey is a fictionalized re-telling of the true story of the “Lost Battalion,” an American regiment that got cut off from their main force and ended up under a terrible barrage of friendly fire that ended thanks to Cher Ami, who carried news of the catastrophic mix-up back to the commanders behind the front lines. Whittlesey, as Rooney explains in the “historical note” that concludes the book, was “the courageous and compassionate commanding officer of the Lost Battalion.” Both he and Cher Ami earned medals and fame for their brave actions. 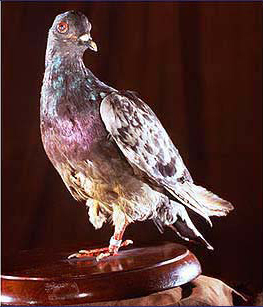 Rooney actually took at least two big risks in taking on this particular subject–or, in taking it on the way she did. The first is the obvious one: a pigeon narrator! But I think this leap of imaginative faith was necessary to mitigate the second risk, which is telling yet another story of bravery and brotherhood in the trenches. To some extent Cher Ami and Major Whittlesey is exactly that kind of book, and this literary ground is so well-trodden that even the best new treatments can seem clichéd (and the not-so-good ones are worse).

Starting the next day, time became featureless, a fever fugue of suffering punctuated by German attacks. Those arterial pulses of horror only underscored our swampy passivity: the routine of the ordeal. . . . The customary barrage flew over our heads: tons upon tons of shells loaded with shrapnel and high explosives, bring detonations and pandemonium to the territory we’d be advancing through, concussing the men’s skulls. . . The battalion advanced, sending its wounded to the rear. Every prospective path forward was snarled by underbrush or barbed wire or both, often in tangles deeper than the men were tall. The forms of these sprawling barriers seemed to reflect the madness of the war, antic and perverse and sometimes wickedly clever.

Rooney’s trench tale is well told, but it wouldn’t be particularly memorable if it weren’t for Cher Ami–both her role in the specific incident Rooney recounts and Rooney’s daring decision to let her tell it herself, and in doing so to treat her as in every way as equivalent to Charles Whittlesey, in her depth as a character, in her perceptiveness about the war she’s fighting in, and as a figure of historical significance. The execution of this concept didn’t always work for me: I couldn’t always shake off the sense of its artifice, especially given the way Cher Ami speaks, which I’ll come back to in a moment. The attempt itself was exciting, though. It brought novelty; it felt imaginative, which I enjoy; and it also (or so I thought) ended up showing that Cher Ami and Major Whittlesey is in some sense only incidentally a war novel.

Rooney draws attention to the equivalence between her alternating narrators by starting off their paired chapters the same way every time. A couple of sample openers:

Monuments matter most to pigeons and soldiers.

I myself have become a monument, a feathered statue inside a glass case.

In life I was both a pigeon and a soldier. In death I am a piece of mediocre taxidermy, collecting dust in the Smithsonian Institution’s National Museum of American History.

Monuments matter most to pigeons and soldiers.

Some matter more than others. None matter more to me than the Soldiers’ and Sailors’ Monument on Riverside Drive on the Upper West Side.

It’s not a monument for my war, the Great War, the war that has caused me to be known these past three years as “Go to Hell” Whittlesey, heroic commander of the Lost Battalion.

Take the thing that bothers you and place it in parentheses.

I’ve told myself that a thousand times since we got stuck in the Pocket. Bracket the death that spatters against you.

But not a day has slipped by these past hundred years that I haven’t recollected my final flight.

Take the thing that bothers you and place it in parentheses.

I’ve told myself that a thousand times since we got stuck in the Pocket. Bracket the death that spatters against you. Set that clotted mess aside and do not look at it any more.

But hardly an hour has slipped by these past three years without my recollecting those five days under fire without food or water, when we, the 308th, bled out, only to rise again like revenants as the Lost Battalion.

This is a structural reflection of Rooney’s commitment to equivalence between her human and her animal protagonists, and by the end that equivalence seemed to be the real point of the novel. It’s making the case against speciesism; it pushes us repeatedly to consider why we (including novelists) typically treat animals as accessories to human stories if we consider them at all, rather than accepting that they have their own whole, intrinsically meaningful lives and perspectives. “I think of these numbers still all the time,” says Cher Ami as she reflects on the devastating human casualties on the front; but also,

I think of the eight million horses who died in the Great War, roughly the same number killed as all the soldiers of all the human armies.

I think of how humans used over a hundred thousand of us pigeons on the battlefield, and with a 98 percent success rate. Of how twenty thousand of us lost our lives in combat.

hunting, taming, training, breeding, eating; warping our bodies and instincts away from nature, towards their own ends–and they imagine that their great power puts them beyond our regard, beyond our judgment.

To Cher Ami, and in this novel, the truly heroic humans are not the ones who stand tall under fire or courageously lead their troops over the top to their deaths but those who, like Bill Cavanaugh (“the 308th Infantry Regiment’s greatest pigeon man”) look at their animal colleagues “with a feeling of reciprocity.” Whittlesey is a brave soldier, but his love for Bill Cavanaugh and the respect he shows for pigeons are what matter most to Cher Ami’s judgment of him.

Giving Cher Ami fully half of the novel is a way of making its form reflect this principle, and overall it works surprisingly well if you are prepared to take the leap, to willingly suspend your disbelief that you are listening to a pigeon–and not just a pigeon but an inexplicably immortal one. You have to buy a few other unlikely things too, including the ability of animals of various species to “talk” with each other. Again, this is all pretty deftly done, and against its unreality Rooney sets a lot of fascinating lore about pigeons, how they live and fly and love and home, which anchors her fanciful approach in fact.

That said, her whole approach is a flamboyant adventure in anthropomorphism: if I were inclined to be critical about the book, I might start there, with the idea that the best way to earn our respect for animals is to depict them as essentially human-like. For all the specific references to pigeon behaviors and preferences, Cher Ami doesn’t really seem much more bird-like in her consciousness than Margalo in Stuart Little 2. I also got a bit tired of Rooney’s using her as a device for social commentary and criticism: for a stuffed bird, Cher Ami gets pretty preachy about racism and sexism and militarism. Those were the moments when my own commitment to Rooney’s experiment got the most wobbly. In contrast, my engagement with Charles Whittlesey never wavered. The sad story of his inability to recover from what he saw and did in “the Pocket” during those terrifying days–the very things that, to others, made him a hero–is a more powerful critique of war and the cynicism of its leaders and promoters than any of Cher Ami’s more didactic remarks.

The other World War I novel Cher Ami and Major Whittlesey most reminded me of was Timothy Findley’s The Wars, because there too it is animals who force a moral reckoning. Findley does not go as far as Rooney in addressing the animals’ own perspectives: in fact, it’s their inability to speak or act for themselves that arouses Robert Ross’s rage and, ultimately, rebellion. The horses are provocations for his crisis of conscience, not meaningful agents in themselves. The affinity between the two novels lies in their aversion to the human arrogance that subordinates other living creatures to our often highly destructive priorities. World War I is often talked about as particularly tragic because its losses served no higher purpose. “The defeat of Hitler and company,” as Cher Ami remarks,

can be presented as a quest far more noble and necessary than the First World War, the obscure origins and anticlimactic end of which are befuddling even to superlative armchair historians.

Again, this is a familiar take on a well-known story. Perhaps we don’t really need a pigeon to tell it to us one more time! On the other hand, as Rooney’s novel suggests, maybe if we listened–really listened–to the creatures we share our planet with, we could avoid some further horrors, or at least understand better what the real costs are of our way of life, and who pays them along with us.