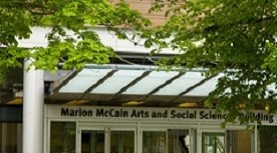 I certainly did not desire the disruption that has characterized my last few days at work! My office building was evacuated Thursday morning–just as I was settling in to do, well, a whole bunch of things! It turned out that due to some kind of maintenance mix-up, some chemicals got mixed into the building’s main water supply. As a result, they had to flush the entire system multiple times and then retest it. All the classes usually held in the building had to be relocated–which, thanks to heroic efforts by the team at the Registrar’s Office, was done more or less successfully. And all of us who ordinarily work in the building were turned loose on campus, where we set up shop for office hours and whatever else we had to do wherever we could find a spot. We were allowed to go back in with an escort from Dal Security to get essentials from our offices, but that’s not the same as having access to all our books, papers, and other supplies, not to mention our computers! Happily the test results have been good and we are going to be back in the building and back to normal operations tomorrow.

I say the relocation was “more or less” successful because on both Friday and today my Women & Detective Fiction seminar was sent to a room that turned out not to be available, which meant last minute scrambling to find alternatives and then rushing to get to the new new room as fast as we could. I’ve got a great batch of students this term–very smart and engaged and talkative–and I really appreciated their persistence as we trekked around and then made the most of the time we had left. (This is not our first “crisis” either: the power went off during one of our class sessions on An Unsuitable Job for a Woman but we weren’t ordered out of the building right away so we kept going with the lights off. Fortunately our regular meeting room has big windows, so it was dim but workable!)

We have been working through Sue Grafton’s A is for Alibi, which everyone seems to have enjoyed quite a bit. It is fast-moving and sassy in a way that (IMHO) Grafton’s later novels are not; she started taking the whole project too seriously, I think, but (again, YMMV) isn’t really a deep enough thinker or a smart enough writer to pull it off. In previous years I have assigned both A is for Alibi and Sara Paretsky’s Indemnity Only in this seminar, and I used to alternate between them in my survey course on detective fiction. In recent years I let Grafton slip out of the rotation because I think Paretsky’s novel is better, or at least its various parts cohere better. Paretsky is clearly using the form and conventions of detective fiction for a political purpose, but I think she does it deftly enough that it doesn’t feel overly didactic.

I was reminded this week, though, that besides being a bit more fun, Grafton’s novel has its own thought-provoking elements, particularly in its development of a male character who plays the part of the femme fatale and also (as other critics have noted) of an extreme form of the Byronic hero–mad, bad, and dangerously sexy to the female protagonist. In our discussion, we found it interesting that while the male hard-boiled PI rarely seems genuinely attracted to the femme fatale, whose allure (at least in the examples we could think of) is too transparently a decoy, Kinsey and Charlie do seem to have an actual spark, even an affinity. Desire is conventionally disruptive to the detective’s work, and it is to Kinsey’s too, but at the same time it almost feels as if it’s just bad luck he’s a murderer, because otherwise they’re pretty well suited! Kinsey’s resolute independence–her refusal to be domestic or to conform to gendered expectations–is refreshing, though I think some aspects of it (like the pride she takes in pumping her own gas) also feel a bit dated now.

In Pulp Fiction we have been wrapping up work on the second assignment, with drafts and peer editing on Friday and the final versions due Wednesday. Today I gave my opening lecture on romance fiction. Our initial readings are two somewhat polemical primers on the genre (Jennifer Crusie’s “Defeating the Critics” and Loretta Chase’s “Rules for Romance,” from Sarah Wendell’s Everything I Know About Love I Learned From Romance Novels) along with Liz Fielding’s “Secret Wedding” . I chose “Secret Wedding” to lead off this unit because it is at once a very straightforward and fairly sweet story and a cleverly self-conscious introduction to romance tropes: the heroine is a romance novelist and each chapter opens with a bit of advice from the her “writing workshop notes.” Also, the hero writes thrillers and his publisher has sent him to one of the heroine’s workshops to learn how to put the “humanity” back into his books–so that’s a neat way to point out that romance has different priorities than the other genres we’ve been studying. Chase’s “rules” do this as well, and they also, unsurprisingly, set us up nicely to begin our study of Lord of Scoundrels–in which desire is definitely disruptive, but in a good way!

It is a busy time of term for everyone, so it was less than ideal to have our routines so disrupted. On the bright side, we have no classes next week, so while there will still be a lot to do (for instance, all those papers coming in Wednesday will need to be marked!) it will be a welcome respite from the daily grind of classes. It’s startling to be here already, though, especially knowing that when we get back from the break we will be hurtling towards the end.