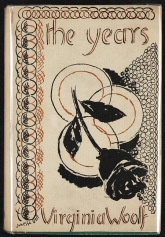 It has not felt like a very productive week, though it is hard for me to be sure right now as I am still in the “muddy middle” of the research I have been puttering away on since April. I am definitely out of practice at working without a narrowly defined goal and a specific deadline! While sometimes it still feels luxurious just to be reading and thinking, and while I am well aware that time to do that is literally a luxury, at other times it feels aimless or, worse, pointless. What will come of this effort? Will anything come of it? It isn’t nothing to learn new things, of course, but the other part of this job is to add to them in some way myself.

I’m trying to have faith that I will figure out what I’ve got to say eventually, and (at least as important) to what audience. I don’t think I want to write a strictly academic paper: I think I want to keep working in that interstitial space between academic criticism and literary journalism. I’m feeling a bit discouraged about doing that right now, though, because that will mean pitching my idea (whatever it turns out to be) and not only am I not very good at that but I am also a bit turned off at the moment about the kind of literary writing that seems marketable–the intensely personal (which, with rare exceptions, is the least interesting kind to me), the immediately relevant (which I have at least tried my hand at, though I felt a tad squeamish about it), or the “rescued from obscurity”. (One good recent essay about the pressure to generate a certain kind of story is this one by Joanna Scutts; another is this one by B. D. McClay.) Since I do not have to literally sell whatever essay I write, I have the luxury (another one!) of writing whatever kind of essay I actually want, but I would like it to be of interest and to be read by other people too, so I have to at least consider where it might fit. 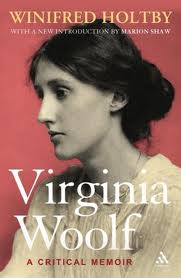 But I need to know what it’s about first — beyond what I know so far, which is that it will in some way be about Winifred Holtby and Virginia Woolf, especially The Years and Three Guineas, and maybe also Middlemarch and North and South, because what I’ve been thinking and reading about is the “novel of purpose” (one of the books I was recently taking notes on is Amanda Claybaugh’s The Novel of Purpose) and how Woolf does and doesn’t fit in to that 19th-century tradition. One sign that I’m not just spinning my wheels is that I am better able now to narrow the scope of my searches, and also some of the discussions in my sources are getting familiar: I know not just a lot of the basic context around the composition of The Years (starting with The Pargiters and ending with the two books we now have) but at least some of the main lines of critical discussion around both Holtby and Woolf. Not Woolf scholarship as a whole, of course: I have had to fight off discouragement brought on by its vastness, which a crude search on the MLA Bibliography suggests now overwhelms the scholarship on George Eliot–6784 entries vs. 3972. (What was I thinking, fleeing what seemed to me like an overpopulated field for one even more crowded?) 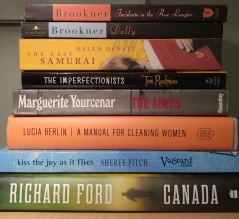 My other reading has also felt relatively unproductive, though I suppose productivity is not really an appropriate measure for it (though I have long struggled with how or whether to make distinctions between reading and research). I have not actually finished a book since Iza’s Ballad. I have started a couple, and one of them, Tom Rachman’s The Imperfectionists, I nearly finished, but though I liked the concept (it tells a kind of history of the newspaper business across decades through a linked series of character sketches) and I can’t point to anything wrong with the execution (each sketch is briskly vivid), I just felt less and less motivated to go back to it and finally gave it up. Sometimes reluctant persistence just backfires: in this case, because I felt guilty about not reading The Imperfectionists I kept watching TV instead of picking up another book. As a result I have made great progress on rewatching The Wire (I’m nearly finished Season 4, which is as heartbreaking and infuriating as I remembered it). This morning I picked Anita Brookner’s Dolly off the shelf–like The Imperfectionists, it’s a recent acquisition from the ‘Women for Music’ book sale. I like it already, so here’s hoping it breaks the slump.