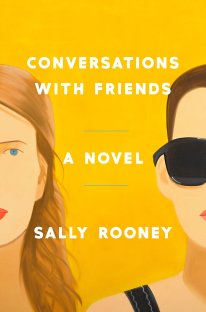 I don’t typically post about books I didn’t finish, and I don’t want to make a big contrarian to-do about my having given up on Conversations With Friends, but it is what I’ve been reading lately and I have given up on it, so I might as well at least comment briefly on it here.

I began the novel with some skepticism but also, as always, with the hope that I’d be pleasantly surprised. I told the friend who kindly lent me her copy that I feared it was going to be yet another new novel that is “coolly underwritten,” and it is exactly that. I tried to keep an open mind, though, especially because books that are minimalist in some ways can sometimes be very powerful. For me, books like that would include all the ones I’ve ready by Kent Haruf, for instance, though not Elizabeth Strout’s My Name Is Lucy Barton, which I said ultimately read to me as if Strout had “used this dispersed form to let herself off the hook.”

It wasn’t exactly, or entirely, the spareness of Conversations With Friends that put me off it, however. It was something about the quality of the sentences, which seemed flat to the point of monotonous: not just the flat affect I’ve protested against before in highly polished contemporary fiction (even really smart fiction I admire, like Sarah Moss’s Signs for Lost Children) but wearisomely unvaried in their tone and rhythm. A sample, chosen (honest!) by just letting the book fall open anywhere:

When I arrived at the house all the windows and doors were open. I rang the doorbell anyway. When I got inside he was drying his hands on a tea towel, like he’d just finished washing up. He smiled and told me he’d been feeling nervous about seeing me again. The dog was lying on the sofa. I hadn’t seen her on the sofa before and wondered if maybe Melissa wouldn’t let her sleep there. I asked Nick why he was nervous and he laughed and made a little shrugging gesture, though one that seemed more relaxed than anxious. I leaned my back against the countertop while he folded the towel away.

I was bored stiff by the process of reading Rooney’s prose, and while I am open to arguments about how really this effect is all about the narrator’s own inadequacies in some way, I simply didn’t care enough about Frances–or anyone else in the novel, as they all seemed equal parts dull and insufferable–to press on past page 100. Whatever revelation or maturation or epiphany lies ahead for Frances, she’s going to have to go through it without me as a witness.

Postscript: Now I’m reading Magda Szabó’s Iza’s Ballad. How much more interesting, in every way, is this little excerpt than that quotation from Conversations with Friends? “‘The yellow globes shone jovially through the mesh of the bag. ‘She’s trying to work magic,’ thought the doctor. ‘She wants to work magic with three miserable lemons. She thinks that if she shows death she is not frightened of it, it will run away. She thinks that if she turns up at the old man’s bedside with lemons she will find him still alive.'”