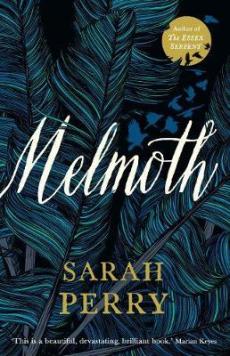 I do know this. There is no Melmoth, no wanderer, no cursed soul walking for two-thousand years towards her own redemption–there is nothing to fear in the shadows on Charles Bridge, in the jackdaws on the windowsill, in the way the shadows on the wall seem sometimes blacker than they should (you are nodding–I know it–you have felt these things too!). No, Thea, there is no Melmoth, there is nobody watching, there is only us. And if there is only us, we must do what Melmoth would do: see what must be seen–bear witness to what must not be forgotten.

Melmoth is that rare thing: a thoroughly entertaining novel of ideas. While in some respects it is a deliciously fearless pastiche of Gothic novels (its title harks back to Charles Maturin’s 1820 novel Melmoth the Wanderer, which is also constructed as a series of documents and framed narratives), it balances its more fantastical elements with sections of grimly compelling historical testimony about the worst human beings are capable of. Through the narrative of Joseph Hoffman, we see hatred, prejudice, and betrayal in Nazi-occupied Prague; the account of Sir David Ellerby bears chilling witness to the evils of religious persecution in 17th-century England; in her diary, a young girl in 1930s Cairo records the story of a nameless Turkish bureaucrat whose “inconsequential” paperwork has genocidal implications:

The memorandum was drafted, and approved, and signed in triplicate; it was signed by his superiors, and by his superiors’ superiors. By morning it awaited attention on desks further afield than Nameless himself had ever traveled; within the week those black marks on that white paper became deeds, not words, and 235 Armenian intellectuals were deported from Constantinople to Ankara.

Later it becomes “necessary to devise a practical means of moving ten thousand Armenians into the interior, where they could do no mischief.” As the new plan unfolds, Nameless and his brother Hassan are at once willingly complicit in and willfully oblivious to the evil they do. But here, and in every horror story Perry’s novel incorporates, there is an unrelenting witness:

“Brothers,” she said. She lifted the bundle she held and crooned to it. “Brothers, didn’t you expect to find me here? Don’t you know me? Don’t you know my name? I, who saw your mother’s pain as she gave birth? Didn’t you see my shadow on the page as you went about your work? Didn’t you feel me at your shoulder as you sharpened your pens into knives?”

“Did you think I wouldn’t see?” she whispers as they shrink in horror from her and from what she has shown them; “Did you think there was no witness?”

It is Melmoth who is with them, as she is with Joseph and every other malefactor in the novel, including its unassuming protagonist Helen Franklin, whose guilt over a secret from her past has driven her to live a life of penance and self-deprivation. Her crime is betrayal on a small scale, personal rather than political or historical, but then, as Melmoth’s various stories emphasize, even the greatest moral catastrophe is in fact an accumulation of individual acts, and no amount of privacy or secrecy can salve the guilty conscience. Melmoth is at once a legend and a projection of that conscience. Joseph Hoffman learned her story from his teacher, Herr Schröder. Melmoth was one of “a company of women” who found Jesus’s tomb empty after the crucifixion and then saw him resurrected, but Melmoth denied what she had seen:

Because of it she is cursed to wander the earth without home or respite, until Christ comes again. So she is always watching, always seeking out everything that’s most distressing and most wicked, in a world which is surpassingly wicked, and full of distress. In doing so she bears witness, where there is no witness, and hopes to achieve her salvation.

It is not in your hour of greatest need that Melmoth comes to you, but in your worst hour, when you are most wicked and thus most alone, and she tempts you to join her in her lonely wandering: “So she comes to those at the lowest ebb of life, and those she chooses feel her eyes on them.”

I won’t give away the different ways this sad and creepy story intertwines with the personal and historical narratives that add up to Melmoth the novel, but I will say that I found it wonderfully effective. Though the concept itself is intrinsically melodramatic, as is appropriate to the novel’s Gothic legacy, Perry’s use of it is restrained and she keeps her supernatural wanderer mostly on the margins: a doubt, a shiver, a shadow, a movement of the curtains, a feeling of being followed. The novel itself is not restrained, though: I remarked on Twitter that I was tired of elegant minimalism and looking for writing that showed some writerly glee, and Matthew Reznicek was right that Melmoth shows exactly that.

I also won’t give away the ending, but I thought the final pages implicitly grappled with the question raised by the quotation I chose as my epigraph here: Is there really any witness besides us, and if there isn’t, should it matter to our morality? They also leaven the Gothic darkness with a shimmer of light:

There is something there–something in her, fluttering, weak, making itself felt. She thinks of the box beneath her bed, and its remnants of the time when she had lived. Then she thinks also of another box, another girl–a lid lifted, and all the world’s wickedness let loose. But something had remained then–hope, very small, very frail, like a white moth looking for a flame.

The novel ends with the kind of flourish that might all too easily seem cheap and gimmicky–but I loved it, partly because it is risky, and because it’s fun and playful and also dead serious. It fulfills the spirit of the rest of the novel by drawing us directly into its world–which is, after all, our world. “Dear heart,” she says to us at last; “I’ve watched you so long. . . . won’t you take my hand?” The answer to Melmoth has to be no, but to Melmoth, for me it was an enthusiastic yes–and a somewhat surprised one, as I am not ordinarily enamored of Gothic fiction and as a result, and because I did not love Perry’s previous novel, The Essex Serpent, I had put off reading it. I’m so glad I finally did.