I didn’t think I had read any Megan Abbott before this year,  but when I was at the library picking up You Will Know Me I realized that I had signed out one or two of her noir novels at some point in the past–probably while shopping around for ideas for Mystery & Detective Fiction or Pulp Fiction. I hadn’t put the pieces together, mostly because those books are (fairly cleverly) decked out with vintage-style covers which quite simply don’t look as if they belong with Abbott’s contemporary thrillers. (Shallow of me, I know.) I expect it’s also because I didn’t actually read them, or at least not more than the first few pages. It wasn’t personal; it’s just that noir is not my favorite genre–in fact, to a degree that might surprise the students in Mystery & Detective Fiction, I’m not a voracious reader of crime fiction at all, in any flavor, or not any more. When I do read mysteries nowadays, it’s almost always because I want to keep up with old friends, though I do try new writers intermittently, especially if there’s buzz, and sometimes I do like them–Tana French comes particularly to mind. Apparently, on the basis of that admittedly skimpy sample, Abbott was not among them. 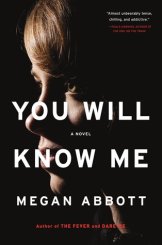 Anyway, lately I’ve been picking up enough buzz about Abbot (who has a new book out) that I thought I would give her what turned out to be another try. First I got hold of The End of Everything–but again I didn’t persist past the first chapter or so. It read like a YA novel, not just because it was centered on teenage girls but because it sounded as if it was written for them. Abbott seems like a self-conscious enough writer that I’m sure she was doing something on purpose with this style, and maybe she went on to do something twisty and surprising with it, but the scenario too seemed a bit pat and familiar and I wasn’t interested in reading on.

You Will Know Me was my next attempt to read one of her books, and it will almost certainly be my last. I did read this one to the end, and there are a lot of things about it that I thought were good or interesting, especially the gimlet-eyed look at competitive gymnastics, which has always equal parts inspired and repelled me. She certainly made it seem every bit as horrendous as I ever imagined! She also knows how to tell a gripping story and keep up the pace–but that’s not altogether a good thing, as I felt manipulated by her heavy-handed foreshadowing even as I started skimming here and there so I could press on more quickly to whatever revelations were to come. When I finished the book, I didn’t feel surprised or shocked, though, much less exhilarated by the experience. I felt tense and dissatisfied and a bit dirty, because so much of the suspense of the novel is really just, or also, or inextricable from, prurient curiosity.

I’m not necessarily calling You Will Know Me a bad book. These are (or are they?) the feelings, the reactions, a thriller depends on and aspires to–which is why I don’t typically read them. There is definitely overlap between thrillers and crime fiction, but for me, the best crime fiction depends on our taking a genuine interest in the people and the outcome, caring about what happens both because it’s possible for us to empathize with at least some of them and because of what’s at stake–the immediate consequences for people’s lives and then beyond that, the possibility of justice, if not realized, than imagined. Other kinds of fiction can also be very suspenseful: Daphne du Maurier or Sarah Waters, for instance. But a novel like Fingersmith is engrossing only initially because it makes us voyeurs and lures us in: then it turns on us, exposes us, and makes us interrogate and repent of our self-absorption. It shows us the moral consequences–for us and for its subjects–of the kind of objectification that a thriller depends on. Fingersmith is also 100 times more subtle and ambitious than You Will Know Me, but that’s not really my point, which is just that I found Abbott’s particular brand of suspense a bit distasteful and ultimately unrewarding.

Perhaps tangential, perhaps not: A lot of people were pretty annoyed at the recent piece about Emily Brontë in the Guardian, and I agree it was a sloppy job, and unconvincing about its complaints. But Wuthering Heights is another novel I’ve never much liked, and it’s for some of the same reasons I didn’t like You Will Know Me, and also, I suppose, the reasons that I really didn’t like Eileen. It’s not that I think every novel must be “nice” or uplifting or offer a feel-good epiphany, but I’d like more of a pay-off–intellectually, or ethically, or aesthetically–for time spent in ugliness than these novels seem to me to offer. Wuthering Heights at least has the compensatory virtue of complex artistry. I didn’t discern anything in Eileen that made up for its unpleasantness–and as readers of this blog well know, I don’t share the trendy opinion that simply being expressively unpleasant is some kind of artistic triumph in itself. I’m very aware that this preference almost certainly says more about me as a reader than it does about these particular books–and to be clear, I think You Will Know Me is probably a pretty good book, of its kind. Maybe I underestimate it, and thus Abbott, but I disliked it too much to want to double-check.

3 thoughts on “In Brief: Megan Abbott, You Will Know Me”