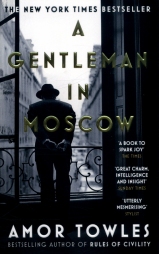 Mishka opened the door to the stairwell, but then paused. Having taken a moment to look over the kitchen with all of its activity and abundance, to look from gentle Andrey to heartfelt Emile, he turned to the Count.

‘Who would have imagined,’ he said, ‘when you were sentenced to life in the Metropol all those years ago, that you had just become the luckiest man in all of Russia.’

Amor Towles’s A Gentleman in Moscow is elegant, reserved, and slightly stuffy–it is, in other words exactly like its protagonist, Count Alexander Rostov. Though he is not the novel’s actual narrator, its third-person narration has exactly his precise, self-consciously courtly tone:

At five o’clock on the twent-first of June, the Count stood before his closet with his hand on his plain gray blazer and hesitated. In a few minutes, he would be on his way to the barbershop for his weekly visit, and then to the Shalyapin to meet Mishka, who would probably be wearing the same brown jacket he’d worn since 1913. As such, the gray blazer seemed a perfectly suitable choice of attire. That is, until one considered that it was an anniversary of sorts–for it had been one year to the day since the count had last set foot outside of the Metropol Hotel.

But how was one to celebrate such an anniversary? And should one?

The Count’s world has shrunk to the size of the Metropol because he has been placed under house arrest there, declared a “former person” for writing (or so the authorities think) a poem judged counter-revolutionary. The central conceit of the novel is that the hotel is at once a microcosm of the larger world from which the Count has been banished and a shelter from it. The small attic room that becomes his quarters when he is displaced from the luxurious suite he once occupied is “without question, the smallest room that he had occupied in his life; yet somehow, with those four walls the world had come and gone.” People of all kinds pass through the Metropol and become his acquaintances, friends, and allies, even though he is now the head waiter in the hotel’s fine dining room rather than a celebrated guest. Watching these relationships gradually knit together into a subversive conspiracy delicately orchestrated by the Count is one of the many pleasures of the novel’s final section.

Before he, or we, can get to that point, there are decades to pass in which the Metropol’s front door remains (with one dramatic exception) an impassable threshold. They are turbulent times in Russia (the Count is escorted back to the Metropol for his imprisonment in 1922, and the novel ends in 1954); one of the most interesting things about A Gentleman in Moscow is how thoroughly but also how indirectly, almost glancingly, it engages with the events of this period. Even as we, along with the Count, are constantly reminded of how much the world outside the hotel is changing, he is by fiat, and we are by art, always at one remove from events. World War II happens entirely off-stage, for example: the novel jumps from 1938 to 1946, though it pauses there for two retrospective pages on Operation Barbarossa, from Hitler’s ambitions to “secure Moscow within four months” to the Germans’ chastened retreat from the outskirts of Moscow in 1942.

Throughout the novel, the vicissitudes of history are recounted with the same wry detachment as the whimsical particulars of the Count’s life in the Metropol:

Let us concede that the early thirties in Russia were unkind.

In addition to starvation in the countryside, the famine of ’32 eventually led to a migration of peasants to the cities, which, in turn, contributed to overcrowded housing, shortages of essential goods, even hooliganism. At the same time, the most stalwart workers in the urban centers were wearying under the burden of the continuous workweek; artists faced tighter constraints on what they could or could not imagine; churches were shuttered, repurposed, or razed; and when revolutionary hero Sergei Kirov was assassinated, the nation was purged of an array of politically unreliable elements.

Towles flirts with disaster, I think: if it were less finely handled, this prose–clearly meant to evoke the dignity of a statelier past, to grace even the grimmest details with a redemptive dash of charm–could seem not just affected but intolerably twee. I’m not 100% sure it quite escapes this fate: the style of the novel could charitably be described as “mannered.” For me, two things kept it from becoming irritating and allowed it instead to be both lovely and sad. One was the close proximity of the narrative voice to the Count himself: the Count is–increasingly, as the novel goes on, but self-consciously throughout–identified with a vanishing past. While inevitably, as it is his novel, that past is often viewed nostalgically, the novel as a whole laments the brutalities of the new regime without being reactionary. In fact, the push and pull between tradition and change, continuity and transformation, not just in Russia but in life itself, is one of the novel’s central themes: it is debated by characters as well as embodied in the Count’s changed life and the ebb and flow of society in the Metropol. “One can revisit the past quite pleasantly,” as the Count eventually reflects, “as long as one does so expecting nearly every aspect of it to have changed.”

The second saving grace for me came, perhaps paradoxically, from the elements of tragedy that provide a sobering contrast to the novel’s overall lightness of touch and spirit. They are few but powerful, and their intensity brings out the poignancy of the Count’s own situation, at once condemned and privileged to be an onlooker. Even the most intimate and rewarding of his relationships within the Metropol are constrained by his confinement–though Towles does a nice job making sure the possibility of a single hotel as a whole world doesn’t feel entirely metaphorical, a process that starts with the Count’s apprenticeship to his young friend Nina early in his enforced residency. Nina too is mostly stuck within the hotel’s limits, but she has learned to make the most of it:

Nina had not contented herself with the views from the upper decks. She had gone below. Behind. Around. About. In the time that Nina had been in the hotel, the walls had not grown inward, they had grown outward, expanding in scope and intricacy. In her first weeks, the building had grown to encompass the life of two city blocks. In her first months, it had grown to encompass half of Moscow. If she lived in the hotel long enough, it would encompass all of Russia.

Nina does not, ultimately, live in the Metropol that long, and certainly not as long as the Count, but her lessons transform the Count’s experience, as does the very different legacy she later bestows on him in the form of her daughter Sofia. And it is Sofia who, in her turn, finally motivates the Count–this “proper, proud, and openhearted” man–to carry out his own personal revolution against the diminished life he has not just endured but done his best to fill with meaning and small moments of rescued beauty.

10 thoughts on ““The Luckiest Man in All of Russia”: Amor Towles, A Gentleman in Moscow”

Leave a Reply to Dab of 4711 Cancel reply