They were staring at him as if he’d gone unhinged. How to explain the workings of the shadow world in a way that would persuade them? He didn’t have to, of course, but Dexter always preferred argument to brute force. “I’m saying we’ve different rules,” he said. “Different practices. What can’t happen in your world can in mine. Including bodies disappearing.”

I was engrossed in Jennifer Egan’s Manhattan Beach from start to finish. It is (as pretty much everyone else writing about it has already pointed out) the opposite in almost every way of A Visit from the Goon Squad, which was clever and formally playful but which, to me, seemed insubstantial, “more like the pleasures of a tapas bar than the satisfaction of a full meal.” Lots of other people thought more highly of Goon Squad than I did, or, to put it another way, understood it better; I enjoyed parts of it but never got my critical bearings. Predictably, I felt much more at home with Manhattan Beach–though here too I was ultimately puzzled by the rapturous reviews quoted on the cover: one calls it “ravishing” and “revelatory,” proclaiming that it will “transport and transform every reader”!! (The jacket copy itself says it is a “magnificent novel” by “one of the great writers of our time,” hyperbole that reminds me of the hilarious book launch for Kafka’s Motorbike in Bridget Jones’s Diary.)

Anyway, hype aside (and as I was once reminded, it’s not as if publicists are going to put nuanced commentary on the cover instead of high praise or pitch it to readers with modest claims such as “a good traditional novel by one of the top 30 American writers of our time”) Manhattan Beach is an excellent traditional historical novel. By “traditional” I mean it is deeply researched and refreshingly (to me) laden with the results of that work. I like exposition, I like artfully displayed period detail, I like neepery–and Manhattan Beach has plenty of all three. Since Goon Squad was my only previous experience with Egan’s fiction, I didn’t know what to expect of her as a historical novelist, or even really as a prose stylist (at least not at any length). I was glad she did not opt for the currently fashionable minimalism. She does not go into Dunnett-like detail, but both the criminal underworld–what gangster Dexter Styles thinks of as the “shadow world”–and the bustling, hi-tech world of the navy yard where Anna Kerrigan works are evoked with great specificity. It is a very atmospheric novel: Egan moves us repeatedly through several different environments, from the upper-crust world of the city’s elite to the rowdy bars where gangsters and dock workers mingle, from the grime and clamor of life aboard ship to the murkily dreamlike underwater world accessible only to divers like (eventually) Anna:

On the last of the ladder’s fourteen rungs, she paused to increase her air supply. Sure enough: the [diving] dress inflated slightly, easing the water’s pressure on her legs. She felt for the descending line, swung her left leg around its manila cord, and let it slide through her left glove as she drifted down, the weight of the dress lulling her toward the bottom, the water darkening as she left the surface behind. At last her shoes met the bottom of Wallabout Bay. Anna couldn’t see it: just the wisps of her legs disappearing into dark. She felt a rush of well-being whose source was not instantly clear. Then she realized: the pain of the dress had vanished. The air pressure from within it was just enough to balance the pressure from outside while maintaining negative buoyancy. . . . She found herself smiling.

I found all of this material really interesting, and Egan’s writing is elegant without being mannered, full but also fast-paced: it drew me right along. I read with consistent curiosity, too, about what would happen with her cast of characters, who all have enough complexity to keep their next moves unpredictable and enough humanity to make me care about them. Anna in particular is an easy heroine to root for: smart, tough, daring, but emotionally bruised by her father Eddie’s unexplained disappearance, which we know much sooner than she does is somehow the result of his connection with Dexter Styles. 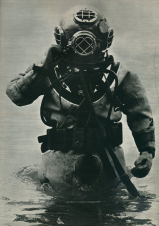 Though there’s some mystery around Eddie Kerrigan’s fate, Manhattan Beach isn’t really built as a mystery novel; its gangster elements add suspense and occasionally give it twists like a thriller’s, but I thought it was really a novel of character, or rather of characters–tangled, most of them, in circumstances they are trying (with very mixed success) to change. The ruthlessness of the gangster story line is tinged with unexpected pathos, and Anna’s pursuit of work below the surface of the sea she has always loved to watch is both a professional and a personal quest that connects (in ways she eventually learns) to her father’s story, as if she has been unconsciously drawn all her life to the one place she might find answers.

By the end, though, I thought the novel’s dense atmosphere somewhat overwhelmed its interconnected plots. Though there’s a nice fitness to some of the twists the stories take, I don’t have much sense of what it all added up to. Though it is unified artistically around motifs of drowning, diving, and rising from the deeps (literally as well as metaphorically), I’m not sure its elements converge on any particular idea or vision of the world. They don’t need to, of course, for Manhattan Beach to be a good novel, but for me a great novel goes that step further, providing not just effective plot, characters, and setting but also in some way a revelation. The ending of Manhattan Beach is not revelatory: in fact, I found it a bit sentimental and also a bit too pat. Still, overall I liked the novel a lot and read it with pleasure.