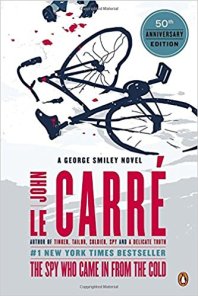 “What do you think spies are: priests, saints, and martyrs? They’re a squalid procession of vain fools, traitors, too, yes . . .  . They don’t proselytise; they don’t stand in pulpits or on party platforms and tell us to fight for Peace or for God or whatever it is. They’re the poor sods who try to keep the preachers from blowing each other sky high.”

Remember when I said that you’d hear about it if I got really excited about another book before the end of the year? Well, here I am: all fired up about John Le Carré’s The Spy Who Came In From the Cold!

I’m very late to the Le Carré party, of course, though I’ve read a fair amount about Le Carré over the years; it was this excellent recent piece in the New York Review of Books that finally convinced me to try him for myself. As a result I knew, or thought I knew, more or less what the book’s atmosphere would be–cynical, murky, morally ambiguous–and, if very approximately, what its plot would be–lies, secrets, betrayals, morally compromising means to equivocal ends. I suspect that the (presumed) familiarity of the books was one reason I felt indifferent for so long to actually reading them.

The Spy Who Came In From the Cold lived up to my preconceptions: it is every bit as grim, every bit as grey, every bit as intricate as I expected. In its atmosphere, and in the nature (though not the specifics) of its plot, it did not surprise me at all. What did surprise me–precisely because I thought I knew so well what I was getting into–is how good it was. It’s not that I hadn’t heard that about Le Carré too, but lots of people praise and admire books I don’t end up gripped by: what Henry James called the “ultimate test”  (“‘liking’ a work of art or not liking it”) can only be administered personally, and the results are always unpredictable.

So that, for me, was the surprise: that The Spy Who Came In From the Cold not only passed that test for me but passed it so swiftly and so convincingly–and I’m told it is not even Le Carré’s best novel! I liked Leamas, tired, angry, but unbroken; I liked the cold and the darkness and the small rooms and the terse conversations; I liked (meaning I was appropriately chilled by) the ruthlessness the work requires, and I liked even more the novel’s running commentary, mostly implicit but sometimes out loud, about its human costs. “We have to live without sympathy, don’t we?” Control asks Leamas as he makes the opening moves in the game Leamas will end up playing to its bittersweet ending:

“That’s impossible of course. We act it to one another, all this hardness; but we aren’t like that really, I mean . . . one can’t be out in the cold all the time; one has to come in from the cold . . . d’you see what I mean?”

I liked Le Carré’s prose, which is economical but at the same time rich with evocative details and a strange sort of yearning:

There was a girl standing on the beach throwing bread to the seagulls. Her back was turned to him. The sea wind played with her long black hair and pulled at her coat, making an arc of her body, like a bow strung towards the sea. He knew what it was then that Liz had given him; the thing that he would have to go back and find if he ever got home to England: it was the caring about little things–the faith in ordinary life; the simplicity that made you break up a bit of bread into a paper bag, walk down to the beach, and throw it to the gulls. It was this respect for triviality which he had never been allowed to possess; whether it was bread for the seagulls or love, whatever it was he would go back and find it; he would make Liz find it for him. A week, two weeks perhaps, and he would be home.

I wasn’t sure I would find spy plots interesting: this is another reason I haven’t read Le Carré until now. In some ways the plot of The Spy Who Came In From the Cold was the least interesting aspect of the book for me: just as I read most mysteries without trying to figure out the murderer before I’m told, I didn’t exert myself much to anticipate the twists the story took. It was clear in practice what I already knew in theory: that Le Carré uses his plots as vehicles for character, and for their potential to explore moral problems, including (as he says in his introduction to my edition) “the same old question that we are asking ourselves fifty years later: How far can we go in the rightful defence of our Western values without abandoning them along the way?” “London won–that’s the point,” Leamas says near the end, refusing the hard, perhaps impossible, work of deciding whether the end justified the means. But he knows there is another way to do the calculation, that there are other measures of winning and losing, and that is surely why he makes his final decision to come in, once and for all, out of the cold.

4 thoughts on ““A Squalid Procession”: John Le Carré, The Spy Who Came In From the Cold”