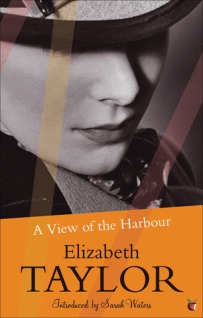 Seen from afar, the lighthouse merely struck deft blows at the darkness, but to anyone standing under the shelter of its whitewashed walls a deeper sense of mystery was invoked: the light remained longer, it seemed, and spread wider, indicating greater ranges of darkness and deeper wonders hidden in that darkness.

Views are a great subject for a novel, because they are always already metaphorical. “After all,” comments Will Ladislaw to his artist friend Naumann in Middlemarch, “the true seeing is within.” “I have a view, I have a view!” exclaims Mr. Emerson in A Room with a View; then, “This is my son; his name’s George. He has a view too.” What they see is not just Florence but “courage and love.”

Elizabeth Taylor’s A View of the Harbour (1947) also makes the most of the literary slippages possible between literal and metaphorical views. On one level it is a novel about people who share a particular view, looking out across a small harbour where the waves slap against the shore, and against the sides of the fishing trawlers that come and go. Their homes, shops, and businesses, in their turn, are the view for the men on those boats.

A View of the Harbour is very much about this setting: the literal view of the harbour is the surface of the novel, though Taylor’s rendering of it is anything but superficial. A View of the Harbour is set just after the war, and the war’s effects permeate the town and the lives of its residents in many ways, from the fragments of sunken wrecks that the fishermen’s nets dredge up, to the lost loved ones whose absences stunt the lives of their survivors. There’s an air of stoic shabbiness about the whole place, too, a kind of worn out fortitude. “When I was young it was so different,” says Tory Foyle, now a divorcée delicately balancing her bitterness against her ex-husband against her infatuation with her best friend’s husband:

Or, to look back upon, it was–a perpetual summer, like all those plays with young men in blazers coming through french windows–so many of them and all the same. It always seemed to be the week-end.

Within a few pages of the novel, Taylor has deftly introduced us to a cluster of the small town’s residents, including Tory and her novelist friend Beth Cazabon, and set in motion the small movements that over the course of the novel will gather intensity until by the end they crest and break, their energy dissipating, like the waves. Moving among them is one outsider, Bertram Hemingway, a visiting would-be artist who gradually moves from observing to participating in the subtle human dramas unfolding around him. Watching over them is Mrs Bracey, once a key player in the town but now an invalid whose acidity is somewhat tempered when she decides to have her bed relocated upstairs. From there she will once again be able to look out over the harbour “which had been a grey and white, remembered, half-imagined scene for so long”:

She wanted to watch the great dappled waves riding in to the foot of the cliffs, breaking and crumbling and scurrying back in confusion, to be conscious of the pulse of the lighthouse, to see once more visitors with folded raincoats stepping into rowing boats named Nancy or Marigold or Adeline; the moving water, the sauntering people, the changing sky, the wrinkled moonlight on the sea, and fishermen, coming out of the anchor on Saturday nights, standing round the lamp-post singing Sweet Genevieve.

She does see the scenery again, but the scenes of greater interest to her prurient curiosity are those played out by people she knows. And she’s not the only one watching from a window–or looking towards a window, including hers. As Sarah Waters remarks in her introduction to my Virago edition, “Taylor’s fascination here is with the perils and the pleasures of perspective. This is a novel in which people watch each other.” 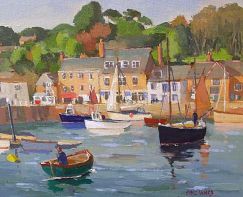 A View of the Harbour is intricately constructed, all of its interconnected stories moving a little piece at a time, paths crossing, perspectives changing, the lights brightening or fading as the characters move in and out of the foreground. It is easy to imagine many of the incidents as framed tableaux, caught by an artist’s eye so that a moment of intimacy takes on the character of a broader revelation. Unsurprisingly, it’s often Bertram, the designated artist, who makes this potential explicit:

He sat on the edge of his bed and imagined the picture he was going to paint–the harbour buildings seen across the harbour water, the crumbling texture of plastered walls, the roofs of purple, of grey-blue, the grey church on the shoulders of the other buildings, the green weed on steps and the sides of the harbour-wall, silk-fine and damp like the hair of the newly-born–all the different surfaces and substances, the true being of it coming luminously through the essence of such a scene.

He is not a very good painter; perhaps, Taylor seems to suggest, and he himself seems to realize, his artistic deficiency is, paradoxically, what makes him such a good observer–or perhaps it’s that he is too nice a man to ignore what he sees around him, and thus he lacks the self-absorption necessary for greatness. He takes an interest in real people, and thus cannot achieve the sublime perspective needed to transcend their ordinariness, or their commonplace surroundings, and raise them to the level of art. Bertram is probably a better man for it, but his paintings are not worth much except as mementos of time passed.

An interesting complement to Bertram is Beth Cazabon, who is often so lost in the lives of her characters that she struggles to stay connected to the lives of her children, or her husband–which is a blessing insofar as she remains oblivious to his infidelity. Beth (and thus also, by implication, Taylor) is only too aware that this preoccupation with fiction is not altogether to the benefit of the author or her real-life friends and family, and that it also may mean little to posterity–Beth has no pretensions about the lasting value of her work. “I’m not a great writer,” she reflects;

Whatever I do someone else has always done it before, and better. In ten years’ time no one will remember this book, the libraries will have sold off all their grubby copies of it second-hand and the rest will have fallen to pieces, gone to dust. And, even if I were one of the great ones, who, in the long run, cares? People walk about the streets and it is all the same to them if the novels of Henry James were never written. They could not easily care less. No one asks us to write. If we stop, who will implore us to go on? The only goodness that will ever come out of it is surely this moment now, wondering if “vague” will do better than “faint,” or “faint” than “vague,” and what to follow; putting one word alongside another, like matching silks, a sort of game.

It seems at once ironic and apt, then, that the greatest pleasures of this novel are due to its novelist, to her uncannily precise choice of words and her ability to place them alongside each other so that they constantly delight and surprise. She shows us these commonplace people and their straggling lives–and also their landscape, with its roughness and its manmade debris but also its timeless beauty–with paradoxically ruthless grace.

5 thoughts on ““Deeper Wonders Hidden”: Elizabeth Taylor, A View of the Harbour”