I could no longer see her but I called out to Queenie as an MP, his baton thrusting hard into my chest, his face pressing close to mine, hot breath breaching my cheek delivered the words ‘Get away from her, nigger.’ Only now did I experience the searing pain of this fight — and not from the grazing on my face or the wrench in my shoulder. Arthur Bligh had become another casualty of war — but come, tell me, someone . . . which war?

I don’t know what intuition led me to pick Andrea Levy’s Small Island as my first book to read after the U.S. election, but it was a good one. Levy’s novel is not about contemporary America: it is set in Britain in 1948 (and, through flashbacks, in Jamaica and Britain and, briefly, India and America before and during the war). The stories it tells, however, are about similar problems of change and resistance, of expectation and misunderstanding, of difference and hostility. It is also the kind of storytelling that I think a lot of us believe can help, not to solve, but at least to ease the tensions (maybe even the violence) these feelings create. Why? Because it explores with clear-eyed tenderness the experiences of very different people trying to live together.

Small Island focuses on two couples: the English Bernard and Queenie Bligh and the Jamaican Gilbert and Hortense Joseph. It opens as Hortense arrives in London in 1948 to join Gilbert in the small room he has rented in Queenie’s house in Earl’s Court. Out of Hortense’s intense disappointment in these shabby quarters unspools the story of her upbringing, her training as a teacher in Jamaica, and her investment in Gilbert, demobbed from the RAF and dreaming of a new life in England. We also learn Gilbert’s history, including his education in racism during his RAF training. It’s while he’s stationed in Lincolnshire that he first meets Queenie. While her husband Bernard is serving overseas, Queenie is looking after her father-in-law, Arthur, who is still severely affected by his service in WWI. One day, in his confusion, Arthur wanders away from home and is found and returned by Gilbert. Gilbert strikes up a friendship with Queenie, a relationship which eventually sparks anger from  the American G.I.s in the area even though, as Gilbert angrily points out to a theater usher who tries to steer him to the back row, “there is no Jim Crow in this country.” 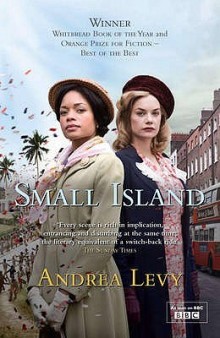 Though it’s only in America (or on American bases) that segregation is an explicit policy, Gilbert learns that his own loyalty to the British Empire is no defense against the equally pervasive racism of “the mother country.” Despite this discouragement, after the war Gilbert finds Jamaica too small for his dreams and yearns to return to England, which with Hortense’s collaboration he eventually does. His war service does nothing to earn him a welcome, however, and he has trouble even finding lodgings until he remembers Queenie’s London address. With Bernard still missing, Queenie has begun taking in lodgers herself to make ends meet, and Gilbert takes up residence in her house. Queenie’s experiences during the Blitz make up another thread of the novel, as does Bernard’s war experience and then his posting to Calcutta during the harrowing violence between Muslims and Hindus in 1946. All of these story lines come together when Bernard finally shows up again in Earl’s Court and our four protagonists end up under the same roof — but hardly, in any way that matters, in the same place.

Levy does a good job making these disparate stories, each of which is told in its protagonists’ own distinct first-person narration, vivid and convincing.  In doing so, she helps us see larger social changes — brought about in part by the war but also by the more abstract forces of modernization and globalization — as very personal things: lives change often faster than people do, and the result is liberation, sometimes, but also disorientation, resentment, and conflict. Good intentions aren’t enough to smooth the way forward any more than either covert or outright opposition to the new or the different is enough to stop them. It’s easy to sympathize with Gilbert and Hortense, and to wish the best for Queenie, as they try to build on their common ground. But Bernard — who is horrified to come home at last and find “coloureds” in his house — is a much harder case. I was interested to read Levy’s comments about this in the author Q&A at the end of the book. “When I created Bernard,” she says,

it was important for me to really understand why he was the way he was. He’d been brought up to see the world, and his place in the world, in a certain way. When that world started to change and his position is challenged, he responded in the only way he knew — by asserting his sense of superiority. I never wanted readers to see him as an evil man — misguided, foolish, bigoted, and stubborn maybe.

That call for understanding sounds familiar right now, doesn’t it? It’s something a lot of people are arguing about Trump supporters: that their embrace of a candidate whose attitudes and policies are openly racist, sexist, and xenophobic demands explanation, not (or not just) condemnation. No doubt that’s true for pragmatic reasons, but it seems important that explaining not shade into excusing — and I notice that Levy still calls Bernard a bigot, and that the novel as a whole is clearly pitched against his narrow-minded anger.

Though Small Island is not naively optimistic about progress, there are signs of hope, including faint glimmers of humanity in Bernard. When progress is made, it’s when people are startled out of their “certain ways” of seeing the world into realizations about how other people see and experience it. What Bernard needs most of all is something like Small Island itself: stories about people he struggles to recognize as equally human that make their humanity real to him. Gilbert tries to explain it to him in principle:

You know what your trouble is, man? Your white skin. You think it makes you better than me. You think it give you the right to lord it over a black man. But you know what it make you? You wan’ know what your white skin make you, man? It make you white. That is all, man. White. No better, no worse than me — just white. . . Listen to me, man, we both just finish fighting a war — a bloody war — for the better world we wan’ see. And on the same side — you and me. . . . But still, after all that we suffer together, you wan’ tell me I am worthless and you are not. Am I to be the servant and you are the master for all time? No. Stop this, man. Stop it now. We can work together, Mr. Bligh. You no see? We must. Or else you just gonna fight me till the end?

Bernard claims that he literally “can’t understand a single word,” but of course the problem is more than just the Jamaican cadence of Gilbert’s language. Gilbert is asking him to see the world in a completely different way, to enlist in a completely different war than the one he thought he’d been fighting. This is the work that a novel like Small Island helps with: it provides alternative stories, it shows the world from a different perspective. The problem is that Bernard, the one who needs this insight the most, is the one least likely or able to engage in the necessary imaginative effort, and as a result all the labor of sympathy is on the other side: “And hear this,” Gilbert says after Bernard has attacked him, “soft-hearted man that I am, I go to help him up. For suddenly pity for him flowed over me like a wave. . . . But he thrust my hand away.”

I’m reading The Mill on the Floss as well as Middlemarch right now for my classes. As I’ve often written about, I find Eliot’s doctrine of sympathy very beautiful and important. But, as I have also written about, there’s something potentially worrisome about her moral imperatives. In The Mill on the Floss, for instance, her narrator observes that “the responsibility of tolerance lies with those who have the wider vision.” As I watch both hate and fear spreading after Trump’s victory, I find this doctrine hard to embrace, because it seems to give a free pass to the less tolerant, to the less empathetic — to the bigots, to the Bernards — as if they don’t have an equal obligation, or an equivalent capacity, to understand other points of view. I’d feel more motivated right now to understand the Bernards of the world if they gave any sign of trying to understand the people they villify, terrify, and horrify.

One thought on ““Which War?” Andrea Levy, Small Island”