I started reading Rebecca West’s Black Lamb and Grey Falcon four years ago. I’m still reading it – or, more accurately, I am reading it again. I didn’t stop reading it then because it was no good or I wasn’t interested. On the contrary, I was fascinated and endlessly impressed. But the very thing that so fascinated and impressed me – the astonishing density and rhetorical brilliance of West’s individual sentences – made it very slow reading, and at nearly 1200 pages it’s also, quite literally, very heavy reading. I didn’t consciously decide to stop reading it. I just set it down and read something else for a while, and somehow that “while” turned into four years.

Here I am again, though, back at it. A summer of mostly not very excellent books had made me a bit restless intellectually, and suddenly the remaining 900 pages of Black Lamb and Grey Falcon seemed really inviting. Since picking it up again last weekend I’ve read another 300 pages — not much, really, in almost 10 days. It’s just not the kind of book you skim through, though: there’s no basic plot, no simple gist, that you could grasp if you did that. It’s also not clear how much value the book would have if you were able to reduce it, somehow, to a skeletal level. It is not an authoritative history of the Balkans, for example, though it is, in part, an exposition of and meditation on the history of the Balkans. It is not a colorful travel narrative about the former Yugoslavia, though it is, in part, a rich and sometimes riveting account of traveling there. It is not a political analysis of the rise of fascism — though it moves in those shadows and thus shows its readers the horrors that lurk in them. (One footnote is particularly chilling in its brevity: “I was about to discover the reason for this from a Viennese historian,” West says about a small point of historical interest, “when the Anschluss came, and there was silence.”) 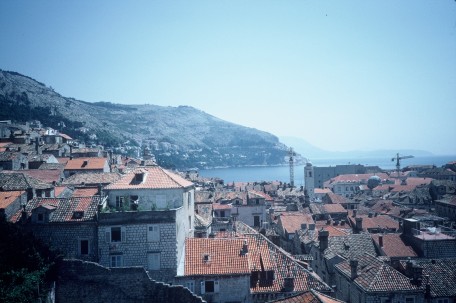 Now that I’m almost half way through the book, I am still impressed above all by West’s writing. In his introduction, Christopher Hitchens (after acknowledging some of the idiosyncrasies and problems of West’s commentary on the world she was exploring) concludes that “writing on this level must be esteemed and shown to later generations, no matter what the subject.” I’m not sure that quality of prose (even if we had a 100% reliable and universal measure for it) is or should always be a sufficient condition for reading something. One of the challenges of Black Lamb and Grey Falcon for me is that it is so vast and complex that I doubt my own ability, even when I finally finish it, to evaluate its worth on other grounds, though. At this point I do feel some frustration, in fact, at being so immersed in details and yet still so unable to perceive, never mind assess, larger patterns.

I may never see the forest for the trees, or perhaps by the time I read the Epilogue (which Hitchens describes as “ice-cold but white-hot”) I will have traveled with West at least to her conclusions, and then I can look around for other perspectives on them. In the meantime, here are a few more samples that show, again, the rhythm of her thinking and writing, pulsing between the specific observation and the perceived implication:

What is the use of ascribing any catastrophe to nature? Nearly always man’s inherent malignity comes in and uses the opportunity it offers to create a greater catastrophe.

It is a glorious story, yet a sad one. What humanity could do if it could but have a fair course to run, if fire and pestilence did not gird our steps and earthquakes engulf them, if man did not match his creativeness with evil that casts down and destroys!

Like all other material experiences, sex has no value other than what the spirit assesses; and the spirit is obstinately influenced in its calculation by its preference for freedom.

The more one knows about the [Sarajevo] attentat the more incomprehensible it becomes. It shows also that moral judgment sets itself an impossible task. But when the Bosnians chose life, and murdered Franz Ferdinand, they chose death, for the French and Germans and English, and if the French and Germans and English had been able to choose life they would have chosen death for the Bosnians. The sum will not add up. It is madness to wrack our brains over this sum. But there is nothing else we can do except try to add up this sum.

These wreaths [laid at the Monument to the Unknown Soldier] were displeasing in any case because they were official, and had been ordered by preoccupied functionaries and supplied as articles of commerce for a minor state occasion that would provoke no wave of real feeling in the people, but their provenance reminded one that the quality of Balkan history, and indeed of all history, is disgusting.

[Mozart’s music] presents a vision of a world where man is no longer the harassed victim of time but accepts its discipline and establishes a harmony with it. This is not a little thing, for our struggle with time is one of our most fundamental conflicts; it holds us back from the achievement and comprehension that should be the justification of our life.

Again history emitted its stench, which was here particularly noisome. Nothing a wolf can do is quite so unpleasant as what can be done to a wolf in zoos and circuses, by those who are assumed not to be wolfish, to be the civilized curators of wolfdom. 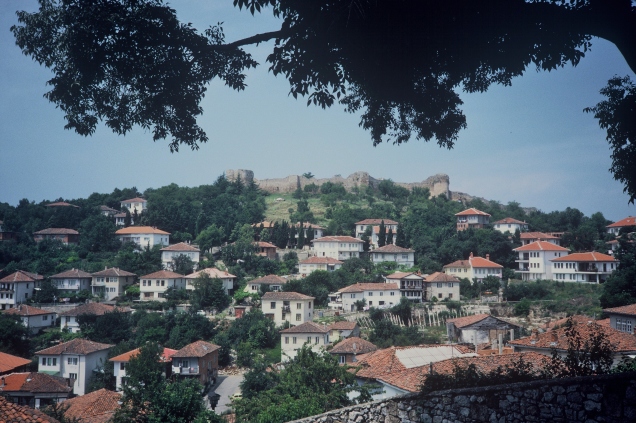 The photos are from my own trip to the former Yugoslavia in 1986.