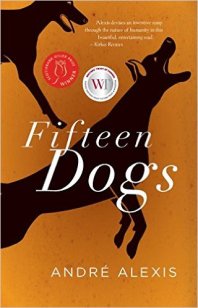 I’m back! It has been quite a week, and I still have work to do to finish up the term, but I can see my way through it now — and really, it hasn’t been that bad compared to terms when I’ve had more or bigger classes and no teaching assistants. Still, it feels good to have everything under control, and thus to be able to contemplate the stacks of books around my desk with anticipation rather than anxiety or guilt. Hang in there, Isabel: you’re next! (Egad, was it really a whole month ago that I started The Portrait of a Lady?)

The one book I have managed to get to the end of recently is Andre Alexis’s Fifteen Dogs, which was my book club’s latest selection. Usually we try to follow some kind of link from one book to the next, but we settled on Fifteen Dogs a bit randomly because a few people had heard about and thought it sounded interesting. A few days after we chose it, it won the Giller Prize, so that seemed like validation! (Coincidentally, it did turn out to resemble Ending Up in one respect: all of its main characters end up the same way Amis’s do.)

I didn’t like Fifteen Dogs. The premise was initially interesting, and I have nothing in principle against adapting old forms (in this case, the apologue) for contemporary use. But Alexis’s choice to write the book in stiltedly formal diction as if to recreate the form’s antiquity really didn’t work for me: to my ear, it just sounded artificial, and it kept me from ever feeling anything about the dogs. Perhaps that was the intent: to keep it intellectual, to give it the (supposed) objectivity of a philosophical exercise. Or perhaps (and equally likely) I just wasn’t the right reader for the book, as at least one other member of my book club said it made her cry.

Was I unmoved by Fifteen Dogs because I’m a cat person and have never been particularly comfortable around dogs, which usually strike me as loud, messy, and intrusive? I wondered about that a lot while I was reading Alexis’s book. I wan’t convinced by his dogs as either dogs or dogs-with-human-consciousness, but I thought that might be because I don’t have an intimate knowledge of what he repeatedly calls “the canine.” I think Alexis does manage not to simply anthropomorphize his dogs once they can think and talk — he works hard to keep them still dog-like (as he understands that) and then to animate the strange hybrid his thought experiment has created. (There’s a pretty funny bit about a dog watching a movie who, despite being otherwise pretty interested in it, gets frustrated that he can’t smell anything in it.) 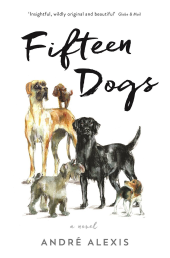 But it turned out that although I am the only person in my book club who doesn’t own (and love) dogs, most of the others also didn’t like the book much. One was offended by it because she loves dogs and thought the book showed Alexis doesn’t actually like them: his version of them is negatively selective, uncharitable, she proposed. The nobility of the dog who waits years for his owner to come back struck a chord with some of the others (though why this dog, in spite of his grasp of human language and motives, never figures out that she has died did bother us). We all agreed with the one who cried that the last dog’s death was very pathetic — but she recently lost her own dog, so she thought she might have also been emotionally vulnerable. I was the only one who had gotten both distracted and annoyed by the weirdly specific allusions to Victorian novels (if you were going to train your preternaturally talented dog to recite just one 19th-century novel, would you choose Vanity Fair? and what is it exactly that makes Mansfield Park the pooch’s preferred Austen?). In general, the complaint was simply that it wasn’t very engaging, though as is often the case, as we talked we found it getting more interesting, at least theoretically: why does the acquisition of language so immediately cause such a deep rift? what is it about poets that makes them both outcasts and – or so Alexis proposes – the only ones likely to find happiness? We had a little fun going through the poems, too, looking for the hidden dog names that we’d missed the first time.

Their tepid response to Fifteen Dogs notwithstanding, there’s no doubt that I was surrounded by dog lovers, and the book prompted some impassioned discussion of their dogs, which naturally made me feel both left out and a bit defensive. I have met some individual dogs over the years that I’m fine with, and every once in a while I think it might be nice to be met with panting enthusiasm when I come home from work, but really, if getting a pet were an option for me, I’d absolutely get a cat, not a dog. As a child, I longed for a cat above all things, but my father and both siblings are allergic, so it always seemed like an impossible dream. Then on Christmas Day in 1977, a mysterious basket was delivered that seemed to be making a sad mewling noise — and inside was an absolutely beautiful seal point Siamese kitten. This very old and sadly discolored photo shows us on our very first day together: 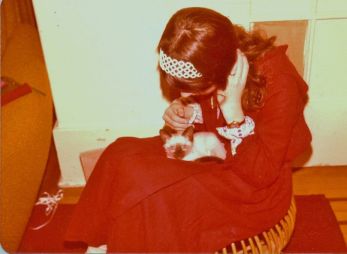 I was at once completely in love and completely petrified! And I was deep into my Mary, Queen of Scots phase, so I named him “Bothwell,” an aristocratic title he quickly grew into:

Bothwell was a truly splendid cat: smart, elegant, expressive, loyal. In retrospect, I wasn’t the greatest owner: I didn’t clean out the litter box as often as I should have, and sometimes I just dumped new food in without cleaning out his bowl. But he was definitely mine — or, since cats do tend to resist being possessed, he was definitely my friend more than anyone else’s. I spent many hours reading in my comfy chair with him curled on my lap, and when I wasn’t in the chair, he kept it warm for me: 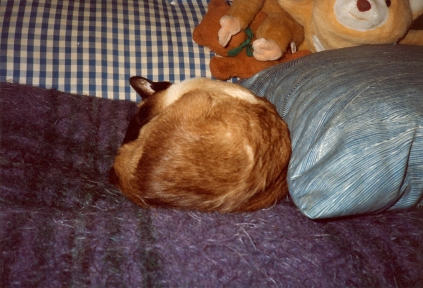 When I moved into my first apartment, the hardest part was not being able to bring him with me; I was at Cornell when he died, and though it had been a few years at that point since I’d lived with him, I felt completely bereft. 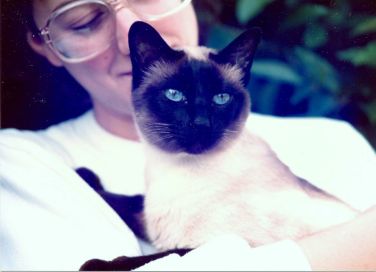 My husband is allergic to cats; I wouldn’t be surprised if my children were too. So it seems unlikely I’ll ever get another one: I’m back where I was long ago, dreaming of the perfect feline companion!

After reading Fifteen Dogs, I thought my book club might want to try a different dog book, so I looked around for possibilities and there are lots of them. In the end, we went a different way (in fact, we went back to Kingsley Amis to find our thread, and chose Elizabeth Jane Howard’s The Beautiful Visit). But my search got me wondering what the great cat novels are. I got a number of good suggestions on Twitter including May Sarton’s The Fur Person, Takashi Haraide’s The Guest Cat, Paula Fox’s Desperate Characters, and Natsume Soseki’s I Am a Cat. Maybe I can talk all those dog lovers into reading one of these soon: fair’s fair! In the meantime, it’s probably time I read “The Cat That Walked By Himself.”

Update: I realized right after I published this that I have posted about cats once before: see here for my daughter’s memorable poem CATS.

9 thoughts on “Dogs and Cats”

Leave a Reply to Bill from PA Cancel reply