Anne sought in the folds of her skirt for the gold-handled scissors hanging from her belt. Deftly she snipped off the fattest grape of all and popped it into his watering mouth. He savored it greedily and, after a furtive glance across the room, squeezed her hand with the obscene slyness of an old man who has lived lustily.

“The pick of the bunch!” he said. And the faded eyes that blinked up at her from beneath his sandy lashes were full of fun and affection.

“How kind of you to bring grapes!” exclaimed Kate, bustling forward with a glass of medicine.

She thought they were discussing the fruit. But Anne knew he was teasing her. He might equally well have been discussing his wives. . . .

She felt sure he had been speaking her epitaph; and a flood of long-delayed triumph shot through her, warm as wine. She wasn’t ravishing like Nan Boleyn, nor the mother of his son like Jane, nor yet his ‘rose without a thorn’ — but at least he had admitted his mistake and tried to make amends for calling her a Flanders mare.

I wasn’t quite up to reading another installment of ‘The House of Niccolo‘ right away, but I also didn’t feel like going straight from Dunnett to some slick contemporary novel, so in the end what I plucked from my shelf was some vintage historical fiction, Margaret Campbell Barnes’s My Lady of Cleves. I never read Barnes as avidly as I read Jean Plaidy, but a couple of her novels were steadfast favorites, including Mary of Carisbrooke and Brief Gaudy Hour, her Anne Boleyn novel. I always loved My Lady of Cleves especially, though, so I was very happy a few years ago to find I could replace my crumbling library discard copy with an elegant new edition. (The pretty cover does have the odd design problem that Steve Donoghue noted is strangely prevalent in Tudor fiction, though.) 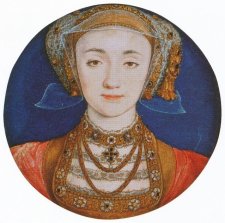 My Lady of Cleves is much less ambitious than any of Dunnett’s novels: it is historical fiction as domestic drama, with no pretensions to theories or philosophies about the rise and fall of nations or faiths or civilizations. It is, as a result, much easier reading — and easier writing too, no doubt! Its premise is simple and sweet: that Holbein’s exquisite portraits of Anne, including the miniature that (mis)led Henry VIII into choosing her for his fourth wife, are evidence of a hidden love story between the great artist and his unprepossessing subject. How else, after all, to explain the mismatch between the beauty of his work and the reality of the woman Henry so contemptuously cast aside? Holbein must have seen something his king — coarse, lusty, spoiled — could not, and that something is what the novel creates for us: a woman of quiet dignity, but also strong feeling, held carefully in reserve, a woman who would — if things had gone differently — have made a good, perhaps even a great, queen, but who missed, or was spared, that fate.

Barnes is not a great stylist, and some moments struck me as particularly wooden on this reading. But she does a consistently nice job sketching in period details, lavishing them particularly on the homes and gardens of her characters, from the castle in Cleves with its “comfortable pepper-pot turrets” to Anne’s eventual home at Richmond. (The descriptions of Hampton Court brought back happy memories of my visit there a few years ago: it lived in my imagination for so long that actually being there is both surreal and thrilling.) “Nowhere had she seen such gracious houses as these wealthy English possessed,” Anne reflects:

Golden bars of sunlight lay across the floor, flecked here and there with gems of color reflected from armorial bearings on the casements of the three long oriel windows. On the wall facing them a tapestry in russet and green held all the living loveliness of an autumn wood through which a lordly stag picked its way with timid grace. . . . There were beautiful pieces of furniture designed for comfort and a great painted globe of the world. On a long refectory table which looked as though it might have been filched from some splendid monastery were gathered a pewter ink well holding a flamboyant quill, white sheets of music scored with square black blobs of notes, and a priceless collection of queerly shaped musical instruments of which Anne didn’t even know the names. Everywhere were books and maps and signs of lively culture. Her father had plenty of books but most of them were chained to gloomy desks, not scattered about family rooms so that the sunlight could wink cheerfully on their metal clasps. Only these Tudors, it seemed, understood the art of living.

It’s “these Tudors,” the “tempestuous Tudors,” as Anne often thinks of them, that dominate Anne’s new life. Henry, in particular, overwhelms the novel whenever he’s present, which seems apt: “he would have filled the center of our stage anyhow,” his friend Charles Brandon tells Anne, “even if he’d been a commoner’s son. Some people have that kind of flame in them.” It’s unexpected, perhaps, in a novel about Henry’s rejected queen, that she and therefore we eventually come to see Henry sympathetically. Anne initially sees him, literally, as a caricature, as Holbein draws him for her, square, with “arched brows” and a “little pursed mouth.” When she first meets him in person, she is struck by how much he resembles Holbein’s uncharitable sketch; shamed and hurt by his humiliating treatment of her, she continues to see him in two dimensions, with understandably little inclination to seek out or acknowledge his other dimensions. Once freed of their embarrassing failed marriage, though, she regains her equanimity and feels compassion and even admiration for facets of his character that offset, if they don’t excuse, his ruthlessness, egotism, and greed.

But it’s Anne who, rightly, holds first place in the novel overall. Barnes makes the lack of dramatic incident in Anne’s life itself dramatic: with the ghost of Anne Boleyn behind her and the tragic spectacle of young Katherine Howard’s fall before her, her relative tranquility seems precious, even if it is maintained through the sacrifice of her most passionate yearnings. I have no idea how much of Barnes’s portrait is based on historical records: her author’s note says that all the comments in the novel about Anne “were in fact made by people who knew and saw her,” but how much we know about Anne herself, as a woman, or about the details of her life before, during, or after her life-changing marriage is beyond my scope. What Barnes does so well, though, is make me believe in her version of Anne: it’s as if (and I know this sounds cliched) the poised woman in the portrait has stepped out of it into the novel.

It’s a story, too, built on the possibility of solitary contentment — not that Anne is altogether alone, but that the happiness she finds turns on her ability to make her own life meaningful, without romance, marriage, or children of her own. Condemned to live on the periphery of the court she gave up so much to join, she manages, in Barnes’s version, to make her modest place in history seem like a noble one. Nice as it would have been for the story to have a more conventional happy ending, there’s still something comforting about that.