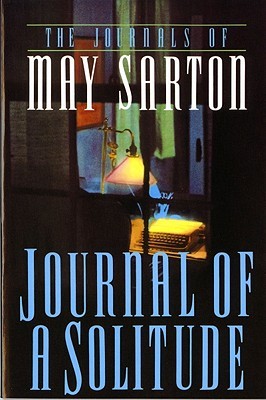 “Plant Dreaming Deep has brought me many friends,” says May Sarton early in Journal of a Solitude, “…but I have begun to realize that, without my intention, that book gives a false view.” She worried that she had given an overly idealistic picture of her life alone in her restored New Hampshire farmhouse, which she describes in Plant Dreaming Deep with such joyous lyricism: “the anguish of my life here — its rages — is hardly mentioned.” She wrote Journal of a Solitude as a counterweight:

Now I hope to break through into the rough rocky depths, to the matrix itself. There is violence there and anger never resolved. . . . I go up to Heaven and down to Hell in an hour, and keep alive only by imposing upon myself inexorable routines.

She kept this journal for a year and recorded both those heights and those depths.

I’m definitely among those who were won over by Plant Dreaming Deep. As I said in the comments on my post on it, though, I didn’t find it idealizing: in the post itself I wrote, “Sarton’s story here is not of uninhibited bliss: there’s guilt and anxiety, as already mentioned, but also fear, hard work, and constant demands on her self-reliance.” Still, Journal of a Solitude did seem darker and more fretful. Days may begin well but often end in tears; friends are welcome but their departure is a relief; traveling is less invigorating than exhausting: “I armed myself in patience and before I finally got back here, I needed it.” Her solitary home is a refuge from the pressures of the external world, but often provides insufficient distractions or buffers against inner turmoil:

I woke in tears this morning. I wonder whether it is possible at nearly sixty to change oneself radically. Can I learn to control resentment and hostility, the ambivalence, born somewhere far below the conscious level? If I cannot, I shall lose the person I love. There is nothing to be done but go ahead with life moment by moment and hour by hour — put out birdseed, tidy the rooms, try to create order and peace around me even if I canot achieve it inside me.

But while there are tears and rages and fits of intense, frustrated depression, her emotional life is not one deep trough. Her garden especially brings her pleasure, and here, as in Plant Dreaming Deep, she writes about it, and the flowers it yields, with pungent vividness:

A gray day . . . but, strangely enough, a gray day makes the bunches of daffodils in the house have a particular radiance, a kind of white light. From my bed this morning I could look through at a bunch in the big room, in that old Dutch blue-and-white drug jar, and they glowed. I went out before seven in my pajamas, because it looked like rain, and picked a sampler of twenty-five different varieties. It was worth getting up early, because the first thing I saw was a scarlet tanager a few feet away on a lilac bush–stupendous sight! There is no scarlet so vivid, no black so black.

You almost want to finish her paragraph with “ah–bright wings!”

While I didn’t really find Journal of a Solitude that different or that much darker than Plant Dreaming Deep, I did find it more episodic and fragmented, perhaps because the earlier journal tells the story of her finding, fixing, and learning to live in her New Hampshire home, while this one does not have as clear a narrative arc. It does turn out to be about a particular turning point in her life — or at least it covers what turns out to be a turning point, namely her decision to move away from the farmhouse and into a house on the Maine coast. This is a development that occurs fairly far along, however, an opportunity that seems to arise more or less out of the blue, so it’s not as if it is written as a farewell to Nelson.

Life rarely has the coherence of fiction, however, and journals especially — written, as they are, in the moment — can hardly be expected to anticipate or be structured around patterns that will emerge only in the future. That’s a luxury for memoir or biography. Simply as a record of Sarton’s experiences and responses to them, Journal of a Solitude had plenty to interest me. For instance, it’s during this year that she first meets Carolyn Heilbrun, whose essay on Sarton I refer to in my post on Plant Dreaming Deep. I enjoyed seeing the relationship from the other side. With her letter of introduction, Heilbrun sends Sarton some reprints of her articles. “I dived into one on Bloomsbury at once,” says Sarton, who “knew Virginia Woolf slightly.” I can’t resist quoting extensively from her remarks on Woolf, not least because they end up at what is still a familiar place:

What a relief to find an essay that neither sneers at nor disparages Virginia Woolf! The sheer vital energy of the Woolfs always astonishes me when I stop to consider what they accomplished on any given day. Fragile she may have been, living on the edge of psychic disturbance, but think what she managed to do nonetheless — not only the novels (every one a break-through in form), but all those essays and reviews, all the work of the Hogarth Press, not only reading mss. and editing, but, at least at the start, packing the books to go out! And besides all that, they lived such an intense social life. (When I went there for tea, they were always going out for dinner and often to a party later on.) The gaity and fun of it all, the huge sense of life!  . . .

It is painful that such genius should evoke such mean-spirited response at present. Is genius so common that we can afford to brush it aside? What does it matter whether she is major or minor, whether she imitated Joyce (I believe she did not), whether her genius was a limited one, limited by class? What remains true is that one cannot pick up a single one of her books and read a page without feeling more alive. If art is not to be life-enhancing, what is it to be? Half the world is feminine — why is there resentment at a female-oriented art? . . . Women certainly learn a lot from books oriented towards the masculine world. Why is not the reverse also true?

These comments resonate in the journal itself partly because Sarton struggles very hard during this period with her own status as a writer. The entry immediately following records her devastated response to “an annihilating review in the Sunday Times,” which continues to pain her in her low moments:

What a lonely business it is . . . from the long hours of uncertainty, anxiety, and terrible effort while writing such a long book, to the wild hopes (for it looked like a possible best seller, and the Digest has it for their condensed books) and the inevitable disaster at the end. I have had many good reviews and cannot really complain about that. What I have not had is the respect due what is now a considerable opus. I am way outside somewhere in the wilderness. And it has been a long time of being in the wilderness. But I would be crazy if I didn’t believe that I deserved better, and that eventually it will come out right. The alternative is suicide and I’m not about to indulge in that fantasy of revenge.

But she can be turned aside even from these dark thoughts by a glimpse of the sky: “Somehow the great clouds made the day all right, a gift of splendor as they sailed over our heads.”

2 thoughts on ““The Rough Rocky Depths”: May Sarton’s Journal of a Solitude”