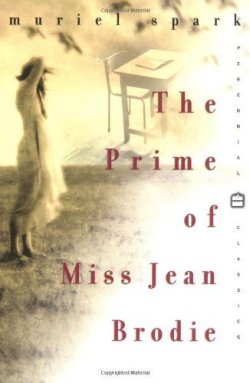 I very much enjoyed reading this novel. And yet I felt as if I understood better what it was about than why it was written as it was. Miss Jean Brodie is a fabulous character, as charismatic as a creation as she is as a teacher. I can’t disagree with Hal Hager’s effusive remarks in my sleek Harper Perennial Modern Classics edition: “Irrepressible, imperious, and irresistible, she has joined the ranks of those fictional characters who, through the sheer power of their lives on the printed page, endure in memory and in the culture from which they spring.” Long before this meeting with Miss Brodie on the page, I felt I knew her, partly from having seen (though years ago) the film with Maggie Smith, and partly also from the general circulation of lines from the novel: “For those who like that sort of thing, this is the sort of thing they like”; “You are the crème de la crème”; “I am a woman in my prime.”

The novel’s a fascinating study in the problematic allure of charismatic leadership: Miss Brodie’s fascination with fascism (“She had returned from Germany and Austria which were now magnificently organized”; “the German brown-shirts, she said, were exactly the same as the Italian black, only more reliable”) has a comic aspect but is also frighteningly apt, and reflective of her own power over her “set” — though that power proves more wishful or elusive than the forms of authoritarianism she so admires. Miss Brodie is perhaps the agent of her own undoing as a leader, as she fiercely individualizes her girls and preaches the evils of “team spirit” (“phrases like ‘the team spirit’ are always employed to cut across individualism, love and personal loyalties”). It’s no wonder that this tension between leading and following eventually causes the set to implode.

The novel is equally preoccupied with the complications of sexual feelings: repression, desire, speculation, displacement. The girls’ prurient fascination with sex, and especially with Miss Brodie’s sex life (real and imagined), shows how entwined these feelings are with charismatic leadership, I thought: teaching, for instance, is always a kind of seduction, an attempt to win over hearts and minds, and Miss Brodie’s allure holds as long as she (knowingly or not) effectively channels her students’ erotic longings. Once they outgrow her — once they have sexual experience and power of their own, for instance — her grip on them begins to weaken.

There’s lot to think about in Spark’s strange, acerbic novel, lots to be amused and appalled at. But I was disoriented by some aspects of its style: I can’t see yet how they help me appreciate the tangle of emotions and politics and personalities the novel brings together. For instance, why does Spark insist so repetitively on characterization by tagline — there’s Rose (“famous for sex”), Mary (dies in the fire), Monica (mental math and fits of anger),  Eunice (does the splits), Sandy (“small, almost nonexistent eyes”). I appreciate that we need to get them all sorted, and that these are shorthand ways of indicating some fundamental things about them, but why reiterate their tags so incessantly? And why does Spark love prolepsis so? The chronology of the novel as a whole is quite an intricate braid of events from 1933 to 1939, but there’s a constant flitting still further ahead to the girls’ futures, as well as to Miss Brodie’s eventual end. Perhaps it is a way to signal that, intense as the school experience is, it is only a short interlude — or, the other way around, to bring out the lasting effects of early influences? I’d be interested in anyone’s ideas about  unities of form and content! My expectations were very high for this novel, and I’m a bit disappointed that at this point it seems more glittery than brilliant.

6 thoughts on “The Prime of Miss Jean Brodie: The Crème de la Crème?”