If Anna represents the futility of material striving–of seeking lasting happiness through pursuing her own immediate needs–perhaps Levin represents spiritual striving. At any rate, that’s the best I’ve come up with so far as I ponder the relationship between the two major plots of Anna Karenina. In Levin’s epiphanic musings towards the end of the novel, he repeats the words of the peasant Theodore:

To live not for one’s needs but for God! For what God? What could be more senseless than what he said? He said we must not live for our needs–that is, we must not live for what we understand and what attracts us, what we wish for, but must live for something incomprehensible, for God whom nobody can understand or define. Well? And did I not understand those senseless words of Theodore’s? And having understood them, did I doubt their justice? Did I find them stupid, vague, or inexact?

No, I understand him just as he understands them: understood completely and more clearly than I understand anything in life. . . .

Levin’s agnosticism has been a constant up to about this point in the novel. Does he “find” God here, then? It sounds like it:

But now I say that I know the meaning of my life: it is to live for God, for the soul. And that meaning, in spite of its clearness, is mystic and wonderful. And such is the meaning of all existence.

At the end of the chapter, he rejects not just doubt but reason:

Reason has discovered the struggle for existence and the law that I must throttle all those who hinder the satisfaction of my desires. That is the deduction reason makes. But the law of loving others could not be discovered by reason, because it is unreasonable.

Anna, perhaps, lives more according to reason, opposing those who hinder the satisfaction of her desires. Levin, in contrast, embraces here an ethos of love, but a different kind of love than the gratification of vanity and ego that defines Anna and Vronsky’s love. Levin’s is an ethical love, a love of the soul, a love of others. By the light of his love, we judge the moral failure of Anna’s; through his embrace of life, we condemn Anna’s choice of death.

And yet I’m not satisfied with this way of reading the contrast between them. For one thing, I can’t figure out how we are positioned relative to Levin’s revelatory statements here. Though he has often meditated on the meaning of life and the significance of death, he has never proffered a religious interpretation before. More, the sentiments he expresses here are so vague and ecstatic I find it hard to take them seriously as a response to the complicated world we’ve been living in with him. He declares that the “knowledge” he has acquired is “given to me as to everybody,” but we have hardly seen other people motivated by “the law of loving others.” Is the idea that Society–the same Society that crushed Anna’s more earthly desires–also crushes spiritual idealism, so that Levin’s story doubles up on the social criticism of Anna’s, while also holding out (as her story does not) a standard by which a better world could be established? Or is it possible (because Levin seems kind of an erratic, ineffectual figure for a heroic protagonist) that he’s modelling another kind of folly, rather than an ideal? What kind of noble life is truly possible without reason, after all? His final assertions of revelation depend on a resolute setting aside of hard intellectual problems (such as “the relation to the Deity of all the different beliefs of mankind”). Is this supposed to be right–never mind the details, just feel the truth in your heart? Or is it supposed to seem, as it does to me, a feel-good cop-out?

I’m sure that some of my confusion about Levin is rooted in my historical ignorance: much more than Anna, he is involved with social, political, economic, and, especially, agricultural questions specific to his time and place, and I don’t know the context well enough to understand what his particular efforts in these areas mean about his values. I’m not a trained historian of Victorian Britain, but when Caleb Garth confronts the farmers who oppose the building of the railway, or when Mr Brooke attempts to run for the Reform parliament as an Independent, I have some ideas about what it all means as part of the politics of Middlemarch. Here, though, I have no general background to prepare me, and my one complaint about the Oxford edition I was reading is that it is not really an annotated edition and so the many political and other references go unexplained. There are a small number of notes at the bottoms of pages (mostly translations of French phrases) but I would have appreciated a thicker layer of supporting information to help make the various councils and voting schemes and farming experiments a bit more … well, interesting. 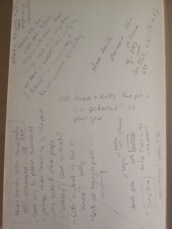 John Bayley also says little about Levin in his introduction to my edition, but he does suggest one way in which Levin’s story is thematically related to Anna and Vronksy’s: “His apparently causeless depression … relates to something which is also present in the Anna-Vronsky ménage,some primal dissatisfaction with the fact that one has gone one’s own way and should be happy, and yet one is not.” In Levin’s case, he should be happy with Kitty, the tedious embodiment of ideal, nurturing, maternal femininity who is everything that Anna is not (“is Anna the pit and Kitty the pedestal?” reads one of my marginal jottings) — except that Kitty (for all her nesting) is not so perfect, and Levin, as Bayley says, does not subside into bliss on marrying her. As with Anna and Vronsky, we see with Kitty and Levin the close proximity of love and possessiveness, the neediness, the jealousy. When they are happy, they’re kind of boring, aren’t they? So it doesn’t seem as if they are the “ought’ to the other pair’s “is.” Maybe the most that can be said is that they are basically nicer people than Anna and Vronsky, more sincerely concerned with the well-being of others. Maybe Levin looks for transcendent meaning but we should not.

2 thoughts on ““And such is the meaning of all existence!” Levin and Anna Karenina”