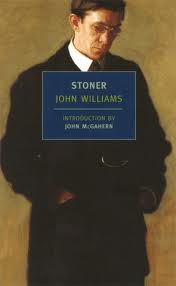 I’ve finished Stoner, and I’m still uncertain how I feel about the way Williams handles his academic context. Far from ending it awash with nostalgia for an era before the intense professionalization of literary studies (and the academy more generally), I actually found myself thinking that it makes a case (albeit indirectly) for greater professionalism, given the ways Stoner’s career is hampered and diminished by the pettiness of colleagues and the lack of clear and consistently enforced policies about everything from graduate admissions to workload! And just what he does as a professor remains quite vague, though we are told repeatedly how hard he works, what long hours, and so on. But even though I couldn’t entirely shake off these concerns about the imprecision of this aspect of the novel, I did end up feeling that his academic life wasn’t really–or at least, wasn’t entirely– the point. I’m not sure the novel would have worked no matter what job he had, but it’s a story about one man’s life and death in a more abstract way, about the experience of being Stoner, of having his feelings and hopes and setbacks and disappointments. I suppose the academic job helps to establish him as someone whose hopes and expectations are of a particular kind: intellectual, perhaps also spiritual, though not religious. His conversion to English studies does, actually, have something of the aura of a religious conversion, as he listens to a Shakespeare sonnet and finds his perception of the world transformed:

The thin chill of the late fall day cut through his clothing. He looked around him, at the bare gnarled branches of the trees that curled and twisted against the pale sky. Students, hurrying across the campus to their classes, brushed against him; he heard the mutter of their voices and the click of their heels upon the stone paths, and saw their faces, flushed by the cold, bent downward against a slight breeze. He looked at them curiously, as if he had not seen them before, and felt very distant from them and very close to them. He held the feeling to him as he hurried to his next class, and held it through the lecture by his professor in soil chemistry, against the droning voice that recited things to be written in notebooks and remembered by a process of drudgery that even now was becoming unfamiliar to him.

Implicit in this (and perhaps throughout Stoner, though here again the vagueness of its treatment makes me uncertain) is an idea of literature that is at once elevating and profoundly anti-intellectual (there’s no mention of any analysis of the sonnet, any contexts provided for it, not even any commentary on its formal elements). The introduction to this edition quotes Williams objecting, in a “rare” interview, to the idea that “a novel or poem is something to be studied or understood rather than experienced,” but there’s no reason why these must be antagonistic approaches, and in his sympathetic portrayal of Stoner, who does, after all, dedicate himself to studying and teaching literature, Williams does not seem to rule out the possibility that analysis can further the “joy” he claims in the interview is the purpose of reading. Through Stoner’s relationship with Katherine Driscoll late in the novel, we are told that Stoner reconciles “the life of the mind and the life of the senses,” after having come to believe, “without ever having really thought about it, that one had to be chosen at some expense of the other.” This discovery motivates and enhances Stoner’s research as well as his teaching–but we have had only the most impressionistic sense of his work before this: this emphasis on a conflict between head and heart comes upon the novel somewhat belatedly, I think, and thus does not stand as an overall gloss on the novel’s presentation of academic life.

But as I said, I don’t think Stoner really is an “academic” or “campus” novel at heart (though I’d be curious to know what other readers think). It’s more a portrait or character study, of a protagonist whose life comes to be defined by his inabilities to transcend his petty circumstances or his vexed relationships with the people in his life who misunderstand and thus inhibit him (most notaably his parents) or those who actively hamper his attempts at happiness. The story is beautifully told, with economy and restraint but also, as the quotation above shows, with compelling details and often real and moving eloquence. I felt the novel’s power most strongly in the final chapter. I felt most distant from it as it told the story of Stoner’s marriage to the neurotic, unstable, passive-aggressively vindictive Edith. There seemed something tediously predictable about the tale of a man whose potential is hindered by his foolish infatuation with the wrong woman, a man whose path is beset with obstacles because of her unreasoning opposition and inability to love.  In its own way, I think Stoner represents yet another variation on what Nina Baym labels the “melodrama of beset manhood” (see here and here for some explorations of how this myth of what constitutes a “great” American novel may still be reflected in contemporary fiction, or in how contemporary fiction is received). Katherine Driscoll provides a foil to Edith, of course, but she’s used primarily to show a better but inaccessible option for Stoner, one more thing that his bad wife and nasty colleagues drive out of his reach. That Stoner’s working world is primarily masculine (Katherine, a visiting “instructor” who is finishing her dissertation, is the only academic woman we meet) is to a large extent a historical phenomenon, but it’s interesting to consider the contrast between Stoner and Private Life. Smiley’s novel covers much of the same chronological period but gives a very different impression of its protagonist’s relationship to the wider world. In Stoner the focus really is intensely singular. I enjoyed Private Life more, but Williams has the edge in eloquence and beauty of style. More than any of the other issues and ideas I have touched on here, a moment like this gets to what I ultimately felt was the heart of the novel:

There was a softness around him, and a languor crept upon his limbs. A sense of his own identity came upon him with a sudden force, and he felt the power of it. He was himself, and he knew what he had been.