I leave tonight on the red-eye for Heathrow. The last time I was in England I celebrated my 19th birthday at Hampton Court: 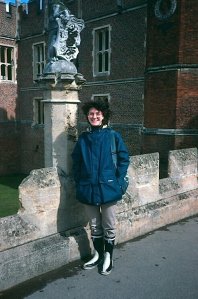 (It was the eighties, which excuses the glasses. I’m afraid there is no good excuse for the boots–though we were there in March and it was pretty damp and muddy everywhere.) So it has been a long time–OK, 23 years–since I was there, and I’m very excited about this trip. Last time I was there as a prospective history major with a lingering obsession for Richard III:

This time my interests are a bit different–and my time is much shorter. I’ll be in Oxford for three days and then in London for just about a week, which is not nearly enough time but will have to do. In Oxford I’m staying in a little hotel right across from Peter Wimsey’s college. The last time I was in Oxford I had never read Jude the Obscure; I wonder if the city will look more depressing this time. In and around London, I’m going back to Hampton Court, and to the Tower (both are having Henry VIII exhibits, as if they knew I was coming, though actually I probably have The Tudors to thank for this), of course, and to the Dickens Museum and the Carlyle House and the British Museum and the National Portrait Gallery and …

I will probably find it hard to leave the internet alone entirely, but I don’t expect to be posting anything here. When I get back, it will be time to start Villette!