Our local bus company is refusing to carry ads from Humanist Canada because they “could be controversial and upsetting.” The dangerous text? “You can be good without God.” Controversial and upsetting? Isn’t this just a fact? Throughout history and around the world, people without a belief in “God” (by which, in common usage, we mean the God of the major monotheisms)–whether humanists, skeptics, agnostics, atheists, Buddhists, Hindus, etc.–have lived highly moral lives; many of them have also contributed substantially to the development of a more just, good, and beautiful society. It’s outrageous, and should be plenty “controversial and upsetting,” to insist otherwise. Is the side of a bus the appropriate place to convey this common sense message? Well, I don’t see why not: a pretty wide range of goods, services, and opinions are advertised there already. And the comment that “the transit authority would reconsider its position if Humanist Canada toned down its message” is truly stunning. Nothing about “you can be good without God” is an overstatement, and the tone is no more than declarative. It’s a far less provocative message than the one on display in London, “There’s probably no God. So stop worrying and enjoy your life”–and even that is much more evasive than any religious billboard or bumper sticker I’ve ever seen (now that this “truth in advertising” precedent has been set, can we look forward to signs that read “Jesus Maybe Saves,” or pronouncements that “There is probably no god but Allah”?). But it’s not Metro Transit’s decision that really irks me, but the immediate and predictable storm of protest that this represents an unacceptable assault by atheists on religion. Again, it’s a fact that religion is neither a necessary nor a sufficient condition for virtue. The level of “debate” in the comments thread at the CBC site is so abysmal I can’t see any value in contributing to it. Instead, here is a re-run of a related post from my archives. Embedded in it is an excerpt from a conference paper I presented at ACCUTE in 2006 called “George Eliot: Moralist for the 21st Century.” Today I would particularly draw attention to the quotation near the end of the post from Eliot’s essay “Worldiness and Other-Worldliness: The Poet Young”:

‘And in opposition to your theory that a belief in immortality is the only source of virtue, I maintain that, so far as moral action is dependent on that belief, so far the emotion which prompts it is not truly moral—is still in the stage of egoism, and has not yet attained the higher development of sympathy. In proportion as a man would care less for the rights and the welfare of his fellow, if he did not believe in a future life, in that proportion is he wanting in the genuine feelings of justice and benevolence…‘

Compelling arguments can be made, in fact, that being good because of God (while obviously better than being bad) is a lesser form of morality, one that substitutes extrinsic reasons, hope of reward, and fear of punishment for a commitment to the intrinsic value of doing what is good and right. 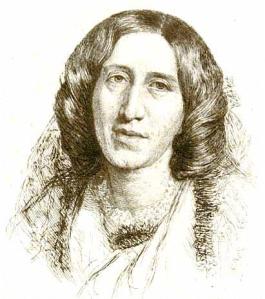 I’ve read a number of reviews lately on the spate of books by the ‘new atheists,’ notably Sam Harris, Richard Dawkins, and, most recently, Christopher Hitchens. Among the many interesting features of these reviews is how often they protest against the tone of the books, even if they agree with their arguments. A lot of people seem worried that a world without religion will be either a coldly austere, heartless place, or a chaotic place with no moral principles or values drawing people into communities. The complaints about the harsh tone of these books seem motivated by these fears, as well as by the widespread (but, as Harris especially would argue, misguided) attitude that whatever our own views on religion, we ought to treat it with respect. They are also often accompanied by the complaint that writers like Dawkins and Harris are taking away beliefs that bring comfort or satisfy emotional and aesthetic needs, without offering up anything to replace them.

I don’t personally think there is any obligation for critics of religion to be nice, or for them to make up for whatever people may feel has been taken away from them along with their superstitions. And, in fact, all three of the writers I have named have plenty to say about ways an atheistic worldview can enhance, rather than inhibit, our emotional, moral, and aesthetic experiences and sensibilities. But it’s clear that their case is not always persuasive, particularly to those readers who most need persuading. Because I think the world would benefit if they were victorious in their campaign on behalf of reason and evidence, I think they should call in some allies who can help them past what may be primarily a problem of genre. In addition to making the case against religion, they need to help people move imaginatively towards a world in which it is no longer necessary. Who better to assist in this endeavour than George Eliot, who was, as noted by one of her contemporaries, “the first great godless writer of fiction”?

Of the three writers I’ve named, Hitchens makes the most explicit appeal to literature. In god is not Great, he remarks that atheists “are not immune to the lure of wonder and mystery and awe: we have music and art and literature, and find that the serious ethical dilemmas are better handled by Shakespeare and Tolstoy and Schiller and Dostoyevsky and George Eliot than in the mythical morality tales of the holy books” (5). Later, he notes that the “study of literature and poetry, both for its own sake and for the eternal ethical questions with which it deals, can now easily depose the scrutiny of sacred texts that have been found to be corrupt and confected” (283). This general position is one with which I have great sympathy; it is also one which, though without explicit reference to replacing theistic moral systems, is much considered in the work of contemporary moral philosophers such as Martha Nussbaum who are exploring the contributions literary forms make towards our ethical understanding. But Hitchens could get a lot more specific about just how George Eliot is useful to his project. Here are some excerpts from my paper “George Eliot: Moralist for the 21st Century” that suggest how her ideas, particularly as given literary form through her fiction, might complement his and the others’ work and contribute to forming what Ronald Aronson in The Nation describes as “coherent secular popular philosophies that effectively answer life’s vital questions.”

[A recent University of Minnesota study] found that many people consider atheists “self-interested individuals who are not concerned with the common good” (Edgell et al. 227). The researchers conclude that “Americans construct the atheist as the symbolic representation of one who rejects the basis for moral solidarity and cultural membership in American society altogether” (230). However contingent the relationship between morality and religion may seem in academic or philosophic circles (witness the decisive critiques of divine command theory in analytic ethics, for example), most of our real-world compatriots are convinced that morality will break down without religion, with dire consequences for human flourishing. To correct this mistake—to lay these fears to rest—we could really use George Eliot’s help.

As her contemporaries noted, George Eliot’s novels portray “a world of high endeavour, pure morality, and strong enthusiasm, existing and in full work, without any reference to, or help from, the thought of God” (Mallock 698). After her own de-conversion from Christianity, Eliot worked tirelessly to develop a secular, humanistic framework for morality. As is well known, she believed, with Feuerbach, that people have given the name “God” to qualities and aspirations of their own, that motives and accomplishments called “religious” and credited to supernatural forces are really the products of human effort, of the human capacity for generosity, sympathy, and love—but also egotism, pettiness, and hatred. In her deterministic universe, we are responsible for our own deeds and their consequences, for our own contributions to, or obstructions of, the “growing good of the world” (Finale). She rejected extrinsic motives for good behaviour, including appeals to the “glory of God” or hope of an afterlife, arguing eloquently that “the immediate impulse of love or justice … alone makes an action truly moral” (rev. of Constance Herbert 322). These are components of an ethos that seems highly conducive to “moral solidarity” and “the common good.”

More important than her specific conclusions, though, is her resolve to work with the facts of human existence rather than comforting fictions. She did not deny the austerity of non-belief, but she agrees with Harris that “the fact that unjustified beliefs can have a consoling influence on the human mind is no argument in their favour” (67). The “‘highest calling and election’,” she asserted, “is to do without opium and live through all our pain with conscious, clear-eyed endurance” (Letter 254).

Other examples of George Eliot’s own statements on the relationship between faith and morality include this, from “Worldiness and Other-Worldiness: The Poet Young”:

‘And in opposition to your theory that a belief in immortality is the only source of virtue, I maintain that, so far as moral action is dependent on that belief, so far the emotion which prompts it is not truly moral—is still in the stage of egoism, and has not yet attained the higher development of sympathy. In proportion as a man would care less for the rights and the welfare of his fellow, if he did not believe in a future life, in that proportion is he wanting in the genuine feelings of justice and benevolence…’

And this, from her letters, a simple statement that would have revolutionary consequences if applied instead of many of the doctrines put forward in the world’s sacred books:

Our moral progress may be measured by the degree in which we sympathize with individual suffering and individual joys.

These are all philosophical statements, but George Eliot opted to give her ideas fictional form so that we would not just understand them intellectually, but experience them as principles operating in the world of human feelings, histories, and relationships. I have written more about this choice elsewhere. For my purposes now, I’ll just say that this choice of genres allows her to show us morality and community both flourishing and faltering as the result of human character and human choices. The mathematician Laplace famously replied to Napoleon, when asked about the role of God in his view of the universe, that he had “no need of that hypothesis.” Through her novels, George Eliot helps us understand that we too have no need of it, and that we will do better by ourselves and by others when we acknowledge our own responsibility for the world we live in and the rules we live by.