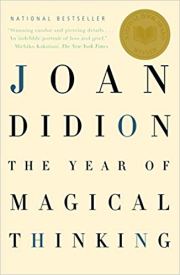 First of all, The Year of Magical Thinking is a strange kind of book. It is intensely personal, and thus poignant and compelling in the intimacy of its revelations about Didion’s grief, but thus also the reading experience seemed to me oddly voyeuristic–which made me puzzle over why someone would want to publish such an account. I didn’t notice that this issue is ever explicitly addressed, though I suppose we can fill in some good guesses, such as the therapeutic effects of writing it all out, the opportunity to pay a kind of literary tribute to her husband, or just the idea that writing is, after all, what a writer does.

The book is full of mundane details, those that arise because of what Didion evocatively refers to as vortices, moments that propel her into chains of memories. The very ordinariness of life becomes extraordinary when you realize, as the events of this year bring Didion to realize, that all is subject to dramatic, irrevocable change without warning: you sit down to dinner, as she says, and life as you know it ends. In such reflections lie the book’s message for its readers, the ideas about the fragility of everything and everybody we take for granted. These ideas seem commonplace themselves, and yet through the very particularity and idiosyncracy of her account Didion gives them new urgency. “I didn’t appreciate it enough” is one of her refrains.

While there is something inevitably egotistic about supposing there’s an audience for such a personal account of a year in her life, writing of all kinds always has at least a shade of such arrogance. And as the many quotations and allusions woven into her text remind us, loss has often become literary. Didion never quotes “In Memoriam,” but many moments in this book reminded me of Tennyson’s image of his own verses as “short swallow-flights of song that dip / their wings in tears and skim away.”