As a member of Jo VanEvery’s Academic Writing Studio (which I highly recommend, by the way, if you need a bit of structure, encouragement, and/or advice), I receive her helpful weekly newsletter by email. Last week’s had the timely subject heading “It’s June! You Are Not Behind,” and included the calming observation that “you may not be where you thought you’d be or where you wanted to be on the 1st of June. But you are where you are.” I thought I’d use this post to follow her advice and take stock of where I am and where I should be going next.

Jo’s not wrong when she says “June may have snuck up on you.” One reason June’s arrival can feel sudden and thus disconcerting for me is that it follows immediately on May–which is obvious, of course, but here’s the thing: every year it seems as if May should be the real start of the summer writing season, but every year I realize, as if for the first time, that May is actually the end of the previous academic term, and the transition to the summer. Exams finished here in late April, and though my only exam was relatively early, the practical result was not that I could get my marking done sooner but that the 90 exams came in while I was also receiving final papers in both courses. April was nearly over by the time I had filed my grades. Then there is always a flurry of committee meetings. In the English Department, they usually culminate in our annual May Marks Meeting, which requires a lot of preparation from the Undergraduate Committee, which I am on. The work is mostly done by its chair (not me right now, happily), but in consultation with the other members.  Because our department underwent a review this year (an institutional requirement involving both internal and external reviewers), and because of the wave of retirements we are experiencing, we also held a full-day “retreat” to talk about the kinds of stress our program (and faculty) are under and how we might respond.

For me personally, the “retreat” (how I hate that term, which falsely suggests there’s something soothing about being closeted for hours with my colleagues and having to talk about fraught topics about which in some cases we profoundly disagree) was extremely stressful and undid some of the progress I’d made, post-promotion-debacle, towards restoring my trust in our collective operations and feeling once more like I have some kind of intellectual home here. I know it was undertaken with the best of intentions, but my experience of the day was that the event, which was pitched as an opportunity for “open” discussion, ended up feeling uncomfortably like an occasion to push us in a pretty specific direction–one much more aligned with the “skills” argument than with the actual content (for want of a better word) of what most of us study and teach. We’ll see how this plays out, and I may also be reacting to the loudest and most persistent voices rather than to any genuine underlying consensus that this is how we should seek to define ourselves–but I certainly left in a hurry and in a funk at the end of the day, and it has taken a while for the bitter aftertaste to wear off.

Anyway, Jo recommends taking stock of what we did accomplish in May, and dealing with meetings and administrative tasks was a big part of that. I also completed the final draft of a report: I was part of the Faculty of Graduate Studies’ internal review committee for the King’s MFA in Creative Nonfiction (spoiler: overall, it’s a great program). I returned comments on a Ph.D. thesis chapter. I’ve written a couple of reference letters. I submitted three writing assignments, all relatively short but each posing its own kinds of challenges: an “In Brief” review for the TLS, a review for Quill & Quire, and a guest post for Sarah Emsley’s series “Youth and Experience: Northanger Abbey and Persuasion” (it will be up on her blog later this month). My post for Sarah is pretty personal, which actually made it harder to write, for reasons that are explained, at least by implication, in the post itself.

One of the things I’d intended to do in May is work out a definite plan for some larger writing projects to focus on over the summer. For some reason I have found this very difficult to do: I have sketched out and even done scraps of writing for a lot of possibilities but I have struggled to commit to any one of them. I have continued to explore places to pitch pieces that aren’t book reviews, and I have some ideas I like, as well as a firm commitment to doing a piece for The Reader, a publication I have long admired for its combination of sophistication and accessibility. I really want to get back to writing about George Eliot; I think what I may need is to stop focusing on venues for a while and just write, the way I could when I always had the option of running something in Open Letters Monthly. Trying to think of the pitch first becomes an exercise in self-defeating second-guessing. Getting going on this–whatever it turns out to be–is a top priority for me this month. 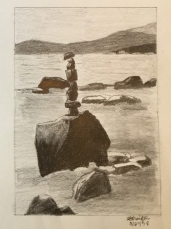 These are all work things, and of course that’s never everything that’s going on. Maddie had her wisdom teeth out on May 18th, for example, and that meant a week or so of disruption (and a lot of smoothies) while she recovered, but she is basically better now. As previously mentioned, I’ve been taking a drawing class; I’ve been feeling much better about it since I learned it was okay to copy pictures, which removes a lot of the frustration of trying to get proportion and perspective right on my own. I’ve been enjoying my practice sessions a lot more, as a result, and that in turn is building up my confidence–I even sat on our back deck on the one really hot day we’ve had so far and tried to draw the trunk of our big elm tree (not bad) and our small stone wall (not so good). After my initial discontent, I am now definitely glad I decided to try this. In addition to the intrinsic satisfaction of creating something (not that copying is that creative, but it’s a step towards it!), I often spend a lot of time alone, especially in the summer, and being able to bring along my sketch pad and pencils to someplace like Point Pleasant Park or the Public Gardens will be a nice substitute for company.

Last but not least, Edna O’Brien’s The Little Red Chairs ended my reading slump; I picked up Kamila Shamsie’s Home Fire and Ottessa Moshfegh’s Eileen on the weekend and feel excited to start both of them–though right now I’m actually reading Ann Cleeves’ Thin Air, to see if I like the books Shetland is based on as much as I liked the series. (So far, I don’t.) I’ve realized that getting out of the reading doldrums is not just important for me personally: I rely on my underlying enthusiasm about reading to keep me motivated about my writing projects, most of which now are done not because of any external demand but because I want to do them, because I think they matter in some way. When I feel myself getting bored or disillusioned or disconnected from the current literary conversation, it gets much harder to see why or how I should contribute to it.

So: that was May. Jo is right: it’s useful to reflect. Though there were long spells last month when I felt extremely grim and unproductive, it turns out I still got quite a lot done, which is reassuring, but that there are also things I really want to do next, which is bracing.