That’s not actually the title of any of P. D. James’s novels, of course: it’s the basic plot of Death in Holy Orders, which I just finished rereading for the first time in a decade or more. Coincidentally, when I picked it more or less randomly out to revisit, I had also just reread Trollope’s The Warden, and so I had rigidly self-righteous Archdeacons on the brain even before James’s Archdeacon Crampton met his bloody end–then James herself made the Trollope connection explicit by having one of her characters read aloud from Barchester Towers with the deliberate intent of “discomforting the Archdeacon.”

The passage he reads is from the novel’s first chapter, in which the gentle and unworldly Bishop (known to us from The Warden as Mr. Harding’s great friend) is on his deathbed. “Nothing could be easier,” Trollope’s narrator assures us, “than the old man’s passage from this world to the next.” Things are more complicated, however, for his ambitious son, Archdeacon Grantly:

By no means easy were the emotions of him who sat there watching. He knew it must be now or never. He was already over fifty, and there was little chance that his friends who were now leaving office would soon return to it. No probable British prime minister but he who was now in, he who was so soon to be out, would think of making a bishop of Dr. Grantly. Thus he thought long and sadly, in deep silence, and then gazed at that still living face, and then at last dared to ask himself whether he really longed for his father’s death.

The effort was a salutary one, and the question was answered in a moment. The proud, wishful, worldly man sank on his knees by the bedside and, taking the bishop’s hand within his own, prayed eagerly that his sins might be forgiven him. 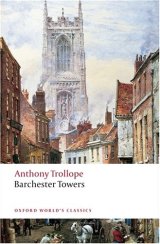 It is, as the provocateur who reads it aloud remarks, “one of the most impressive chapters Trollope ever wrote,” full of pathos, moral tension, and psychological insight. Our disgust at the Archdeacon’s selfishness is quickly countered by his own rueful self-knowledge and sincere penitence–and by Trollope’s explicit rebuttal of those who think he was “wicked to grieve for the loss of episcopal power, wicked to have coveted it, nay, wicked even to have thought about it, in the way and at the moments he had done so.” Ambition is natural in any profession, Trollope notes, and we “can hardly hope to raise the character of the pastor by denying to him the right to entertain the aspirations of a man.”

He rose with even greater vehemence to Archdeacon Grantly’s defense at the end of The Warden, a defense not against imagined external critics but against his own authorial choices:

We fear that he is represented in these pages as being worse than he is; but we have had to do with his foibles, and not with his virtues. We have seen only the weak side of the man, and have lacked the opportunity of bringing him forward on his strong ground. . . . On the whole, the Archdeacon of Barchester is a man doing more good than harm,—a man to be furthered and supported, though perhaps also to be controlled; and it is matter of regret to us that the course of our narrative has required that we should see more of his weakness than his strength.

Trollope typically resists absolutes of either virtue or vice–and that is one reason murder of the particularly calculated and brutal kind that takes place in Death in Holy Orders is so unimaginable in his world. Its cruelty and its finality obliterate ethical ambiguity; such an act disallows the nuance that is Trollope’s moral stock-in-trade.

That said, James and Trollope  do have a lot in common. James herself points to Austen, Eliot, and Trollope, rather than the Gothic or sensation novelists, as her chief fictional influences, and you see it in her patient, probing characterization as well as her meticulous attention to setting. Reading Death in Holy Orders so soon after The Warden I was struck by their shared interest in the Anglican Church as an institution defined both by its corporate identity and by the characters of the individual men who embody it, with their ideals and their faith but also their ambition, greed, and vanity. Both novels also depict the Church as an institution in which continuity and tradition are under constant pressure from changes without and within, and in which the laudable aim of preserving what is good can too easily be twisted into a justification for tolerating what is bad.

In both books, too, it is the self-righteous Archdeacon who epitomizes many of the worst tendencies of the priesthood they belong to, including self-righteousness, arrogance, and a preoccupation with worldly practicalities. While Trollope, as shown, wraps Archdeacon Grantly in the protective padding of his own humane understanding, James and her characters show no such forgiveness towards Archdeacon Crampton, who is universally hated. This is a formal necessity in a murder mystery, to be sure: more than one person must have a sufficient motive to be a plausible suspect, or where’s the puzzle? But it’s the specifics that are thematically revealing–and that turn out, in James’s case, to be a bit disturbing.

If Crampton, like Dr. Grantly, were “a fitting impersonation of the church militant here on earth,” a rigid defender of the status quo, the dislike both Archdeacons provoke could be neatly interpreted (as I think it can be, in Trollope’s case) as a call for the Church to reform, to live up to its professed spiritual ideals rather than insisting indignantly on its worldly authority and privilege. Instead, however, it turns out that one of the main reasons Crampton is disliked is that he was overzealous (as the other characters see it) in prosecuting a priest, Father John, accused of sexually molesting young boys. “The offences had been more a question of inappropriate fondling and caresses than of serious sexual abuse,” reflects Father Martin, another of the priests at the Seminary where Father John now resides, and the punishment might have been light if Crampton hadn’t “busied himself in finding additional evidence,” as a result of which Father John ended up serving time in jail. Father Martin considers Crampton’s pursuit of Father John “inexplicable”: “there was something irrational about the whole business.”

Everyone at the Seminary is sympathetic towards Father John, who seems as kind and unworldly as Trollope’s aged Bishop. If their tolerance were shown as priests closing ranks to protect one of their own, or the Church more generally, from damaging exposure, that would be one thing: then, again, a critical inference could be drawn–especially if solving the murder required them eventually to confront and regret their defense of a convicted pedophile, however otherwise likable he might be. Alternatively, I suppose, Father John’s case could have been used as an explicit model of sin, penance, and forgiveness: he has done his time, and if he were remorseful it could be worth exploring how or whether he was entitled to regain his standing in the Church. Unfortunately, though, the novel overall offers nothing to counter Father Martin’s perspective that Father John has been hard done by: that he has been punished with undue severity for a little harmless “fondling” of choir boys. It’s not just his fellow priests but also Emma Lavenham, English professor and emergent love interest for Commander Dalgliesh, who treats him with indulgent kindness; Dalgliesh himself, James’s moral avatar, expresses more concern about Father John’s trial and imprisonment (“which must,” he reflects, “have been an appallingly traumatic experience”) than he does about the priest’s young victims, whose trauma goes unacknowledged by anyone. Apparently it’s not that the Church needs to be held accountable for enabling and sheltering Father John but that his accusers, the Archdeacon among them, by making much ado about almost nothing, should be ashamed for blighting a good man’s life.

Death in Holy Orders does not ultimately turn on Father John’s history with the Archdeacon; his backstory is not central to the murder investigation but simply adds another (supposedly) unpleasant dimension to what we know about the murder victim. I suppose that could be an argument for not paying too much attention to it, except that the more I think about it, the more creepy that makes its treatment. It’s hard not to conclude that James herself considers accusations of that sort incidental–a lot of unnecessary and damaging fuss in a world, and a Church, with bigger problems. Surely, though, her reforming Archdeacon deserved at least as vigorous a defense as Trollope’s: that James allows Crampton to die cruelly and unmourned puts James out of step with the literary lineage she claimed.